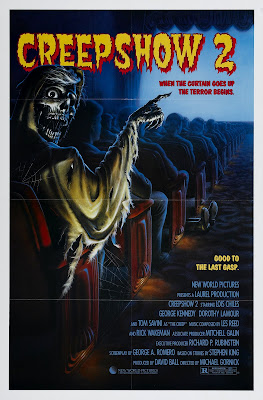 #6 CREEPSHOW 2 (1987) - A wooden Native American statue that comes to life and kills people, a man-eating blob that lives in a lake, and a hit n' run that comes back to haunt a careless driver. Not a "George Romero movie" per se, I still consider this one to be part of his back catalog despite his only involvement being as a screenwriter. The reason for that is because I think of this film and its predecessor, the original CREEPSHOW (duh), to be one in the same. Saw them both as a young kid and, as a result, they each hold a special place in my heart - not only in terms of Romero's films, but horror anthologies and horror movies in general. Depending on what day of the week it is, what the weather's like, etc., I consider this one to be my favorite of the two, if only for nostalgia reasons. I've never looked at Native American statues the same since, but thankfully it's not often that I see one. The image of the blob coming out of the lake has stuck with me through the years and is one of the things that has contributed to my longlasting fear of dark water. And hitch-hikers at night? Yeah, fuck that. 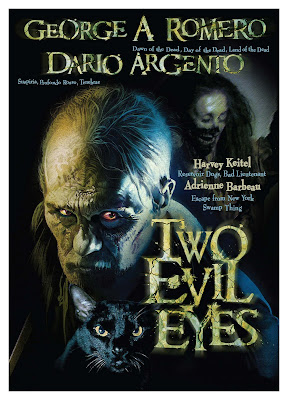 #7 TWO EVIL EYES (1990) - This is a two-segment horror anthology film, with the segments individually directed and written by Dario Argento and George Romero (Argento's was co-written with longtime collaborator Franco Ferrini). Romero's segment stars Adrienne Barbeau, and it's basically about a woman whose dead husband comes back to haunt her. As a whole (including Argento's segment), TWO EVIL EYES is a decent horror anthology and tribute to Edgar Allan Poe. A bit uneven because of the contrasting styles of both filmmakers, but effective and entertaining nonetheless. Romero's segment, in my opinion, is the stronger of the two. Not a very original piece, but otherwise solid. Supposedly there's a social commentary on capitalism somewhere in Romero's segment as well, but whatever. In comparison to Argento's segment, Romero's is paced much better and doesn't really beat around the bush with the story that it's trying to tell. It gets right to the point, handles its business, and then its gone. Great score by Pino Donaggio and all around good performances from the cast.
Posted by Aaron at 6:01 AM