7TH DAY is an independently-produced splatter film, and it follows a socially-inept dishwasher named Allen, who moonlights as a serial killer. Through Allen's narration, he claims to be a normal dude who simply kills people as a hobby, but, as the film goes on, his schizophrenia and sociopathic tendencies are gradually exposed and it becomes quite obvious that he's far from normal. He prowls the streets (and the woods) while wearing a pulled-down baseball cap, Aviators, and a Member's Only jacket looking for what he refers to as his "selections" (his victims). Once he finds a "selection" (a young woman in most cases) he murders them on the spot and then takes their bodies back to his decrepit home, where he does unspeakable things to the corpses. 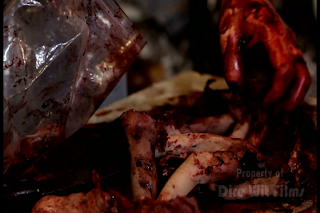 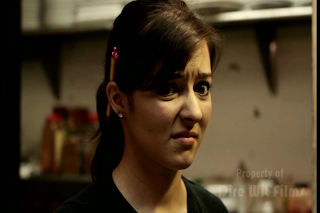 Yeah, it's that kinda movie.

What separates this from the pack is the narration that I mentioned earlier, but that doesn't necessarily mean it's any better or worse - it's just different. If anything, I'd say it leans more towards the latter though. Throughout the film, Allen is essentially guides us through his daily routines of soiling himself, behaving awkwardly, living in filth, and killing people - in the process, he talks a lot. Not out loud, mind you, but through voiceover. He tries to justify his actions, and at first you don't really know just how crazy he is, but eventually the film's visuals start to betray his words. The narration is fine at first, because it's a quick way for us as viewers to get inside his head and learn about him. The problem, ultimately, is that there's way too much of it. It's easy to grow tired of hearing him constantly talk and whine. The voiceover also lessens the effectiveness of the film's nihilistic outlook in my opinion. He's supposed to be a heartless murderer, but the actor's delivery makes Allen sound like someone who's just fed up with his desk job or something. 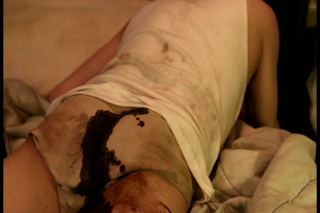 On the plus side, one of the things I love about this movie is a recurring character who's a figment of Allen's imagination and a manifestation of his schizophrenia. Anyone who watches DEXTER is aware of the fact that its lead character often speaks of a metaphorical "dark passenger". Well in this case, Allen has a dark passenger in the literal sense. Occasionally, a phantom-like character will show up and appear as if he's interviewing Allen. The faceless character is equipped with microphone that looks like a leftover prop from TETSUO: IRON MAN and never says a word throughout the film, but he often appears by Allen's side as he's on the hunt or just sitting around in his disgusting home. This character is useless, but it adds something extra to the film that I appreciate. Plus, it just looks cool. 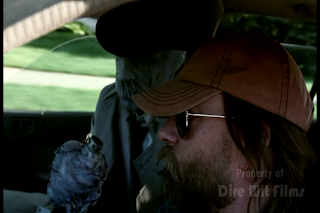 If you're someone who likes extreme gore and appreciates shock value, I have a feeling you'll like 7TH DAY. If there's one thing that this film knocks out of the park, it's indeed the gore and shock elements. I don't particularly seek out splatter films, but it's inherent that I find myself watching one from time to time, and I've seen enough to have been exposed to some of the more disgusting acts and scenes committed to film (or digital), but 7TH DAY is honestly one of the most nauseating and cringe-inducing films I've seen in quite some time - and I mean that in the best possible way. If you're gonna produce a gore film, you better make it count, and the people behind this film (namely director Jason Koch and the special effects team) went for broke in that respect. A lot of it seems to be shock for shock's sake, but that comes with the territory when you're dealing with films like this. Speaking of which, one of the only complaints I have regarding the shock value is how much the words "fag" and "cunt" are thrown around. I don't mind those words being used in film - especially in Exploitation - but the words seem forced in this particular case. 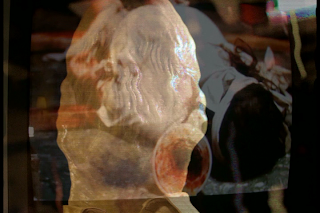 Basically, 7TH DAY is a miserable-ass movie. The song "R.V." by Faith No More kept coming to mind as I watched this - if you're not familiar with the song, it's essentially sung from the perspective of a white trash misanthrope. This is like CLEAN, SHAVEN mixed with HENRY: PORTRAIT OF A SERIAL KILLER, with a similar nihilistic view as I STAND ALONE - not in the sense that it's even close to being as good as those films, but it at least seems to be influenced by them, especially HENRY. I didn't particularly enjoy it, but it's mostly well-made for what it is, and it ultimately feels like a teaser for something bigger, in that it doesn't quite end like you'd expect. I think it would've benefited from a better cast and less voiceover, personally. I'm sure director Jason Koch will bring a lot to the table if he decides to stick to splatter and shock cinema, and this at least shows he has the potential to do interesting things in other genres if he goes that route.