Earlier this year I watched NIGHT TRAIN TO TERROR, which is easily the most bizarre Horror Anthology film I've ever seen. I knew nothing about it going into it, so when I later found out that it's comprised of footage from three feature-length films (one of which was shit-canned during production), it put the absolutely nonsensical NIGHT TRAIN TO TERROR into perspective for me. Turns out I'd already seen one of the feature-lengths, which is an odd supernatural flick called CATACLYSM. It also turns out that the three feature-lengths are all written by the same person (he also wrote BATTLE OF THE BULGE and EL CID!), so I'm sure that played a part in why footage was gathered from those films and pasted together for the entertaining trainwreck that is NIGHT TRAIN.

You're probably wondering why I'm talking about NIGHT TRAIN TO TERROR and not DEATH WISH CLUB. I'll get to that. Anyway, if I hadn't seen CATACLYSM beforehand, I doubt I would've ever sought it out based on what I saw of it in the anthology. But one of the segments in NIGHT TRAIN was so weird that I couldn't help but do some research on it. The story of said segment is as follows:

Boy meets girl. Boy gets lured into a "death club", in which participants are randomly killed by various contraptions. Girls turns into a boy for no reason whatsoever. The end. 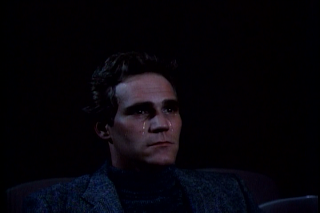 As I later found out, this particular segment in NIGHT TRAIN TO TERROR was a condensed version of a movie called - you guessed it - DEATH WISH CLUB. From what I gathered in doing research and talking to someone about it, the segment in NIGHT TRAIN completely omits an important part of the plot, in which a female character suddenly begins to identify as a male, which explains the randomness of this character's sudden sex change in the butchered segment. This all sounded too fascinating to pass up, and so I got me a copy of DEATH WISH CLUB and my mind was subsequently blown by what I saw. 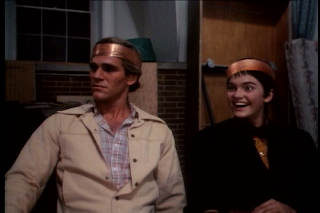 The film opens with voiceover from a character named George, who refers to himself as the "last of the great lovers." Turns out George is some bored rich guy who inherited money from his dead mother. He's also a fucking sleazebag, but, in his defense, he knows he's a sleazebag and will probably be the first to admit it. It's also revealed right away that he's looking for love, but he explains in the voiceover that he wants the love to be one-sided. In other words, he doesn't care about sex and doesn't want to be loved in return; he just wants to do the loving himself. Yeah, that doesn't make any sense, and this is only the first minute of the film we're talking about. 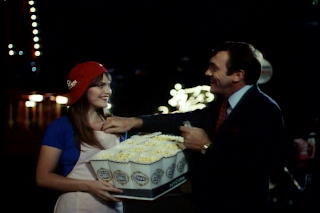 Anyway, he quickly finds the woman he's looking for as he's strolling around a carnival and spots a chick named Gretta, who's selling popcorn. "There's my little popcorn girl", he says as he stuffs money into her shirt. He also explains his reasoning for going to the carnival by saying "I love a lonely place. There's nothing lonelier than a carnival on a Saturday night." As far as Gretta, her main characteristics are that she hates wearing clothing, she swears a lot, and she seems slightly retarded. 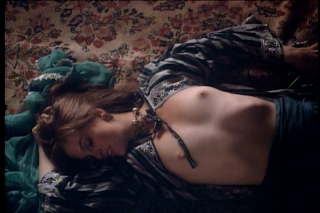 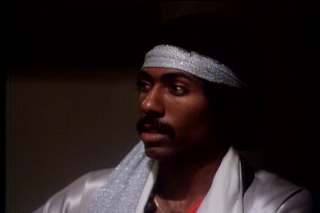 Normally this would be a spoiler, but considering it happens halfway into the movie, I think it's OK to say that Gretta suddenly dies, but she's revived at the hospital and comes back as a man named "Charlie White". A heartbroken Glen then spends the rest of the movie trying to convince "Charlie" that he's a woman and attempts to use psychology as a means of pulling Gretta out of Charlie's subconscious. And yeah, that's pretty much DEATH WISH CLUB - a bizarre love triangle in which the woman becomes a man, with the backdrop of this whole "death club" thing. It's fucking bizarre, but it's interesting to see how much it was butchered for NIGHT TRAIN TO TERROR. It should be said, though, that NIGHT TRAIN features some extra gore sequences that aren't in the feature-length film, including a scene where a giant beetle devours someone. 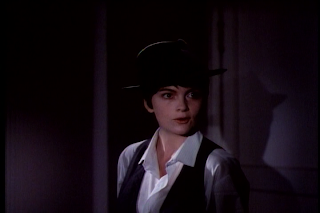 Surprisingly, DEATH WISH CLUB isn't the trainwreck I imagined it would be. At least not based on how its represented in the anthology anyway. Seeing as this was her only role, I was surprised by Merideth Haze's performance in particular as Gretta and especially as Charlie. The overall presentation of the film is devoid of style, so there's not much in the way of quality or flash, but it makes up for that with a fascinatingly weird storyline and tons of sleaze. It's also paced fairly well, consistently strange, and I found the characters to be really interesting despite the ridiculous scenarios they're placed in. For example, Glen is someone who I can kinda relate to - not in the sense that I've dated a woman who became a man, but because I tend to be attracted to fucked-up women. Despite the red flags, my track record would suggest that I'm like a moth to a flame when it comes to women with baggage, and I'm sure a lot of guys (and girls to be fair) can relate to that as well. Without turning this into a memoir of my failed relationships, I'll just wrap this up by saying DEATH WISH CLUB should be seen and talked about by more people, but the fact that it even exists is a huge accomplishment in its own right.