I reviewed a Frank LaLoggia film two Halloweens ago, so I figured I'd make it a tradition (a bi-yearly one apparently) by a covering another LaLoggia joint. FEAR NO EVIL now makes two Frank LaLoggia films that I've seen. I don't know much about the director, personally, but based on the two films of his that I've seen, it's evident that he's a filmmaker with his own cinematic voice. I'm not sure why he never took off as a horror director, but he should have. And, as I stated in my review of LADY IN WHITE, he seems like the nicest person ever. 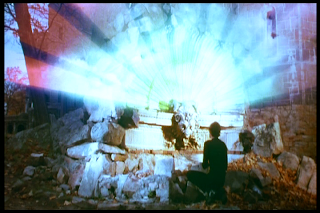 Going into this, I knew jack shit about it, but seeing that it was directed Mr. LaLoggia certainly piqued my interest. As flawed as I found LADY IN WHITE to be, it left a big impression on me. Fortunately (for me), a lot of his themes and his overall style were present and accounted for in this film. Anyway, FEAR NO EVIL is a supernatural horror movie with a Biblical theme. The film sees the rise of the Antichrist and his subsequent battle with three angels - all of whom inhabit the bodies of humans. In the case of the Antichrist, he's an effeminate high school student named Andrew. And it's not a matter of the Antichrist using a human body as a vessel; Andrew was born the Antichrist and his ultimate destiny has always been to unleash evil on the world. The angels, however, are a different story, and the manner in which they're portrayed is interesting. Throughout the film, the line is blurred as to whether the angels are the real deal or if they're actually just normal humans with delusions of a Second Coming. 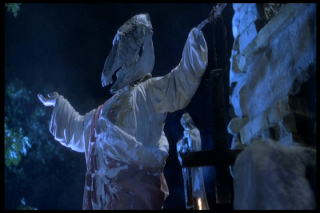 Right off the bat, I was impressed with the soundtrack. Much to my surprise, there are a number of songs of popular punk bands used in the film, from the Sex Pistols to the Ramones. The actual score, on the other hand, is courtesy of director Frank LaLoggia himself, which is also the case with LADY IN WHITE. In this case he had a collaborator, but the music sounds similar to LADY IN WHITE, in that it has a tendency to be a bit too bombastic and heavy-handed. The music is one of the many similarities between this and LADY. To add to that, there are hints of LaLoggia's personal life seeping through the characters and some of the film's scenarios. I can't confirm that, nor can I explain why, but his films seem a lot more personal than your average horror movie. Also, both the LaLoggia movies I've seen feature homoerotic undertones to a degree, and at one point FEAR NO EVIL veers off into full-on homosexual territory with its lead character (Andrew), who's clearly a closet homosexual. In a way, the manifestation of the Antichrist is a not-so-subtle analogy for Andrew's coming out. 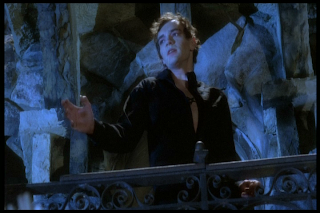 One of the disappointing things about FEAR NO EVIL is the minimal dialogue. There's never a lot of time spent with a single character as it jumps around from Andrew to the high school kids to the angelss. Despite the minimal dialogue (for a film like this anyway), there's a lot of depth to some of the characters, especially when it comes to the angels. There's more of a focus on the inherent spiritual elements (or lack thereof) of the characters, with the whole Biblical prophecy angle playing a major part in the story. In other words, you're not gonna get a group of pissed-off, Earthbound angels firing pistols at demons here. FEAR NO EVIL presents a very blue-collar, middle-class portrayal of a build-up to a war between good and evil. On what little I listened to of the DVD commentary track, LaLoggia claims that his original script was a lot longer than the one they ended up using for the film, which might explain the lackluster amount of focus on Andrew and other characters. 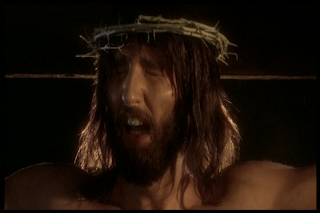 FEAR NO EVIL has some great production value when it gets away from the high school stuff and focuses on some of the more horror-related locations. For example, there's a castle that the film goes back to on a couple of occasions, and it's this particular setting where the insane climax takes place. Speaking of which, shit gets real about 75 minutes in when Andrew summons the dead and unleashes an army of zombies. Again, I would've liked to have seen the zombies play a bigger part in the climax, but they got a decent amount of screentime nonetheless. There's also a great sequence towards the end when mayhem ensues during a gathering in town, resulting in hundreds of extras running for their lives, trampling over each other, and, in some cases, falling victim to an invisible supernatural entity. 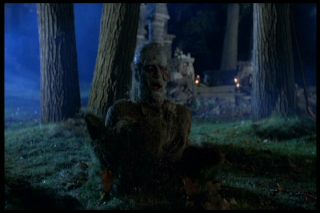 In the end, FEAR NO EVIL turned out to be an interesting mess of sorts, but admirable for a number of reasons. Like LADY IN WHITE, this movie feels like its coming from a sincere place and it's quite ambitious, but it falls short as a whole. And, again, this could go back to what LaLoggia said about his original vision of the film being compromised. Although, I'm not sure how FEAR NO EVIL would've fared as an "epic", so perhaps it's better that we got the condensed version. The best way that I can sum up FEAR NO EVIL is that it feels like a male version of CARRIE with a supernatural twist as opposed to telekinesis, or a punk rock version of THE OMEN, albeit not as tense or well-made as either of those films, obviously. Regardless, I'm looking forward to reviewing completing the Frank LaLoggia Trilogy in two years.