Land Of The Dead (2005): Guest Post by Richard of Doomed Moviethon 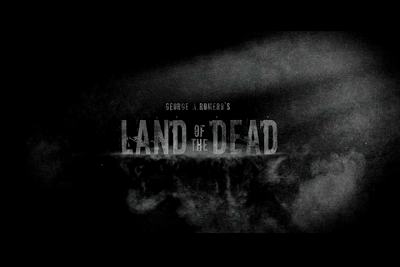 After having been traumatized by the original NIGHT OF THE LIVING DEAD when I was 11 years old, having the fire of my imagination stoked to unsafe temperatures by the original DAWN OF THE DEAD, and having my happy thoughts taken away forever by DAY OF THE DEAD, I was ready for whatever George Romero could throw at me with LAND OF THE DEAD. You see, I had made the mistake of renting 2000’s BRUISER expecting good things and just ended up feeling embarrassed for the legendary horror director. Deep down, I knew that Romero returning to zombies was a very good thing. 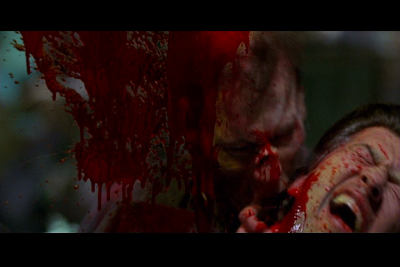 Of course, LAND OF THE DEAD probably would not have come about had it not been for the success of the 2004 remake of DAWN OF THE DEAD. I hate the friggin’ remake. Now I’m not saying it isn’t scary but when I walked out of the theaters in the spring of that year, I was more angry at DAWN OF THE DEAD than afraid of it (though those less-than-subliminal zombies in the closing credit sequence really did a number on me). Okay, I just went on a huge rant about why I think this particular remake sucks so much but sigh, I deleted it. This is neither the time nor the place. I will say that I think the budgets should have been more balanced out. The fact that DAWN had nearly twice the budget of LAND is complete bullshit. Let me just sum things up by saying that my hatred for the DAWN remake and my anticipation for a new Romero zombie opus were the perfect combination one summer night in 2005. You could say I was predisposed to love LAND OF THE DEAD.

The storyline of LAND OF THE DEAD puts the film some time after the events of NIGHT and DAWN have already taken place. The world is a shadow of its former self and a shady businessman named Kaufman (played by Dennis Hopper) has established a community called Fiddler’s Green where elite citizens are protected from the flesh-eating zombie hordes by his personal army. For the poor, it is a life of squalor outside the main skyscraper. Riley Denbo (Simon Baker) and his team go out scavenging for food and supplies in neighboring towns. Denbo and his friend Charlie (Robert Joy), a slow but immensely talented marksman, plan to retire and drive north to Canada in the hopes to find refuge from both zombies and people. Also employed by Kaufman is Cholo (John Leguizamo), a jaded zombie killer willing to clean up his boss’s messes for a shot at the big time. The only thing these two men have in common is their mutual hatred for their lots in life. 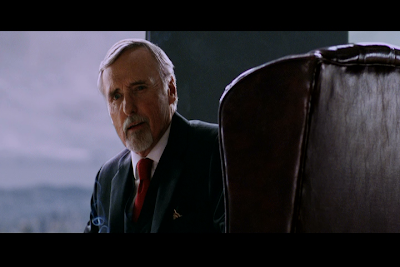 Denbo and Charlie get into hot water after rescuing a hooker named Slack (played by Asia Argento) from being eaten by zombies for the enjoyment of paying onlookers. It turns out that Slack was to be another in a long list of casualties in Kaufman’s effort to keep the peace in Fiddler’s Green. Meanwhile, Cholo discovers that Kaufman never intended to let him join the upper class. He then steals Dead Reckoning, an assault vehicle armed with enough firepower to destroy the city, and demands that Kaufman pay him millions of dollars. Kaufman lets Denbo, the one who designed Dead Reckoning, out of prison (along with Charlie and Slack) to go and stop Cholo.

The most amazing aspect of LAND OF THE DEAD is (no surprise) the zombies. While the humans are destroying each other with their petty power struggles, the zombies are starting to do something disturbing: they are evolving. A former gas station attendant and now zombie referred to as Big Daddy (played by Eugene Clark) is far more intelligent than his undead comrades. He is able to reason, strategize, and even feel emotions. Well, one emotion anyway and that is rage toward human beings. He sees humans as little more than marauders who oppress his kind. So a very pissed off Big Daddy gathers together a zombie army to invade Fiddler’s Green. Trust me, it’s not easy to decide who to root for. 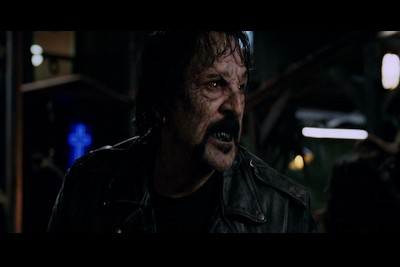 Romero’s financial woes on DAY OF THE DEAD (because he refused cuts and released the film as unrated) and subsequent changes to the screenplay are certainly far from an issue here. The director takes his largest budget since 1993’s THE DARK HALF and makes this movie seem huge. There were only a few moments where I said to myself: “this could have been bigger”. The film is also blessed with great writing, excellent casting, awesome cinematography, and decent CGI that is used more to flesh out the post apocalyptic world more than to hide a modest-sized budget. The musical score by composers Reinhold Heil and Johnny Klimek (PERFUME: THE STORY OF A MURDERER) is eerie and just awesome.

The gore in this film does not disappoint. There are many, many scenes of gut-munching and other grisly mayhem. The zombie makeup has some real zingers too. Of course, my favorite zombie is Number 9 (played by Jennifer Baxter), a young lady in baseball player getup with her face torn open. There’s just something about the plaintive expression on her destroyed visage that just makes me want to hug her. Well, from a distance anyway.

I’ll never forget seeing this movie in theaters. LAND OF THE DEAD is dark, smart, gory (though the director’s cut is where the real action is at), funny, and action-packed. It was just what I needed and I walked out of that theater with a warm heart. The funniest thing that happened while catching LAND with a fairly big audience took place when John Leguizamo’s character says that he is going to go “jihad” on the conniving Kaufman. The mere mention of that word made the audience gasp and I almost burst out laughing. Romero sure knows how to push people’s buttons and shove fistfuls of politics into his screenplays. The United States is still gripped by the constant fear of terrorists and extremists but come on people, there are bigger problems out there. Hello! I’m talking about frickin’ zombies! 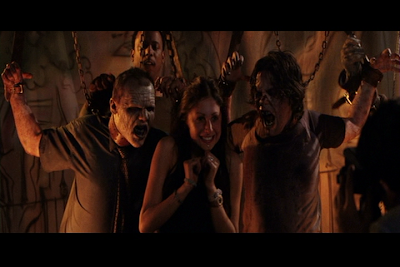