BABY CART IN THE LAND OF DEMONS, also known as CROSSROADS TO HELL, is the 5th installment in the LONE WOLF AND CUB series, which sees exiled Shogunate executioner Ogami Itto and his son Daigoro gradually descending into a bloodsoaked world of violence. Itto can only hope that his quest, which will culminate in the sixth and final installment of the series, will end with him avenging the murder of his wife and killing the person who betrayed him. In this particular film, Ogami Itto battles a group of warriors who were sent by the Kuroda clan to test his skills and make sure he's the real deal. The reasoning behind this is to see if Itto has what it takes to complete a dangerous but rewarding mission that lies ahead. It's like a job interview, but before you can get hired you have to beat your potential boss's ass first. This process of Itto being tested prior to one of his killer-for-hire jobs has been a recurring theme throughout the series, but in this case it's drawn out over much of the film's first act.

There's a lot of information to be processed in this one. The story is a bit confusing, quite frankly, but mostly because of the numerous characters who are introduced, and the sketchy logic behind certain decisions that are made by some of these characters. The story, however, is easy to follow if you just keep in mind the gist of what's going on and not looking too deeply into it: Itto is hired by the Kuroda clan to protect a princess who's being masqueraded as a boy, and in the process finds himself in the middle of a double-cross involving opposing members of the clan. 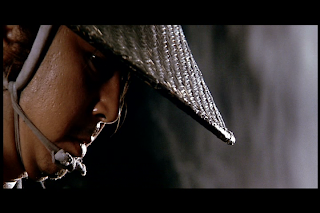 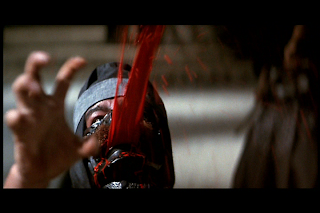 While BABY CART IN THE LAND OF DEMONS isn't as enjoyable as some of its predecessors, it's very solid from a technical standpoint and probably the most beautifully-filmed of the bunch. The Spaghetti Western cinematic influences are present throughout in the form of tight Leone-esque camera shots and certain musical cues. At times, there's also a subtle otherworldly atmosphere, which may or may not be suggestive of Itto and son's further descent into the symbolic "Hell" that keeps getting mentioned. Even the supporting characters in the film are somewhat allegorical in a way: the clansmen of the Kuroda wear demon masks, and the initial five Kuroda representatives that Itto battles in the first act of the film wear veils that feature drawings of the "Beasts of Hell".

That pretty much sums it up. I don't have a whole lot else to say about this film. It's solid and it stands out from the rest of the films in the series because of its mood and complicated story, but at the same time it's not a very noteworthy film, partly due to its lack of "OH SNAP!" moments. Itto taking on numerous Kuroda clansmen in the film's climax was a satisfyingly gruesome highlight.