Back in the mid to late 90's there were a handful of bands that ushered in the Indie Rock scene as we know it today, and paved the way for countless disposable drug-chic hipster bands and singer-songwriters. Two of those bands are the focus of this fascinating and amusing documentary. "Seven years in the making and culled from over 2000 hours of footage", DIG! documents the friendship and eventual feud between Indie Rock darlings, the Brian Jonestown Massacre and the Dandy Warhols.

The story stems from a mutual admiration between both bands, particularly the love-hate relationship between their respective lead singers: Anton Newcombe of Brian Jonestown Massacre and Courtney Taylor of the Dandy Warhols.

"Our bands played together a lot over the next couple of years... and it was rock."
-Courtney Taylor, circa 1996 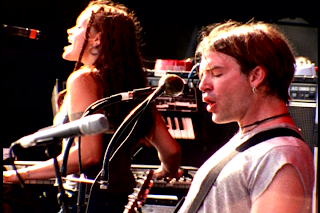 The first ten or so minutes of the documentary tells you everything you need to know about both bands, but most importantly it establishes Anton Newcombe as a very stubborn, delusional, and controlling musician, whose lack of direction and behavioral problems prevented he and his band from achieving the success that many felt they deserved. From then on it's more or less about strapping yourself in and watching the trainwreck that is Anton. Apparently it wasn't uncommon for Anton - a man who, in appearance, resembles a cult leader from the 60's - to stop one of his band's sets dead in its tracks and have some sort of meltdown on stage, either threatening a member of the audience or attacking one of his own band members. 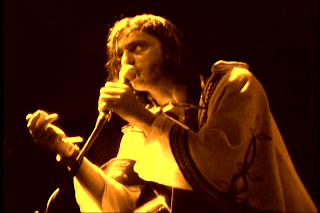 DIG! would have been interesting without the Dandy Warhols, but this is as much their story as it is that of the Brian Jonestown Massacre, and the contrast between the two bands is ultimately what makes the documentary what it is. On more than one occasion, the question is raised (but never blatantly addressed) as to whether Anton was in the wrong for refusing to conform to the standards of the music business, which in turn kept his band from progressing, or whether Courtney Taylor and the Dandy Warhols completely missed the point of the so-called "musical revolution" that kept being brought up in the documentary by signing to a major label and basically selling out. On the other hand, you can look at it as the Brian Jonestown Massacre doing things on their terms and having a sense of artistic integrity. But, as someone put it in the documentary, you need a platform to be heard before you can start a revolution.

Aside from everything I just mentioned, at its core, DIG! is an excellent glimpse into life on the road, as well as the tedious process of trying to get signed and subsequently dealing with record labels, which is something that I personally enjoy when watching rockumentaries. The struggle is so much more fascinating to watch than the aftermath of achieving success, because it's something that a majority of viewers (the common folk) can relate to. Despite my musical tastes being more biased towards a band like Metallica, I find it amusing but also slightly nauseating to sit through a documentary in which a bunch of multi-millionaires deal with their personal issues. To be fair, a good story is a good story, and DIG! certainly brings that to the table.