As most fans of genre cinema are concerned, when the word "ninja" is brought up, two names usually come to mind: Godfrey Ho and Sho Kosugi. Godfrey Ho is an exploitation director who's pretty much the reigning king of Ninjasploitation, and Sho Kosugi is an actor who basically made a career out of starring in ninja movies. While Ho has absolutely nothing to do with this film, REVENGE OF THE NINJA is probably the most well-known of Kosugi's ninja films, and it's also the first in an infamous trilogy of ninja films that were released by the almighty Cannon back in the 80's.

Kosugi plays Cho Osaki - a former ninja who takes his mother and son, Kane (played by Sho Kosugi's real-life son), and moves to America after the rest of his family are ambushed and killed by the most pathetic group of ninjas I have ever seen. While in America, he hooks up with an art dealer, Braden, and the two open up a gallery that sells Japanese dolls. Cho apparently runs a dojo as well, but the only people that we see training there are his young son and a blonde woman named Cathy, who's the kinda-sorta love interest. It's revealed that Braden smuggles heroin inside of the dolls and sells him to his clients behind Cho's back. When a mobster screws Braden on a heroin deal, the unassuming middle-aged white man suddenly assumes the role of an evil ninja (identifiable by his silver demon-mask) and targets the Italians. 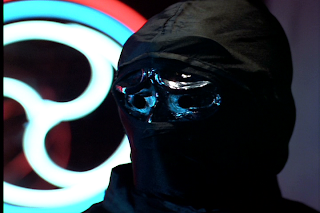 For reasons that needn't necessarily be mentioned, Kane is kidnapped by Braden, and so Cho reluctantly comes out ninja-retirement to battle Braden and reclaim his son, building up to a lengthy rooftop ninja battle with backflips and smoke-bombs galore.

Other than some expositional dialogue in which Cho states that he and Braden trained together at some point, it's never really made clear as to how or why someone with seemingly no martial arts background whatsoever is apparently well-trained in the way of the ninja. Normally I'd be slightly annoyed by something like this, but REVENGE OF THE NINJA is so fucking entertaining that it's quite easy to overlook how much of a required suspension of disbelief there is for this film - and not just in regards to Braden's character, but in regards to pretty much every single aspect of the film. 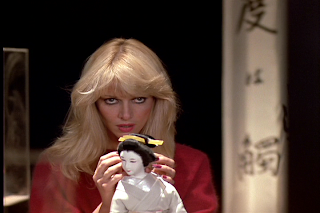 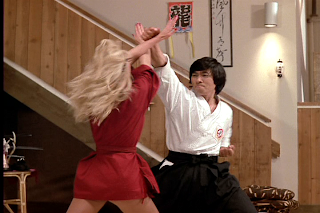 What's amazing about REVENGE OF THE NINJA is that despite how absolutely ridiculous it is, I'm convinced that the people behind the film took it completely seriously while making it. I'm sure anyone who makes a film obviously takes it seriously to a certain extent (unless you're the moron who made BIRDEMIC), but, for example, this film features some of the most over-the-top bad guys, thugs, and henchmen I've ever seen in my life, but they're portrayed without much irony or humor. It's like someone legitimately thought it would be a good idea to have a stereotypical pig-tailed Native American in moccasins working as a henchman for the mob, and that's one of the reasons I'm head over heels in love with this movie. 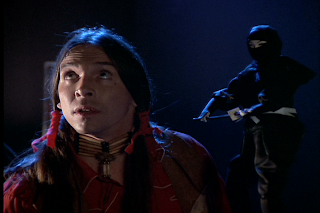 On a serious note, this movie delivers everything you would expect from it, and then some. It wastes no time getting right down to the ninja action instead of teasing you and saving all the good shit for the end. Like another Cannon film I reviewed recently, INVASION U.S.A., this one is pretty much non-stop ridiculousness from start to finish. In the action department, the highlight for me was a fight scene that takes place in the back of a moving van and involves a nasty-looking stunt in which someone is thrown from the back of the van as it's being driven. I'd honestly be shocked to find out that the stuntman who took the aforementioned bump out of the van didn't crack his skull open. Another highlight of the film is a fight scene that takes place in a playground, involving Cho, a Karate-fighting cop, and the most unlikely group of allies: a black man in rollerskates, an effeminate cowboy, a Polynesian biker, and some guy who looks like the love child of Zangief and E. Honda from the Street Fighter video game. Speaking of which, pretty much every villain in this movie looks like a second-rate Street Fighter mini-boss. 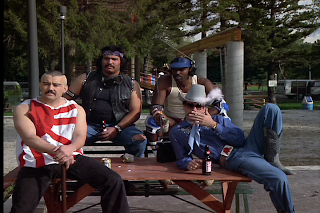 I could go on and on about how awesome this movie is. I didn't even mention the fight scene involving Braden and Cho's mom! Or, the fact that Ashley Ferrare, who played Cathy and only made one other film the following year before disappearing from the face of the Earth, is unintentionally hilarious anytime she's on screen and is worth the price of admission alone. REVENGE OF THE NINJA is also an educational film. Did you know that a ninja star to someone's eye can automatically kill them? Did you know that a ninja isn't above killing you in a public restroom in broad daylight? Did you know that it's apparently OK for Asians to refer to themselves as "Orientals"? I'm literally a smarter man now that I've seen this movie. Thanks, REVENGE OF THE NINJA.