DEADBEAT AT DAWN is a gritty independent cult film that follows a former gang leader (played by director Jim VanBebber) as he attempts to distance himself from the violent world he's immersed himself in, but is drawn back to the streets due to tragic circumstances, nunchucks a-swingin'. 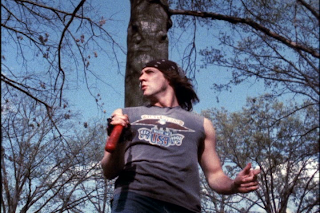 Goose is the leader of a street gang known as the Ravens. The attempted rape of his main squeeze, Christy, early in the film leads to a showdown in a cemetery as members of both the Ravens and their rivals, the Spiders, look on while their respective leaders engage in a knife fight, which ultimately sees Goose coming out on top. As Goose stands victorious over his foe, he exclaims "Fuck your noise!" For some reason, both Goose and the leader of the Spider's, Danny, show up to the cemetery wearing masks (the former in a Lone Ranger mask and the latter in a weird-looking Batman mask), but they quickly remove them right before the shit goes down. Not sure what the point behind the masks was, but it's one of the things that makes this film so amazing - the WTF factor and the notion that VanBebber and crew attempted to use anything (and everything) they could for the film, be it props, costumes, etc. 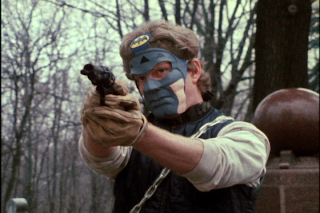 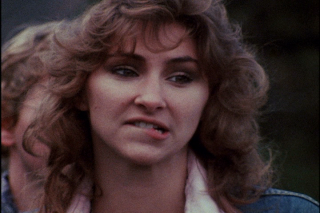 Christy (who dabbles in black magic and plays with Ouija boards, by the way) has apparently grown tired of Goose's gang lifestyle, but you wouldn't be able to tell it considering how orgasmic she looked while watching her man kicking Danny's ass in the cemetery. Anyway, she begs Goose to quite the gang, but he ain't havin' it. "I gotta find out what the word on the street is", he says before turning his back on Christy and slamming the door behind him. I guess by "finding out what the word on the street is" he meant knife-throwing and nunchuck practice in the cemetery, because that's exactly what he does in a training montage of sorts, which even includes Goose practicing his signature roundhouse kicks on tree branches. Goose then hops over the cemetery fence, cracks some random guy over the head with his nunchucks, steals his motorcycle, picks up Christy, quits the gang, and they all live happily ever after.

Well, that last part was a lie.

Looking to get some payback for his cemetery ass-whooping, Danny sends two of his henchmen, Bone Crusher and Stubby, over to Goose's apartment to pay him a visit. Goose just so happens to be out selling drugs, so they break into the apartment and beat Christy to death before disemboweling her. Goose later returns and is obviously distraught, so he throws her body in a trash compactor and ultimately descends into a world of booze and depression. The film then basically focuses on Goose as he's pulled out of the gutter by a member of his old gang, and it builds to an inevitable showdown between Goose and the dastardly Danny. 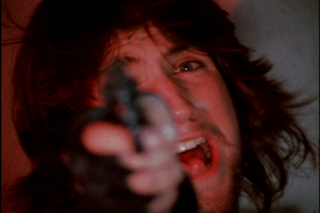 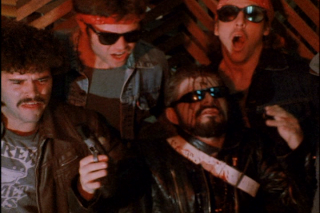 I know I just pretty broke down most of the movie for you, but DEADBEAT AT DAWN is all about the journey that its lead character is on, and I feel the only way I can do this movie justice is by giving you a better idea of Goose's journey and talk about all of the insane shit that happens in the meantime. This is an extremely low budget film, and it's comparable to something that would be produced by student filmmakers with big aspirations, big ideas, and no resources. But yet, despite its flaws, DEADBEAT AT DAWN has more heart than films with a thousand times its budget, and I'd easily put it up there with the first EVIL DEAD (amongst other films that I can't think of right now) as essential examples of DIY cinema. Aside from some background actors who ham it up and really downplay what could have been a solid attempt at a bare-bones exploitation/action movie, as well as some overall pacing issues, DEADBEAT AT DAWN is about as close as a movie of this type can get to being a bloodsoaked indie masterpiece.