Lee Van Cleef plays a loner named Sabata, who drifts into the small town of Daugherty just in time to help recover a safe containing 100,000 dollars that was stolen from the Army. The thieves were a group of traveling circus acrobats, but it's soon revealed that they were merely pawns for the real thieves, and that the robbery was orchestrated by the town's corrupt officials, including a judge and an effeminate guy with a combover, whose position wasn't made clear at any point (I figured he was a land baron, but who knows). In order to wrong the rights, Sabata teams up with a mysterious banjo player, an alcoholic with impeccable knife-throwing abilities, and a mute acrobat. 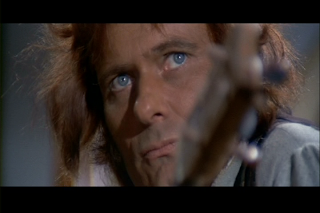 Back in the day, one of the trends with the Spaghetti Western genre that a mysterious anti-hero would be introduced in a film, and in turn it would result in a number of cash-ins that claimed to be sequels of said film, which, if you think about it, is true exploitation filmmaking, especially when you consider the fact that some of these films had absolutely nothing to do with the movies they were claiming to be sequels of. The main example would be DJANGO, which spawned about 50 unofficial sequels, give or take (maybe more), and another lesser example would be SARTANA, which didn't reach the heights oF DJANGO in terms of acquiring false sequels, but it still had over a dozen films attached to it. SABATA is the first film in a trilogy and it's directed by the same guy who did the first SARTANA movie (Gianfranco Parolini, who directed the rest of the SABATA trilogy). While the Sabata character did pop up in a few more films, there were only two others that were considered official, with Lee Van Cleef only returning for one of them. The actual characters of Sabata and Sartana are similar in certain ways: both dress in black, both have an air of mystery to them, and both are driven by justice to do what they do rather than greed or vengeance. 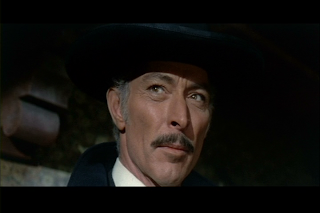 It's no secret that Westerns (Spaghetti and otherwise) were influenced by the samurai films of Japan (and vise versa when the samurai films of the 70's drew influence from the Leone Westerns), and I don't know if it's because I've seen more samurai films since the last time I watched a Spaghetti Western, but it really shows in this particular movie. The heist scene at the beginning of the film is very similar to pretty much any scene from a samurai film involving ninjas, and Sabata himself is almost like a rōnin of the wild west, which, to be fair, can be said for most of these Spaghetti Western anti-heroes. Another similarity would be the theme of corruption, although there's not as much of an emphasis on it in this movie as there was in the samurai films that I've seen. 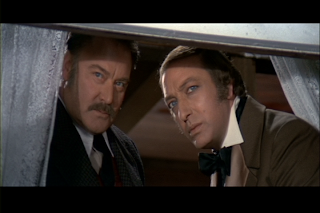 You all know I'm a horror guy, but I like to think I've seen enough Spaghetti Westerns to at least have a scale to fairly rate them on. SABATA has its moments, and I understand its main selling point was Lee Van Cleef, who was a big tough-guy star back in the day, but as a whole I feel it pales in comparison to a lot of the Westerns I've seen. Among the highlights in this movie, for me, were the unconventional weaponry (a convention of Spaghetti Westerns that I always get a kick out of), and the fact that the lead character sympathizes with the misfits and eventually aligns himself with them to take on the villains. Speaking of which, the banjo-playing character (named "Banjo", conveniently enough) was a one-man Greek chorus of sorts, which I thought was pretty cool. Also, I thought the music in the film was great. Good musical scores and Spaghetti Westerns usually go hand in hand, but this film's score in particular partly consisted of pipe organs, which is an instrument that I personally don't ever hear used in Westerns very often, if ever. During the heist scene at the beginning of the movie, the background music sounded like the theme from Fulci's HOUSE BY THE CEMETERY. I kid you not, man.

In the end, SABATA had a lot of the elements that I love about Spaghetti Westerns, including the feel-good twist ending, but it didn't compare to some of the better Spaghetti Westerns I've seen (some of which also star Lee Van Cleef). The villains in particular were a huge disappointment, as I felt they never really posed a significant threat to the titular character, let alone the team of Sabata and his group of misfits. I still like it quite a bit, but I probably won't go out of my way to see it again.