It's Chuck Norris versus Richard Lynch in what is easily one of the most insane action movies I've ever seen. Directed by Joseph Zito (FRIDAY THE 13TH: THE FINAL CHAPTER!) INVASION U.S.A. epitomizes, to me, what the "hairy macho bullshit" is all about, and, in my opinion, it epitomizes over the top 80's action. Bold statement, but this movie is absolutely relentless from start to finish, displaying one utterly ridiculous action set-piece after another. Exposition? Character development? You get both of those, but you get them as people are being blown to smithereens by bazookas and shot to shit by uzis. I'm sure a lot of you reading this have already seen this movie, but to those who haven't: trust me when I say that this movie does not fuck around. 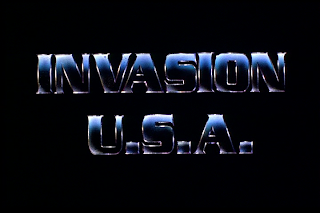 Richard Lynch plays a Russian named Rostov, who leads an ethnically-diverse group of terrorists, seemingly from varying parts of the world. It's like they're the United Nations of terrorists and Richard Lynch is their commander in chief. Of all places, they decide to invade the Florida keys Normandy-style. From then on, it's an all-out relentless attack on anyone and everyone as Rostov oversees the pandemonium, but they hit a bearded, tight-jeaned roadblock in the form of Matt Hunter (Chuck Norris) - a former special agent who comes out of retirement to stop the terrorist attacks. It's revealed that Hunter and Rostov have a history together, which isn't really worth talking about, but it's just one of those things that comes into play as the story unfolds and adds a "personal" element to the feud between Norris and Lynch's characters. 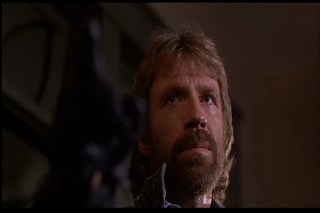 One of the areas where INVASION U.S.A. succeeds is its pacing. As I alluded to earlier, this movie is pretty much non-stop action from start to finish, with a few brief pauses to develop the plot and establish characters, but mostly to set up the next ludicrous set-piece. The movie opens with a boat full of Cuban immigrants being blown to pieces by machine guns, and the film literally ends with a shot of Chuck Norris mere seconds after he kills someone before the smoke has even settled. In the meantime, we get shootouts in shopping malls full of people and a white upper middle-class neighborhood being blown up by a bazooka as families are decorating Christmas trees! I mean, seriously, did Neveldine and Taylor somehow travel back in time and make this? 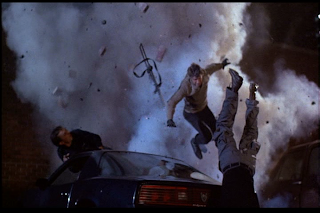 They say every good hero needs a villain. Luckily for Chuck Norris, Richard Lynch plays one nasty son of a bitch in this. Old people? Women? Children? People seeking shelter from terrorist attacks in a church? No one's safe in this movie, be it from Rostov himself or the hundreds of terrorists who follow his command, and I love that. I don't remember where, but I heard someone say recently that true evil is measured not by what someone possesses, but by what someone lacks; to be evil is to be completely oblivious to morals, and I don't mean being aware of morals and disregarding them, but rather to be delusional and believe that what you're doing is right. Keeping that in mind makes me looks at villains in a new perspective and be much more aware of the psychology behind the characters. That being said, Rostov (who's played wonderfully by Lynch) is undeniably evil, for reasons that are obvious when you watch the film. He also has these strange quirks, like shooting people in the dick. Not once, but twice, Rostov sticks his gun down someone's pants and pulls the trigger - repeatedly. My favorite Rostov kill in the film is when he throws a woman out of a window. He had a gun, mind you, and could have easily shot her and been done with it, but no. He makes the conscious decision to grab a certain female character and throw her out of a fucking window. Amazing.

While I'm on the subject of the film's characters, there's this female photographer who keeps popping up in the film, either trying to snap photos in the midst of shootouts or tagging along with Chuck Norris (who she always refers to as "Cowboy"). For some reason, they decided to make this female character one of the most obnoxious non-villains to ever grace the screen, and I'm not exaggerating when I say that. This chick literally has no purpose in the film, and every time you see her she's being a total bitch. "Why is she so goddamn mean?", I wrote down in my notes as I watched the film. Chuck Norris saves her life at one point, and she responds by throwing a trash can lid at him and calling him a "creep". Really? And the strange thing about this? She has no character arc whatsoever. She's a cunt the entire time. Oh, how I wish she would have gotten tagged by a stray bullet.

And speaking of stupid characters, it's like all of the civilian characters in the film had no concept of danger. You'd think that a shootout in a public place would be a cue for everyone to leave, but in one case a truck (that just drove through a shopping mall and came screeching out into the parking lot after crashing though glass doors, mind you) obviously being driven by a terrorist hits someone's car, so the car's owner (a woman) tries to confront the terrorist and ends up being dragged down the freeway by her fucking hair - during a high-speed chase! 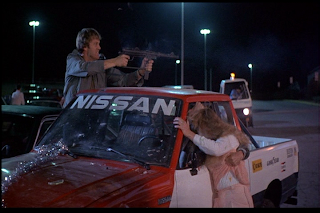 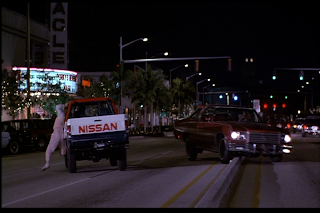 I could seriously go on and on about how insane this movie is, but hopefully I've painted enough of a picture for all of you who haven't seen this movie to kinda get the idea. Chuck Norris is as uncharismatic as usual, but who cares. As expected, he's an unstoppable killing machine who comes out of everything unscathed. Billy Drago appears very briefly, but I'd be remiss not to mention him. For the short amount of time he's on screen, Drago sleazes up the fucking joint. In my opinion, though, Richard Lynch as Rostov was the standout, which is why he gets the main screenshot treatment in this review as opposed to Norris. If I were to rate this movie based on how crazy it is, I'd easily give it a 9/10, but seeing as I have tendency to be very critical, I gotta calls it like I sees it. Yes, INVASION U.S.A. is incredibly violent, it's paced well, and Richard Lynch is great in it, but that's about it. Plot, script, score - nothing exceptional. Style and originality? Non-existent. It's a very bare-bones, to-the-point film. Still, though, I can't recommend this movie highly enough. I may as well just quit reviewing films for the rest of the month now that I've seen this.