THE STRANGER WITHIN is a Psychological Thriller with Horror elements, and it revolves around an actress named Emily who goes through a very traumatic experience that subsequently affects her mental state in a major way.

The film pretty much opens with the aforementioned traumatic experience, which involves a casket and someone with a sack over his head. Once that's over with, the film cuts to six months later. Emily and her husband Robert are traveling to Spain for some rest and relaxation. Aside from establishing what happened to Emily right off the bat, the film throws a lot at the viewer in the first twenty minutes or so, and by that I mean some intense moments and a surprising amount of horror imagery. If there's one thing this movie does a good job of, it's setting everything up and planting the seeds for what's to come. That said, once the initial set-up was over, I knew THE STRANGER WITHIN would go one of two directions: it would all pay-off in an interesting way, or it would completely shit the bed. 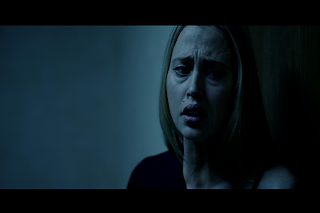 The horror imagery was surprising at first considering THE STRANGER WITHIN seemed like one of those "Blank from Hell" movies on the surface. In the end, that's essentially what it is, but Emily's descent into madness adds an "unreliable narrator" element to the proceedings. Speaking of Blank from Hell, once Emily and her husband are in Spain, a young woman named Sarah comes into the picture. Sarah is taken in by the couple on a stormy night after she claims her boyfriend died in a hiking accident. Before you know it, she's making herself comfortable, asking Emily inappropriate questions, and taking her clothes off. 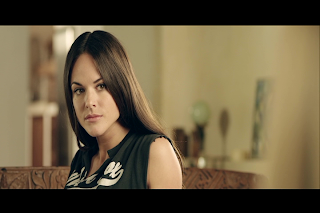 The only reason I decided to check this movie out is because I'm the world's biggest William Baldwin fan. OK, that's a lie. I sought this movie out because Sarah Butler is in it. I've had a crush on her ever since FLU BIRDS, yo. If any of you know her from anything, it would probably be the remake of I SPIT ON YOUR GRAVE, in which she assumed the role that Camille Keaton portrayed in the 1978 version. I wouldn't go so far as to call Sarah Butler one of the most promising young actresses working today, but there's no denying that she's fucking adorable. Sarah, if you're reading this: I love you. Also, sorry for the bad review that I'm about to give your movie. Don't let it get to you. I have no credentials, so this review doesn't mean much anyway. I still love you though. Please RT! 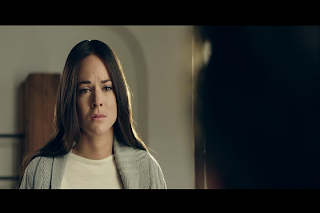 One thing of note is that the music is reminiscent of Pino Donaggio, which is either good or bad depending on your tastes. Speaking of which, the film seems like it would've been ripe for someone like Brian De Palma to direct it, but, judging by the reviews of his most recent film, perhaps it's best that he didn't. Another thing worth mentioning is the random appearance by Kim Bodnia, who played Frank in Nicolas Winding Refn's PUSHER. I can't really talk about Bodnia's character in the film, but let's just say that I didn't know he was in it until I saw his name on the end credits. I assume he was cast in the movie since it's a Danish production, but... yeah. 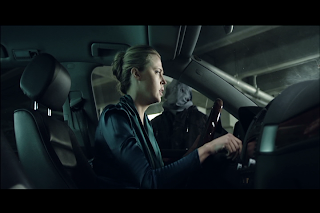 Unfortunately, STRANGER WITHIN proved my suspicions right. Without getting into details, it turns into a complete mess by the end. The film really goes out of its way to grab your attention at first, and, in my case, it worked. Like I said, great set-up, but the ultimate pay-off left a lot to be desired - not to mention a lot of open plot holes. The climax of the film is brutal - not in terms of violence or visuals, but the way in which it plays out is almost embarrassing to watch. And by that I mean I was embarrassed for the poeple in it. STRANGER WITHIN sets itself up for a variety of different outcomes and opts for a predictable one. In the end, this is a beautifully-shot but fairly cliche and talky Thriller with acting that ranges from bad to lazy. Overall, not awful but extremely disappointing. Sarah Butler made it watchable for me, and I'd sit through it again just for her. Gosh, I hope I don't sound like a creep right about now. *blows out the candles on my Sarah Butler shrine*