In a not-too-distant post-apocalyptic future, millions of people die as a result of a sudden epidemic of organ failures. A megacorporation called GeneCo capitalizes in this by financing organs to anyone who's desperate enough. The catch - as with anything that's financed - is that if one fails to make payments on their organs, GeneCo sends a Repo Man to collect what's rightfully theirs, as in someone will find them and remove the borrowed organs right from their body. REPO! THE GENETIC OPERA tells a story of a group of characters who are intertwined through this bizarre organ-financing premise, and it's done so in the style of a rock opera. 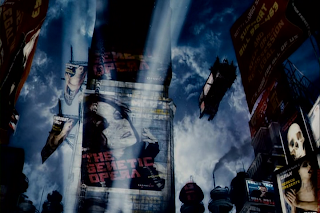 Rotti Largo is the head of GeneCo who, ironically, is diagnosed early in the film with a terminal illness, and so his children subsequently fight over who will inherit the company once he passes away, but, considering this is a rock opera, they do so while singing. Whoever cast the film brought together an interesting group of people to play Rotti's children. Playing the ill-tempered Luigi (and presumably the eldest Largo) is Bill Moseley. Paris Hilton plays Rotti's only daughter, the bratty surgery-addicted Amber Sweet. Rounding out the Largo clan is Pavi, played by Ogre from Skinny Puppy of all fucking people. Pavi has sort of an Ed Gein/Leatherface gimmick in that he essentially obtains other peoples' faces and wears them as masks.

Aside from the internal battles of the Largo family, we have a single father named Nathan, who secretly works as GeneCo's head Repo Man while caring for his sick teenage daughter, Shilo. Apparently Shilo inherited a disease from her late mother, or at least a weak immune system that would make her more vulnerable to illness. Because of this, she resents her mother, but at the same time she sort of feels a connection to her dead mom that she doesn't have with her father. Yeah, I dunno. For reasons that are obvious when you watch the film, Shilo is an unappreciative little shit who rebels against her father for seemingly no reason other than it being in her nature as a frustrated teenager to do so. Another main character in the film is the Graverobber, played by Terrance Zdunich - one of the creators and writers behind the original REPO! stage show. The Graverobber is basically a one-man Greek Chorus who doesn't really play a part in the overall plot but occasionally pops up in random scenes. He's also a pusher of an illegal painkiller known as Zydrate, which Paris Hilton's character is addicted to. 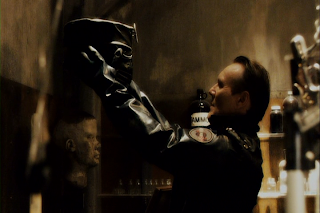 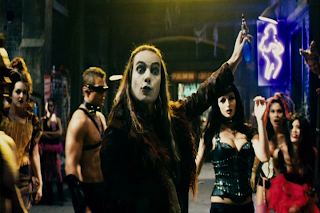 Basically, things take a turn when Nathan finds out that there may be more to his late wife's death than he originally thought. There's some sort of conspiracy, a cover-up, and a bit of irony thrown in. The music featured in the film isn't as industrial-sounding as you might think, but there's a common electronic vibe amongst most of the songs. The songs are fine for the most part, but the execution by some of the actors is almost cringe-inducing. Bill Moseley in particular, who's an entertainer that I admire for his roles in some of my favorite horror movies, is almost painful to watch at times. Same goes for Alexa Vega as Shilo, but mostly because of the atrocious songs that she's given to work with, although her song at the very end of the film is decent. Strangely, my favorite person in this movie is the only person who I was apprehensive about going into it: Paris Hilton. Paris fits her character perfectly and she's one of the few people in the film who didn't look out of place. She did, however, win a Razzie for Worst Supporting Actress for her role in this, so what do I know. 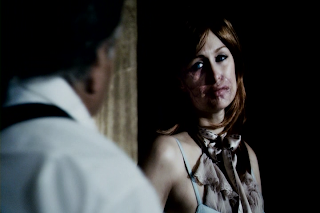 REPO! has an interesting history, in that it started as a stage show and was eventually developed into a film as a passion project of sorts for its creators, Zdunich and Darren Smith. Unfortunately for them and everyone else involved, the film's distributor, Lionsgate, wasn't all that crazy about it; REPO! was given a very limited release on a little more than a handful of screens and barely promoted. So the filmmakers took it upon themselves to promote the shit out of the movie and take it on the road, screening the film in various cities to audiences of weird Goth kids and steampunkers. Whether you like the movie or not, you have to admire the promotion of the film, which partly consisted of mock propaganda posters and a heavy emphasis on the promotion of the individual characters. If I remember correctly, director Darren Lynn Bousman and others were a bit confused as to why Lionsgate were basically holding them back, but I think the product speaks for itself. 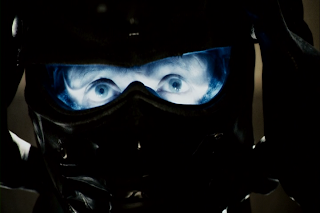 One thing I will always give the movie credit for, without hesitation, is how great the visuals are. The Repo Man in particular was designed really well and given a look that was seemingly destined to make the character iconic, and most of the other characters in the film, visually-speaking, are interesting as well. The overall aesthetic and the universe created by the minds behind REPO! is also pretty cool.

The thing with REPO! is that I don't really have any place in saying if it's good or bad. What I do know is that I don't particularly care for it, but I'm sure the film's cult following would disagree. I know this film appeals to a certain audience, but I'm not one of those people. Speaking of which, what really bothered me about the film when it first came out is how the filmmakers tried to put it out there as a pre-packaged cult movie. Just on principle - and the same goes for any other filmmaker who tries to prematurely claim that they have a cult movie on their hands - I tend to automatically find a reason to dislike movies that claim to be instant cult classics. "Cult" status should be something that's earned, not claimed. Luckily for the people involved with REPO!, it did become a cult movie of sorts, but whether it stands the test of time and is seen as relevant many years from now remains to be seen. I highly doubt it.