In an unspecified year in a post-apocalyptic future (considering this was made in the 80s, I'd say 2010), a plague has wiped out most of humanity along the east coast of the United States, reducing once thriving civilizations to communities of survivors who live in fear of their surroundings thanks to a group of "Pirates" who rule the wastelands and bask in the anarchy and destruction. Oh, and people are named after guitars. Marshall Strat for example. Or the growling blue-eyed leader of the bad guys, Fender Tremolo, who leads his fellow Pirates around the wastelands to terrorize people. 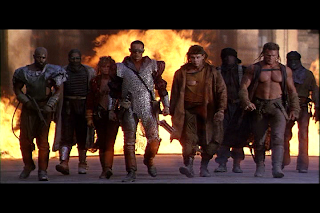 Shit kicks off when our hero, an ass-kicking drifter named Gibson Rickenbacker (Van Damme), meets a she-borg, Pearl Prophet, who needs to get to Atlanta to retrieve a cure for the plague. She-borg wants his protection, but Gibson doesn't really care about the betterment of humanity. After his family was killed years ago (as established through a series of flashbacks that last for pretty much the duration of the entire movie), he hasn't really given a shit about much in general. Before he can make a choice, the she-borg is intercepted by the bad guys, who decide to take Pearl to Atlanta themselves so they can steal the cure and most likely destroy it. Either way, if she-borg refuses, she-borg will get "the horror show". Gibson then decides to rescue Pearl, but he does it for selfish reasons considering Fender is the person responsible for killing his family years ago. An adorable chick with big knockers tags along, and fight scenes with bad guys who look like leftover villains from the ROAD WARRIOR set ensue. 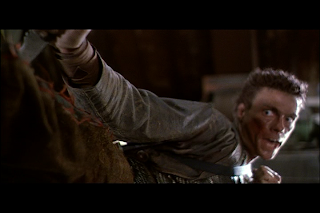 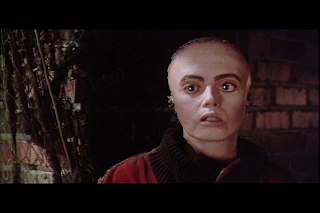 My write-up of CYBORG has been snarky thus far, but I'm only doing it out of love. And let's face it, when your character's names are Gibson Rickenbacker and Marshall Strat, you're asking for it. This is a movie with problems, but I adore pretty much every second of it. Truth be told, I've never been a huge fan of Van Damme. I've enjoyed some of his movies as much as anyone else who grew up in the era of the Action Star, but he's never been someone whose movies I just had to see as soon as they came out. I find him to be a much more interesting star now that he's older. I guess he always just came across like a douche to me back in the day when he was in his prime. That being said, I wouldn't say he's great in this, but he has his moments and is given plenty of opportunities to show off his fighting abilities in the film's many battle sequences. He's also a lot better than the original actor they had in mind; I couldn't even imagine this film with him in it. One of the reasons that I like Van Damme in this is that he doesn't talk much. In fact, most of the actors don't talk much. There's not a lot of dialogue in this movie, and I love the minimalist approach that they took with the storytelling here. Another thing I can't imagine this movie having is stupid one-liners. 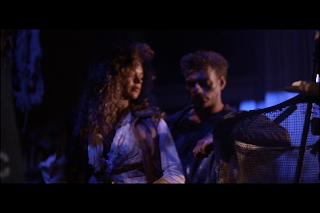 A lot of things factor in to why I like CYBORG so much. From the good if, at times, overwhelming synth score (which director Albert Pyun never approved, but I'll get to that) to the surprisingly great cinematography to the awesome production value of some of the locations that the filmmakers scored. The main reason I love the film, though, would be the bad guys as a whole. The "Pirates". The MAD MAX rejects. But, before I get to that, the visuals and the overall style are worth talking about. The fight scenes and action sequences are shot and edited pretty well, despite the excessive amount of slow-motion (which I personally didn't mind). As far as the cinematography, we get some gelled lighting in spots, which adds a dreamlike quality to the visuals, and, coincidentally, CYBORG is also shot like an Australian genre film, in that it's hyperstylized at times and there's an undeniable fetishization of the action and especially the bad guys themselves. I guess CYBORG is proof that, if you're gonna cash in on something, there's nothing wrong with doing it well. 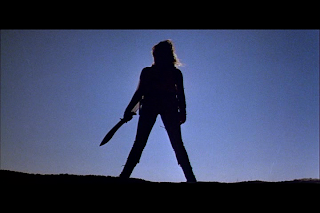 So yeah, the bad guys. I love the squad of thugs and post-apocalyptic warriors that Fender is surrounded by at all times. As disposable as they are, they all have their own unique looks, which gives them a sense of identity. It's almost like the bad guys were designed with an action figure mentality in the same way that toy companies produced characters for old-school cartoons like GI JOE and the like. Even if their roles are insignificant at the end of the day, there's an appeal to them. Besides all of that, they just look cool, although the practicality of some of their masks and outfits are questionable. My only complaint about the villains is that some of them go out like a bitch, but I wonder how much of that has to do with what was cut from Albert Pyun's intended version of the film in order to avoid an X-rating. Apparently Pyun's version contained a lot more violence, told a different story, and had a different musical score, but I've never seen it.

Not a lot happens in CYBORG. As I said earlier, it's a fairly minimalist film in terms of the story. Van Damme spends most of the movie with his female companion, Nady, roaming the wastelands and encountering bad guys in between flashback scenes of Gibson's past life, back when he had a family and appaently had a fondness for bad wigs. Nady talks a lot and he doesn't. Despite not having much of a story, CYBORG is paced pretty well. There's a huge pay-off in the second act that basically resets Van Damme's character and still leaves room for a big finale and an inevitable showdown with Fender. The downside of the pacing is that the abundance of fight sequences sort of waters down the emotional element of Gibson's motivations, in that the boss battle doesn't mean as much despite how much it's set up and teased throughout the film. Also, the fight choreography isn't anything to get excited about. The bad guys basically feed themselves to Van Damme just so he can throw one of his trademark kicks or do some generic-looking counter move. None of that really matters in the end, though, because CYBORG hits the sweet spot for me in so many ways.