Pat Quid is an American truck driver who happens to be working in Australia for whatever reason, and he's a bored truck driver at that - so bored that he usually talks to himself or his pet dingo and comes up with nicknames for other motorists as he's out on the desolate roads of rural Australia. In fact, the title of the film is a reference to the games that he plays while driving to keep himself entertained. So you can imagine someone as bored as him typically being observant, and such is the case when he realizes he's constantly running across another motorist (Grant Page) who drives a green van and behaves rather suspiciously. This coincides with news reports of a serial killer on the loose and the severed limbs of this person's victims being found in various locations. Quid becomes progressively paranoid as the film goes on, and he decides to finally pursue the mysterious motorist, who he dubs "Smith or Jones", when a female hitch-hiker that he befriends (Jamie Lee Curtis) is abducted. 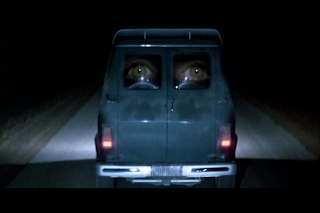 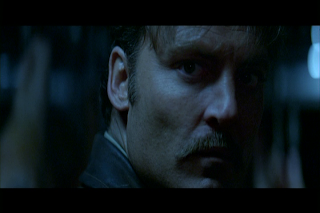 Aside from being set on the open road for the most part, ROAD GAMES also addresses what it's like to be driving on a desolate road for long periods of time. A driver, quite often, will find themselves sharing the road with the same motorists in a recurring manner, as in they'll lose one another and eventually find each other once again at a completely different location, which is the case when you're on a road that only goes in one direction or the other and doesn't really lead to anywhere of note. An unintentional convoy, basically. Another thing that the film addresses is what it's like to be fatigued while driving. Quid in particular is affected at a certain point by a combination of the repetitious nature of driving and a lack of sleep, which could potentially cause one to hallucinate. I've personally experienced these types of hallucinations in the past while driving, sometimes seeing people on the side of the road who weren't there and animals darting across the road that don't exist.

Based on what I've seen by the late Richard Franklin (which would only be this and PATRICK), he's similar to Brian De Palma in that he's not shy about the fact that he's a Hitchcock buff - this definitely comes through in ROAD GAMES, be it with the narrative or the ambitious camera work. Despite having some minor issues with the film, I'd be lying if I said the camera work and cinematography in ROAD GAMES wasn't impressive. Franklin doesn't really allow the film to go overboard with the Hitchcockean camera angles and techniques, but they do show up on occasion and are consistently impressive. One of my favorite shots in the film is one that starts on the back of the van that Grant Page is driving as its on the road, only to pan to the drivers side, around the back of the van, and into a close-up of Grant as he stares at the camera through the side mirror. 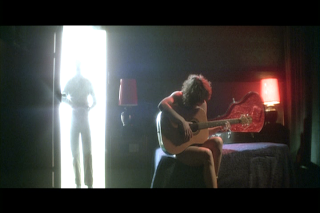 There was a bit of controversy when this film was made amongst the local Australians in regards to the casting of Jamie Lee Curtis, which, according to Richard Franklin, was the result of studio intervention. The character of Quid was meant to be an outsider to the country and was actually intended for Sean Connery, but Stacy Keach was ultimately cast in the film because of Connery's hefty price tag (more than the entire budget of the film, supposedly). The local Union took issue with the casting of Curtis, however, because they felt a local actress could have been cast in the role. True, since there's no mention of her character being a foreigner in the film - not that I can recall anyway. Regardless, Curtis got a nice working vacation out of the deal, playing a hitch-hiker that Keach's character passes twice before eventually picking up. As far as Keach, he's pretty good at playing a clumsy hero of sorts, and he's given some great dialogue and one-liners as well. 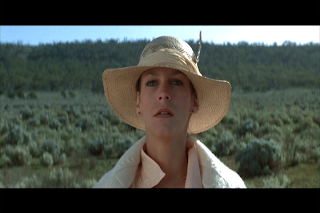 Considering Richard Franklin was working on a limited budget, I wouldn't be surprised if the casting of Grant Page as "Smith or Jones" was a way of saving money since he was already hired to work on the film as the Stunt Coordinator, but who knows. Whatever the case, it's always great to see Page in front of the camera. Another familiar face who turns up is Robert Thompson as a motorcyclist who Quid refers to as "Sneazy Rider". Thompson, for those unfamiliar with the name, made his on-screen debut in Richard Franklin's PATRICK a few years earlier as "Patrick" himself. 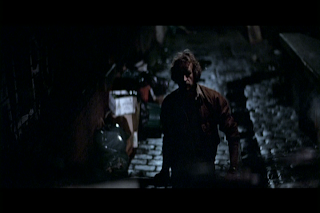 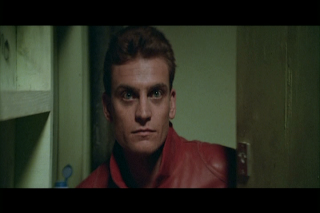 ROAD GAMES takes a long time to get going, and even when it does, it doesn't really go anywhere, which is ironic since this is a film in which its characters are always on the go. Richard Franklin took the idea of "suspense" literally with this film, building and building to a conclusion that may seem a little too abrupt to some. According to Franklin, he had a couple of big set-pieces in mind for the ending of the film but was unable to shoot them due to time constraints, and the film's epilogue was supposedly shot at the request of the studio after the rest of the movie was edited. Aside from seeming somewhat rushed, the climax was also disappointing because of my own expectations. You see, I smelled a huge twist about an hour or so into the film, and I thought "If they actually go in the direction I think it's going, this will be one of my favorite Australian genre movies ever." Well, that twist never came, and I felt that maybe Franklin missed an opportunity to blow peoples' minds, but because this was entirely my fault for expecting something that wasn't promised, I couldn't hold it against the film. Overall, the film does meander more often than not, but it's a decent thriller and beautifully-shot.