Headed to nowhere in particular, lead character Charlotte is a tattooed tough-gal on a road trip by herself. After being harassed by a group of bikers, she picks up a handsome hitch-hiker and the two of them end up at a diner ran by a seemingly harmless old woman. When the hitch-hiker goes to the bathroom and doesn't return, Charlotte, for whatever reason, decides to hang out at the truck stop well into the night and wait for him to resurface. Big mistake, as Charlotte later finds herself caged like an animal at the hands of the diner owner and prepped as the main course for a mass feeding of ghouls who emerge from the earth at night. 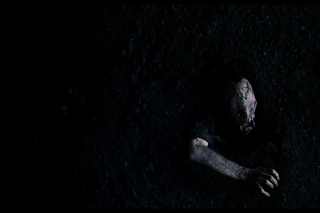 I don't know whether this was done on purpose, but Charlotte blatantly does pretty much everything you're NOT supposed to do in a horror movie. Because of how quirky the film has a tendency to be at times and how there are moments of dark comedy inserted into the horror, it could be that THE PACK is sort of a tongue-in-cheek take on the backwoods cannibal film with a NIGHT OF THE LIVING DEAD "zombie"/siege twist. If that's indeed the case, then the character of Charlotte is a good balance of the strong Final Girl and the cliched and much-parodied horror movie damsel in distress. If the intention was for this film to be more serious than not, then she's clearly a dumb broad who gets exactly what she deserves. Whatever the case, her actions are really contrived, and it's one of those things where a series of events (and mistakes) has to happen in order for the story to unfold the way that it does; this could potentially be frustrating to the more seasoned horror fan, but they should be used to it by now. 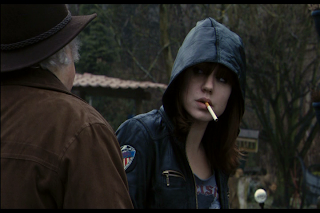 While actress Émilie Dequenne is good, I had some issue with her character, in that she's really hard to feel sorry for her considering how she's established. Yeah, I get that she's supposed to be a tough, independent chick, but she's also quite rude and, well... dumb. Going back to what I said earlier about Charlotte making a lot of mistakes, this also ties into how I was pretty much unable to invest in her. On the other hand, the character of La Spack (the crazy old woman who owns the diner and prepares human meals for her ghouls) isn't really that strong enough of an antagonist to make you wanna pull for Charlotte by default. It is what it is, but it's one of the many elements of the film that adds to how much of a missed opportunity it is. 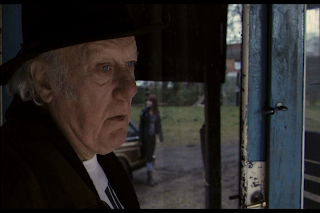 Speaking of missed opportunities, there's a cool info-dump and explanation in regards to the ghouls that really should have been explored further since it's one of the more interesting things that the film has to offer, but unfortunately it's just kind of there. In fact, it's the introduction of the ghouls that truly save THE PACK from being just another tired backwoods cannibal torture-porn type of movie. On the plus side, the atmosphere and overall look of the film is great. It has somewhat of an old-school drive-in type of feel to it, and the retro synth score that pops up on a few occasions is a nice touch. THE PACK is kind of a cool horror mash-up in a way, but it doesn't really have any strong enough pay-offs to make it anything more than forgettable. Even Philippe Nahon (HIGH TENSION) is wasted in this. I wouldn't outright discourage anyone from seeing this since it's a perfectly serviceable horror film and it's only about eighty-minutes long, but it's not something anyone should put high on their list of priorities.