THE NIGHT EVELYN CAME OUT OF THE GRAVE (which, from this point forward, I'll just refer to as EVELYN for short) is a Giallo that I've been meaning to see for quite a while now, ever since I kinda got into the genre and started delving into it outside of the films of the more familiar directors associated with the genre, like Argento and Bava. I mean, how can you not be sold with a title like that? And the fact that the title alone isn't cliched (as in it doesn't have a number, color, or animal) made me expect something different from this film, and that's pretty much what I got. As it turns out, EVELYN, which is set in the swingin' 70's, is more of a Gothic horror movie than a Giallo, but there's definitely enough of the conventions here that would allow one to lump it into the Giallo genre (blood, black gloves, mystery, and lots of boobs).

The movie opens with someone escaping from a mental institution and running around as he's chased by orderlies. Also, according to the POV shots that we get from the perspective of the mental patient, he's also partly blind. Either that or his vision just gets all blurry when he gets excited. What becomes of this mental patient is a mystery - initially, anyway - as the film then cuts to what is presumably the past since the mental patient is now just a normal dude in a green velvet suit, driving a car at night with a hot babe in the passenger seat. It's revealed that this ladies' man is Alan Cunningham - a wealthy playboy who has a bit of a weird side. You see, he picks up hookers and strippers, all of whom need to fit the requirement of having red hair, and then he takes them to a dungeon full of suits of armor and medieval weaponry and proceeds to act out some sort of fantasy where he has them wear black thigh-high leather boots and surprise-attacks them with a whip. 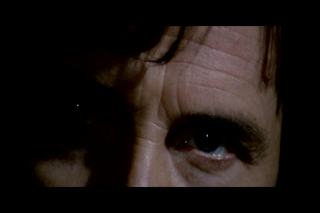 Right away you know this guy must be crazy, because he doesn't even have sex with the chicks before he punishes them. He doesn't actually bring home a lot of women in the film, but it's pretty much established that it's something he does on occasion. The first is a busty hooker, played by Maria Teresa Tofano, and the second is a stripper, played by Erika Blanc, whose name should be familiar to anyone who's watched a decent amount of European Gothic horror. And trust me when I say that if the common hooker was as hot as Maria Teresa Tofano, I'd be a broke motherfucker. Mama mia! 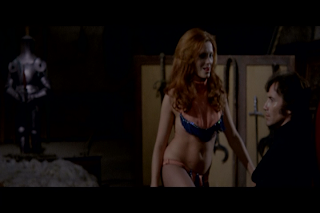 Obviously there's a reason for Alan's actions, and it goes beyond simple perversions. His wife, Evelyn, died a few years ago for reasons that aren't made clear right away. Despite being surrounded, for the most part, by a support group of family and friends, Alan's obsession with Evelyn (a redhead) and his supposed madness that causes him to hurt women who bear a certain physical resemblance to his dead wife consume him. A seance is attempted as a means of "curing" him, but to no avail. It seems his life changes for the better, however, when he meets a stunning blonde woman named Gladys and asks her to marry him in the midst of what starts out as a one-night stand. She accepts, and she's subsequently brought into his world of wealth and excess (he has five maids for fuck's sake - all of whom have matching blonde afros), but things get weird really quick when what we're led to assume is Evelyn's apparition begins haunting them and people are being killed one-by-one by a mysterious black-gloved assailant. 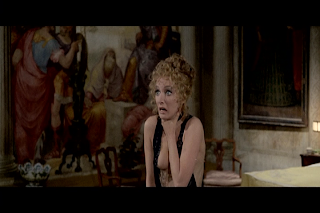 Two things struck me about this film right away: gorgeous women and stunning cinematography. All of the women in this movie are absolutely beautiful. And very much naked. Well, except for the wheelchair-bound Aunt Agatha, but even she's a lot younger-looking than someone who you'd think of as an "Aunt Agatha", and she's very pretty to boot. As far as the cinematography, EVELYN is easily one of the most visually-pleasing Gialli I've ever seen, and it's up there in terms of Italian Gothic horror as well. Everything from the setting to the lighting to the color schemes, EVELYN is simply beautiful, and the fact that the women are eye candy is a bonus. There are a few outdoor nighttime scenes that are ridiculously dark (at one point early in the film, a camera zooms in on something that, judging by the music, is supposed to raise suspicion, but you can't even see what it is), but other than that it's a wonderfully-shot film. 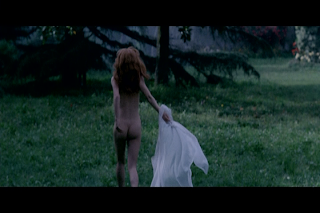 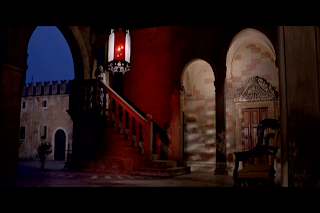 Gradually, more and more info is revealed about the circumstances surrounding Evelyn's death, but it's not as big a revelation as you'd think; it simply leads to other developments in the plot and kinda makes sense of certain things that had led up to that point. For the most part, EVELYN is a straight-up horror movie, but then the Giallo and mystery elements are introduced pretty late into the film, which was surprising but it works and keeps things interesting just when it starts to drag a little. The narrative is kinda weak and predictable, and there's a SCOOBY-DOO moment toward the end that really bothered me, but the exciting climax of the film more than makes up for it. I won't hint at what happens, but I'll just say that there are multiple twists and reveals - some that even Stevie Wonder could have seen and others that come out of nowhere. While it doesn't have as intriguing a plot as some of the more classic Gialli, nor is it scary enough to hang with some of the better Italian Gothic horror movies out there, EVELYN gets points for being sexy, atmospheric, and gorgeous, and at least doing a decent enough job of separating itself from the rest of the pack. Plus, how many movies have you seen where someone gets ripped apart by foxes?