Doesn't the title "COME DRINK WITH ME" sound like the name of a Spanish romantic comedy? No? Well, it does to me. But the actual film is anything but Spanish or romantic. There's a little bit of comedy in there, but it's not a comedic film per se. Produced by Shaw Brothers studios and set during the Ming Dynasty, COME DRINK WITH ME is in fact one of the earlier examples of the Wuxia film produced by Shaw Brothers, and it's highly regarded amongst enthusiasts of Hong Kong cinema. As for me - and I've stated this before in other reviews of similar films - I'm still very new to Hong Kong cinema from this era and don't know a lot about the background of these films, but I enjoy watching them. For example, it wasn't even until doing research for this movie that I even knew it was considered to be a favorite of many. I just knew that it was about a female lead character who kicks ass, which is good enough for me. 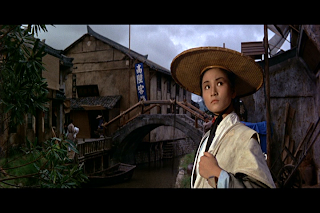 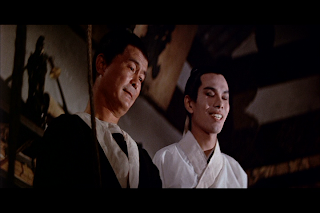 A gang, led by the vampiric-looking Jade Faced Tiger, ambushes a group of government types as they're transporting some prisoners, killing them all in the process except for the Governor's son whom they kidnap and hold hostage in exchange for the release of their leader. It isn't long before the Governor's daughter, who goes by the name of Golden Swallow (you know she's wifey material with a name like that), is sent to reclaim her brother. In a tavern fight sequence early in the film that's very reminiscent of a Western, it's established that Golden Swallow is pretty much the wrong bitch to mess with. Members of Jade Faced Tiger's gang are there, and as Golden Swallow sits down to order a drink, she's individually tested by members of the gang to see what she's made of. A fight ensues, ending with neither side backing down and each side giving the other an ultimatum. It's a great section of the film cinematically and in terms of how the characters are introduced.

During this opening tavern sequence, an annoying drunk guy comes into the picture, who's appropriately nicknamed Drunken Cat. He seems like a throwaway character at first, but he gradually becomes an important part of the story. In fact, his plot thread about someone from his past coming back to haunt him, at times, overshadows the main storyline that's set up and becomes the main focus, but they all sort of tie together anyway. During the film, we see an interesting character arc in regards to Drunken Cat (I love these nicknames), but not before we get a couple of musical sequences involving him and a group of orphans, which were actually a few of the highlights of the film for me. Speaking of which, apparently none other than Jackie Chan himself claims to have been one of the orphans in the film, but it's been disputed by actress Cheng Pei-Pei. 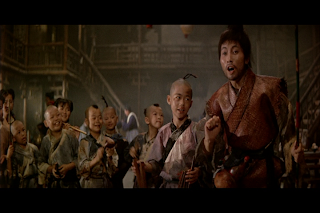 As with most of these movies that I've seen that feature a number of villains instead of just one or two, the characters are diverse and a lot of fun. Not only do the actors playing them have great, menacing faces, but they each basically have their own little gimmicks that make them stand out from the rest of the villains. Even the minor bad guys are memorable because they don't necessarily blend in with crowds of people. My favorite character as far as the villains is the leader of the group, Jade Faced Tiger, who, as I mentioned earlier, almost resembles a vampire because of his white makeup and skinny, Nosferatu-like frame. Having a whole squad of villains is also great because, if used correctly, there's a pecking order established, which introduces a bunch of obstacles for the protagonist as opposed to the ol' black hat versus white hat scenario. 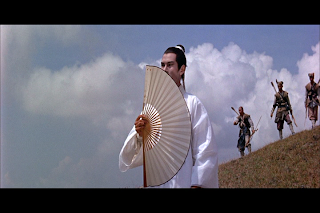 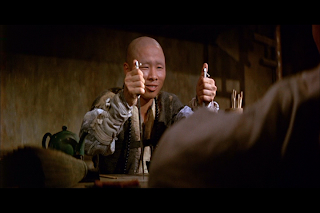 It should be said that there's not a lot of hand-to-hand combat in the film, if any. Most of the fight sequences involve weapons, which is pretty cool, although I do prefer me some insane Hong Kong hand-to-hand fighting despite the inclusion of weapons opening up the possibilities for more bloodshed. One of the things that stands out about this movie to me has nothing to do with the action, though, but rather terrific music, which is hard to describe. It's like a combination of traditional percussion mixed with sweeping Spaghetti Western-esque music that brought to mind Ennio Morricone and a few other composers.

I know COME DRINK WITH ME is a pretty well-respected film, but I was a little let-down with it in certain ways. Don't get me wrong, I still enjoyed this film and don't consider it to be a disappointment as a whole, but in terms of the lead character, Golden Swallow, I was left wanting more, in that her role in the story almost takes a backseat to Drunken Cat and the film basically becomes something different in the third act. I kinda saw it as a strong female character being downgraded for no reason, but that's just my take. Other than that, I quite enjoyed this film but wouldn't consider it to be a favorite of the Shaw Brothers and Hong Kong Martial Arts films that I've seen. Still, though, great characters, lots of action (but not so much that it takes away from the plot), and a good story. On a side note, actress Cheng Pei-Pei was essentially cast in the film because of her ballet dancing skills rather than her acting or presence as an action star, which I thought was pretty interesting.