I used to get excited whenever a new batch of Ghost House Underground movies came out. GHU have kinda strayed from their original run of releasing a bunch of straight-to-DVD horror movies in bulk in favor of doing sporadic releases here and there (which have been considerably lesser in terms of quality), but their track record, in my opinion, was a lot better than their competition at the time, After Dark Films. Even After Dark in the last couple of years have gotten away from releasing a bunch of movies at once and are instead spreading out their tentacles and releasing originals, even dipping into other genres outside of horror. The two years or so that Ghost House and After Dark were releasing horror movies in bulk was a great time. SEVENTH MOON was a part of the last set of movies that Ghost House dropped on us a few years ago, and I remember watching it at the time and being kinda bored with what I saw. 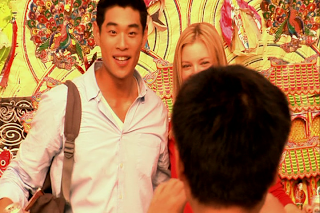 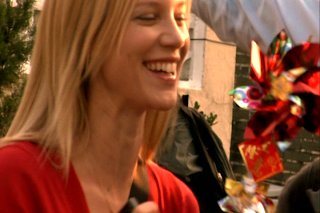 I don't know if I was just burnt out at the time or if I simply wasn't in the mood to see a barely-lit shaky-cam type of horror movie, but I didn't bother finishing SEVENTH MOON when I tried watching it a few years back. As you can see, I decided to give it a shot once again for whatever reason. Probably because I have a thing for Amy Smart now more than I ever have. I've always found her to be cute, but lately I've actually been wanting to go out of my way to see movies that she's in. I even contemplated revisiting MIRRORS for fuck's sake. Anyway, she and actor Tim Chiou play Melissa and Yul respectively in this. They're newlyweds from America who are vacationing in Yul's home country of China to visit his side of the family. After a day of shopping and getting drunk in the city, they're picked up by their tour guide and taken out to the middle of nowhere just as night falls. Their driver parks somewhere and disappears, Melissa and Yul go to look for him, and they return to find the car covered in animal blood. 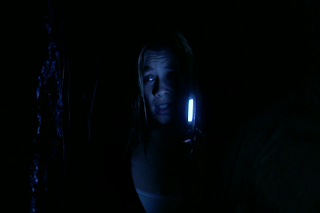 Luckily for the newlyweds, the Horror Movie Gods are smiling down upon them - the car keys are still in the ignition. Needless to say, they get the fuck out of there and they do so quickly, but it isn't long before they wind up stuck in a ditch somewhere. Not a lot of time goes by before they're attacked by ghoulish-looking creatures, and by this point it's apparent that Melissa and Yul picked a shitty time to go on a honeymoon; their trip to China coincides with the full moon of the seventh lunar month, which, according to a local ancient legend, states that the gates of Hell will open and demons will be free to roam the land for a single night. The locals sacrifice animals during this time as an offering, and the newlyweds unfortunately find out the hard way that the ghouls need to claim themselves a human before the sun rises. 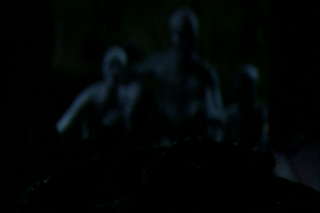 Again, I'm not sure why I disliked this movie so much the first time around. I dug it this time. A lot. It should be said that the film is really dark; not in terms of subject matter or content but rather the look of the film. For about ninety-percent of the running time, the lead characters are out in the middle of nowhere at night. There's no artificial lighting around, which means that it eliminates the chance of the filmmakers lighting the film in a way that would look believable. Also, director Eduardo Sánchez (BLAIR WITCH PROJECT) went with a veritee style of shooting the film in order to create an organic look, so a majority of the camera work is handheld and quite shaky in spots. Normally I'd be a bit bothered by this aesthetic if not used in the context of a found-footage movie, but it actually works here; you can see enough of what's going on and there's an intimate sort of feeling to the film, in that there's not much of a disconnect, in theory, between the audience and the characters. 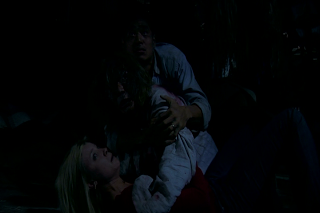 Speaking of which, it's pretty easy to dislike characters in a film like this since you're essentially watching them run around and scream and complain for about ninety minutes. In this film's case, I found both Melissa and Yul to be very likable. Amy Smart and Tim Chiou have great chemistry and their comfort with each other on screen translates well into them being a believable couple. I don't really know much about Tim Chiou but I like him in this because he's not portrayed as overly heroic (in other words, not an annoying douchebag), and of course Amy Smart is adorable and seems like a naturally likable person. I also dig Smart's character in this because she's kind of an airhead but she has a fighting spirit and isn't completely helpless. Not sure how much of the dialogue was ad-libbed, but Smart delivered one of my favorite lines in the film in the midst of a ghoul-attack: "This place is so weird!" No shit, Sherlock.

Overall, I quite liked SEVENTH MOON. Great lead characters that you can pull for, cool minimalist creature effects, good atmosphere, and a brisk eighty-five-minute running time. It's not the scariest film you'll ever see, but it's still effectively dreadful in spots. There's also a great jump scare early in the film that, even if I told you where it was, it would probably still get you. Can't see myself ever revisiting this for a few years, if ever, but it's a neat little horror movie and, most importantly, it's original.