This here is the first entry in a new weekly feature where I'll be talking about two films that share a common theme or trait. The two films this week are tied together by blindness. In one film, blindness is presented as a legitimate handicap, but also as a means of deceiving people. In the other film, blindness is presented as a contagious disease. Both are very different films, and aside from the fact that blindness plays a key part in them, they have nothing in common.

The first film is the thirteenth entry in Japan's series of ZATOICHI films, ZATOICHI'S VENGEANCE. I have only seen a handful of these movies and reviewed some of them last year, but in case you never read those reviews or you're not familiar with the films, I'll give you some quick background info on them. The ZATOICHI films were very popular in Japan back in the day, and they were period films set in Japan's feudal era. The eponymous character was a drifter, a deadly swordsman, and a compulsive gambler. He was also as blind as a bat. Each film would see him getting into some sort of adventure that usually involved him protecting peasants from the Yakuza or an assortment of corrupt figures, and they'd usually end with him dispatching large groups of people with his trusty sword. Even though he was blind, his other senses allowed him to function almost as well as someone with sight, and in some cases (especially when it came to swordplay), he was better at doing things than most sighted people. 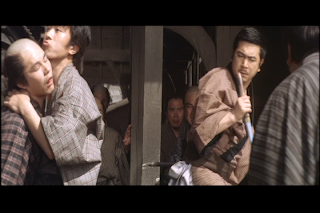 The thing about the character of Zatoichi is that he's never the type to go around and boast about the fact that he's a master swordsman who's capable of slicing even the most skilled foes to ribbons. In fact, he'd always go out of his way to hide that fact in order to blend in with people and come across as a lowly blind man. The reason for this is that he was essentially a con man. His first love, it seemed, was gambling. Whenever he'd join a table, people would think of him as a joke and saw it as an easy opportunity to take a handicap person's money, but Zatoichi would always somehow find a way to win. This is basically how he survived and got enough money to get by.

In ZATOICHI'S VENGEANCE, 'Ichi, as usual, embarks on a quest that leads him to some random village where he doesn't know anyone. While minding his own business and drifting across the country like he normally does, an attempt is made on his life. His attackers find out the hard way that perhaps they should have kept walking. Before he leaves the scene, Zatoichi meets a dying peasant who was attacked by the same group of people. Long story short, Zatoichi needs to deliver a sack of money given to him by the dying man to a young boy in a nearby village. He does so, but while there he gets mixed up in some shit. As if protecting the villagers (including the young boy) from a bunch of goons from the "Gonzo Clan" wasn't enough, 'Ichi finds himself as the target of a ronin who agrees to kill him for money. Prior to this, another blind character - an elderly priest - came into the picture and has basically assumed the role of Zatoichi's conscience. The blind priest is an interesting character, in that he only interacts with Zatoichi and appears sporadically. There could be some sort of unspoken paranormal element to this character's role in the story, but that might be a stretch. 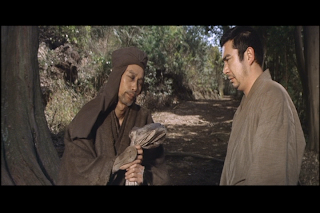 Yeah, so all of that going on in an 80-minute film, but yet it's still a bit slow. To be fair, though, the ZATOICHI movies aren't exactly fast-paced action extravaganzas full of swordfights and bloodshed. The ones I've seen have been very plot-driven, but they're even more character-driven than anything else, and ZATOICHI'S VENGEANCE is no different. This might be my least favorite of the ones I've seen so far, but that doesn't mean it's bad by any means. It seems that each of the films has something unique to offer, and in this case we're shown a much more contemplative and self-aware side of 'Ichi than in previous films (again, just going based on the ones I've seen). In other words, he's basically set straight by the priest, whereas in the other films he hasn't really had anyone to pull him back in and give him a reality check. Zatoichi is, after all, a very flawed character and sort of a glorified anti-hero. 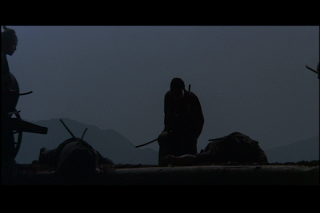 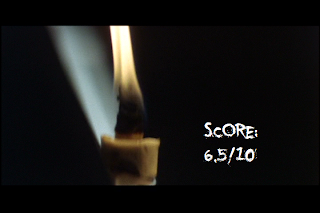 In ZATOICHI'S VENGEANCE, we get some great supporting characters that are easy to invest in, some effective comedic moments at the right moments, an expectedly great performance from lead actor Shintarô Katsu (and the rest of the cast for that matter), and some awesome swordplay and choreography. Another thing worth noting is an impressive sequence involving taiko drums. As I said earlier, each of the ZATOICHI films seem to have something unique that set them apart, whether it be thematically or stylistically, but this can also pertain to set-pieces or action sequences. Anyway, getting back to the taiko drums, some of the Gonzo Clan's goons devise a plan to deafen Zatoichi with loud music as a means of eliminating his most powerful sense, and the way that this sequence is shot and executed is pretty cool. If I have a complaint, though, it's that the title is somewhat misleading. The word "Vengeance" inherently evokes images and ideas of something epic or personal when it's actually not the case here. There's really no more vengeance in this film than in any other films. Overall, decent, well-done, and far from unwatchable, but there are other films in the series I'd much rather watch again.

The next film is BLINDNESS, which is based on a novel by a Nobel Prize-winning author. The premise sounded interesting when this movie came out years ago, but then I'd heard bad things about it, which caused it to just drop off my radar completely. Great cast, though. Julianne Moore, Mark Ruffalo, Danny Glover, Gael Garcia Benal, and others. Since I rambled about the last movie, I'll try to keep this one as brief as possible.

In BLINDNESS, the entire world apparently goes blind because of a disease, and it seemingly all starts with the group of people that the film revolves around. Amongst all of the blind people, however, is Julianne Moore's character, who miraculously maintains her sight despite the disease being contagious. Her character oversees (yeah, there will be quite a few unintentional puns here) a group of blind people who are basically shunned by the rest of the society and imprisoned when they're led to believe that they're just gonna be quarantined until they can get some proper help. Well, the help never comes, and they're left to rot as armed guards do everything in their power to make sure they don't leave the compound. One of the characters somehow acquires a gun and organizes a group of followers in the blind community, and together they use their power to control the food supply and segregate themeslves from the rest of the group. Moore's character tries her best to act as the den mother to the rest of the blind community, but it eventually takes its toll on her for obvious reasons. There's an inherent feeling of hopelessness throughout the film since there's no solution to the problem in sight (told you). 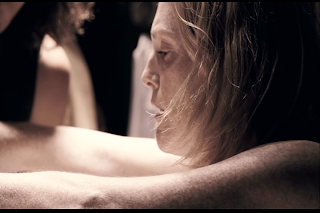 BLINDNESS sort of makes a commentary on how the media instills panic into society and causes them to react to certain things without compassion, amongst other things. I haven't read the source material and I could just be making assumptions here, but those are my observations. At the end of the day, though, the main focus of the story, it seems, is to simply present a "What If" scenario. What if everyone in the world suddenly went blind? I'm sure there's something much deeper here than that, but I'm having a hard time seeing it (yep, another unintentional pun) and I don't really care enough to dissect the film and research the novel. I'm guessing that certain things were lost in translation in regards to the novel being adapted. Well, I hope that's the case anyway, because if the novel is anything like this film's script, I sure as hell don't want to read it. 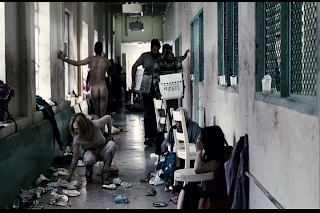 Despite a lackluster script and some laughably bad performances, I still kinda liked BLINDNESS. It has a tendency to be rough in terms of content, which was a little surprising. Rape, violence, racist dialogue, and full-frontal male and female nudity are things you don't really expect to see in a somewhat star-studded mainstream film, but you get those things with BLINDNESS. The film, ironically, is also beautifully shot and a visual treat for the most part. One noticeable problem, however, is that some of the actors are terrible at being blind. Apparently the cast members got together and actually practiced walking around blindfolded prior to shooting the film, but there are times throughout where a few of the actors seemed to forget that they were blind, or at least did a shitty job of being convincing enough. 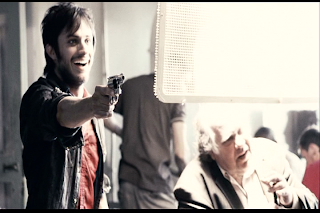 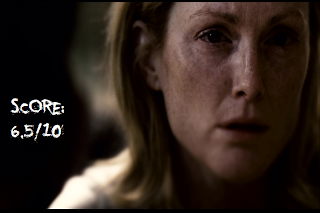 The way BLINDNESS ultimately plays out is somewhat interesting. At about an hour in (the movie's two hours long), the aesthetic begins to resemble that of a post-apocalypse movie, and the back end of the film greatly resembles a virus zombie movie in the vein of 28 DAYS LATER and the like, just in terms of the visuals and the setting as opposed to an overwhelming sense of dread. When it was all said and done, though, the film lost me because of the script, the dialogue, and the performances. Even Julianne Moore in all her freckled glory wasn't enough to win me over. I think I would be able to appreciate this film under different circumstances and with more of an open mind, but at face value and just simply viewing it as a piece of entertainment, I thought it was OK at best in spite of a few glaring problems.