I need to preface this review (mainly so I don't get crucified by any passionate fans of Hong Kong cinema out there) by saying that I'm not the most knowledgeable person when it comes to the films of Shaw Brothers and the films of Hong Kong in general, nor do I claim to be. On a scale of 1 to 10, I'm at about a 2 as far as my knowledge of Martial Arts films is concerned. I do enjoy the shit out of them though. In fact, I have yet to see a Shaw Brothers film that has let me down, and in most cases I'm blown away by how fun and exciting these films are. My track record with Martial Arts films has been better than with most genres, but yet I never go out of my way to see them. Couldn't tell you why. With that out of the way, let's talk about KING BOXER, shall we?

Lo Lieh, who I'd venture to say was one of the more well-known actors out of Hong Kong in the 70's, plays the lead character in this film, Chih-Hao. KING BOXER builds up to a Martial Arts tournament that will establish the best school in the particular region that the film takes place in. Chih-Hao makes it his goal to enter the tournament and win at the request of his teacher. The reason why his teacher pushes the tournament on him is quite simple: one of the rival schools appears to be a lock to win the tournament based on the amount of great fighters they have, but they're basically a group of rotten bastards who spit in the face of honor and respect. Along the way, however, Chih-Hao and those close to him find themselves in the crosshairs of the dastardly Meng Tung-Shan and his followers, who will bulldoze over anyone in their way on the path to the big tournament. 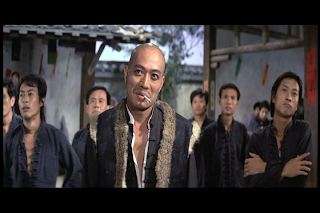 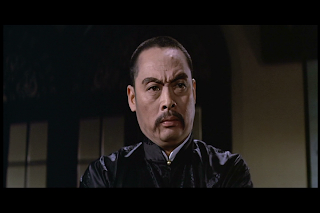 KING BOXER isn't the most entertaining Shaw Brothers Martial Arts movie that I've seen, but it's certainly one of the most well-written. What impressed me most about the film is how everything in the plot actually goes somewhere; by the end of the film, every single loose end you can think of is tied up rather nicely. Every single character - if at least for a single scene - plays a crucial part in the film and acts as an important piece in the overall puzzle. Speaking of which, the characters are great as well. You have your typical "black hats" and "white hats", but I appreciate how colorful the characters are, mainly in the case of the antagonists. Each of the villains have a distinguishable look and a certain trademark that drastically separates them from the rest of the bunch. I'm not very good with names and remembering who's who when it comes to these movies, so while taking notes I referred to the antagonists as Baldy, The Random, The Son, and The Japanese Guys. My favorite characters are the aforementioned "Japanese Guys", which consist of a vat named Okada and his two henchmen, who are brought in by the lead villain as an insurance policy. Their sole purpose is to terrorize Chih-Hao and those close to him, and boy do they. Okada and his cronies are no joke. 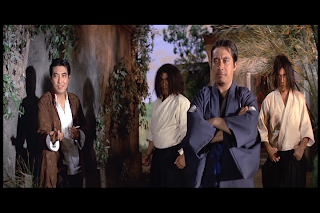 Throughout the film, it's pretty clear that everything is building up to something huge. Certain things are teased, and the film brilliantly whets your appetite for the inevitable, whatever that may be. The thing is, the tournament itself only plays a part in where the film ultimately goes rather than the tournament being what the entire movie revolves around. Other than that, KING BOXER features a lot of the conventions of Martial Arts films. You have the hero who undergoes intensive training, the bad guys establishing themselves as such and "getting heat" by doing despicable things, a helpless character close to the hero getting crushed by the villains, a down period where a certain character recovers and is overwhelmed with doubt, the damaged character realizing his potential, comeuppance, so on and so forth. Pretty formulaic storytelling, but effective nonetheless because of the emotion and basic psychology involved. You care about Lo Lieh's character, and part of it has to do with how he's contrasted by the villains. Again, it's simple psychology and not rocket science.

One of the plot points of KING BOXER is the "Iron Fist" technique. It's one of the things that Lo Lieh's character strives for throughout the film. Admittedly, I didn't find the revelation of the Iron Fist to be all that impressive based on the build-up, but it doesn't change the fact that it becomes a "thing" when he finally does it. The reactions on peoples' faces when Lo Lieh finally whips out the Iron Fist are classic. It's kinda like when Ben Stiller does the Magnum at the end of ZOOLANDER. Yes, I just name-dropped ZOOLANDER in a review for a renowned Shaw Brothers film. 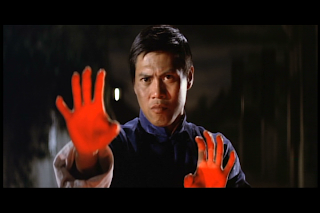 I could go into detail about each of the characters and would take great pleasure in breaking the entire movie down by set-piece, but I'll leave that up to the experts. KING BOXER is immensely satisfying in many ways. Aside from what I talked about, the action and fight sequences are great, the amount of violence is appropriate, and there's some stellar camera work throughout the film as far as how the action is captured and how fluidly the camera moves during certain scenes. Another great recommendation from Brian at Cool Ass Cinema. Speaking of which, you can read this article to get his take on KING BOXER.