Lead actor John Barrett is a legit martial artist who possesses belts of varying colors in a number of styles. He's also worked and trained extensively with Chuck Norris for a number of years, and AMERICAN KICKBOXER 1 (yes, there's actually a "1" in the title) blurs the line between a vanity project and a passion project for Barrett. I can only assume that this was a personal project for him based on the fact that he has a "Story by" credit and that he's the lead actor, but who knows. Whatever the case, he plays a world champion kickboxer named BJ Quinn, who's stripped of his title and suspended for five years after accidentally killing a man at a party. After a twelve-month prison sentence, he tries to ease his way back into the sport while his much younger arch nemesis Jacques Denard reigns as champion and fights in front of audiences of people who don't look like they're out of place at all. 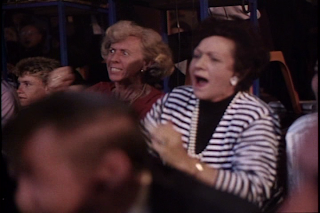 So yeah, I'm all for cheesy 80's movies (this is a 90's movie, but it's an 80's movie in spirit) and, even though I don't cover them much, I do love a good sports movie, but AMERICAN KICKBOXER 1 is a mess. The thing about Barrett's character is that no matter how much he's made out to be the underdog who has to fight his way back to the top, he's too much of a self-centered asshole for me, personally, to give a shit, and I honestly can't see how anyone would root for this guy. But, for what it's worth, I'll go ahead and talk about his character in as much of an unbiased manner as I possibly can. It's established not long after he's introduced that Barrett has possibly overstayed his welcome in the sport; he's older than a lot of his opponents, and there's somewhat of a youth movement on the rise. He reeks of some crusty old veteran who refuses to bow out gracefully, but at the same time he has the skills to maintain his status as a champion. 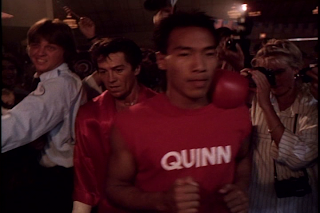 The Security Guard's facial expression might be my favorite thing about this movie.
Once Quinn is released from prison, it's clear that the sport of competitive kickboxing has passed him by, and even if he was ready to jump back into it, a lingering five-year suspension prevents him from doing so. You'd think the experience would have humbled him, but it's not the case. It's almost as if he feels everything should be handed to him and that his former promoter should be obligated to get the suspension lifted, so he takes it as an insult when he's given a job as a lowly judge at an upcoming competition. The temperamental Quinn responds by treating his girlfriend like shit. She kicks him to the curb and he goes into seclusion. He's later pulled out of the gutter by an apprentice of his (who he also treats like shit), and the next thing you know he's fighting Jacques Denard for the world championship. I don't recall his suspension being lifted or if the five years had in fact passed since I struggled to pay attention by that point, but whatever.

The acting here is actually serviceable, which is still a lot better than what I was expecting. The film's biggest problem, in my opinion, is the pacing. It's only a ninety-minute film, but it honest-to-God feels like it's over two hours long, probably due to the insane amount of training montages in the film. At one point there's even a montage of just a bunch of random clips that don't even show Quinn training. Aside from the montages, expect lots of press conferences too. Seriously. There are a few moments of hilarity sprinkled throughout, though, like a mulleted kickboxer who pops n' locks while fighting (a white guy, mind you), as well as the camera cutting to one of Denard's corner-men (a huge black guy) during the main event screaming like a girl and waving his hands around. But, amidst the awfulness that is AMERICAN KICKBOXER 1 is a shining light that almost redeems the film. 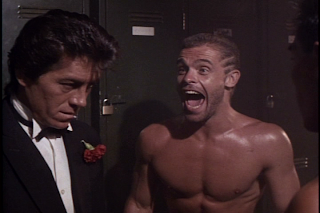 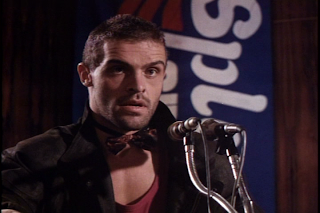 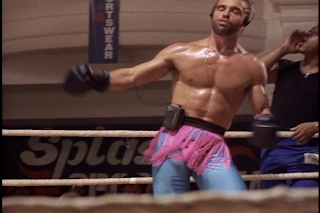 It seems that every sport has a showman who blurs the line between insanity and a strong desire to entertain the masses. When it comes to fictional kickboxers, Denard is that guy. To merely describe actor Brad Morris's performance as Denard is impossible; it's something you just need to see for yourself. Morris is from South Africa, but his accent in the film suggests he's either French-Canadian or Russian. Also, I don't know who picked the guy's wardrobe (I'd like to think that Morris did), but every succeeding outfit he wore was a revelation in pure awesomeness. Denard is like a trash-talking male stripper with ADD; not the most creative analogy, but accurate. My favorite Denard line is directed at an obnoxious journalist who unfortunately appears quite often in the film: "Your mother is the dog." Not "A" dog, but "THE" dog. Finally, for an actor who didn't really star in a lot of movies, Morris sure has quite the impressive bio on IMDB. Geez.

As great ol' Jacques was, he wasn't enough to save this movie. As I said, the pacing is really bad, to the point where it's almost unbearable to sit through. On top of that, you have the most generic 80's sports-movie music playing over the montages, which take up about half of the film on their own. I wanted to like AMERICAN KICKBOXER 1, but I just couldn't. In fact, it lost me before the first act was even finished. I think this would be a great movie to watch with a group of friends, preferably while drinking, but I don't really drink that much and I don't have friends either, so yeah.