In the midst of a huge promotion with a big-time law firm, a young lawyer named Andrew Beckett is suddenly stricken with AIDS. Following his abrupt diagnosis, he's fired from the law firm for supposedly losing an important file. Believing he was wrongly fired and that the file debacle was a cover up for the fact that the firm didn't feel comfortable having an AIDS-ridden homosexual working for them, he seeks the help of an ambulance chaser named Joe Miller based on their past history as opposing lawyers on another case. Beckett wants to sue the law firm, but Miller initially wants nothing to do with it because of the fact that he's a homophobe. Miller eventually changes his mind and represents Beckett in a lawsuit against the firm, and a David versus Goliath courtroom drama ensues. 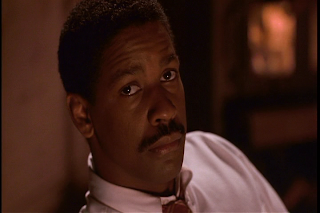 Of course there's a bit of irony with the relationship between the characters of Beckett and Miller, which is one of the things that makes PHILADELPHIA so interesting. Beckett is an open homosexual (although, for professional reasons, he never mentioned it to the law firm when he was employed by them) and Miller is a very opinionated and outspoken homophobe. Even throughout his dealings in the case and generally maintaining a professional attitude, it doesn't change the fact that Miller hates "faggots" with every fiber of his being. Even more so than the members of the law firm that suddenly dropped Beckett like a bad habit, Miller is the personification of prejudice and hatred as it pertains to how homosexuals were viewed at the time (and still are despite there being more of widespread acceptance of homosexuals - at least in the United States anyway). The fact that Miller is so full of hate is both ironic and somewhat appropriate considering he's an African-American who, I'm sure, has had his fair share of slurs thrown at him.

For the character of Joe Miller to even come across as mildly likable is a testament to the acting abilities of Denzel Washington. Even if you don't necessarily agree with his character's views on homosexuality, you can't help but be drawn to the guy. Of course you pull for him throughout the film because he's fighting for the victim, but also because Washington is such a powerhouse of an actor who demands your utmost attention. At the risk of sounding like a racist (not my intention, I assure you!), Denzel Washington is an animal. I don't really get the opportunity to talk about him on The Death Rattle since his films typically don't fit the criteria of what this site is about, but Denzel has been a favorite actor of mine for a while now, and it's because he adds so much to pretty much anything I've seen him in. 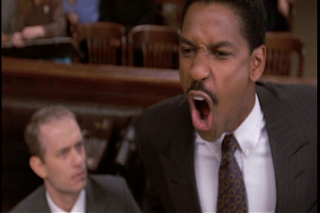 In an interesting use of psychology, Washington's character actually uses his stance as a homophobe to the advantage of the lawsuit. Because he dislikes homosexuals, he's able to put himself in the shoes of the homophobic law firm and get inside their heads. There's also a lot to think about as far as why Miller accepts the case in the first place. Judging by how much he puts himself out there in the film to potential clients (handing out business cards to everyone he meets and investing in a television ad), there's the strong possibility that he took the case simply for exposure. There's also the small chance that he actually believes in his client's case and is going up against the powerful law firm as a means of standing up for the "little guy". The great thing about that is you never really know for sure.

I know I've praised Denzel thus far, but it's not to discredit Tom Hanks in what has easily been one of the most important roles of his career. Not at all. Hanks is absolutely phenomenal in this and he makes you care about his character so much that it's genuinely fucking heartbreaking to see his health inevitably decaying throughout the film. There's nothing I can say about Hanks in this film that hasn't already been said, and he has the accolades and awards as a proof of just how great he was in this. Also impressive is Antonio Banderas as Beckett's partner, and perhaps the most heartbreaking thing about the film isn't so much Beckett's slow decline in health, but rather how Banderas sticks by his side through it all and until the end. Personally, I found Banderas and Hanks to be utterly believable as a couple. 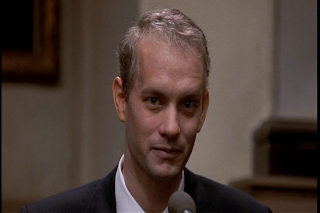 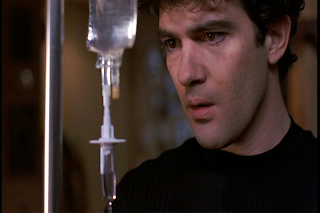 While I've been on the subject of the cast, it was a pleasant surprise after not seeing this film for so many years to see Charles Napier and Roger Corman in this. The late Charles Napier plays the judge (damn straight), and Roger Corman plays a witness. At one point they're both in the same shot, which is a cool thing to see for a fan of exploitation like myself. To hear Denzel Washington calling The Nape "Your Honor" makes me happy, and yes, Napier even rocks the aviators - or at least glasses that look like aviators anyway. 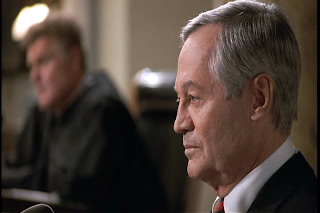 Unlike your typical courtroom drama, the case in this film doesn't end with a huge celebration or people screaming and jumping up and down in the court room. It just kind of ends. When it's all said and done, it's clear that PHILADELPHIA isn't about the trial itself, but rather a number of social issues that were a bit more prevalent in the 90's (and the 80's for that matter) than they are today: the AIDS epidemic, safe sex, equality, so on and so forth. To critique it and give my take on the more technical aspects of the film would be pointless since it's such a mainstream film that's been around for a while and reviewed by the top critics across the world, so I'll just say that, while it's not a masterpiece in my opinion, I can't find a whole lot wrong with it; PHILADELPHIA is an important film and wonderful for what it is.

Roger Ward's thoughts:
‘Philadelphia’, 1993, starring Tom Hanks and Denzel Washington, is a tour de force by both actors. Also kudos must go to the film itself for examining, at what was at that time, the touchy subject of AIDS. Tom Hanks has surprised me with his climb through the ranks from light comedy buffoons to become the dramatic icon that he is today. Tom's star shines brightly, not only as an award-winning actor but as a producer, along with his wife Rita Wilson, of profit-making and entertaining fare, and it is refreshing to see him, mid-career as it were, performing so realistically in the above mentioned film. Denzel too, is on his way to the super star that he has become, originally playing typical African-American roles, his first appearance was uncredited as an ‘Alley Mugger’ in 1974’s ‘Death Wish’, Denzel has climbed through that racial barrier, stopping now and again to play to type in ‘Mo’ Better Blues’ (1990) and ‘Mississippi Masala’ (1991) and ‘Malcom X’ in 1992. Although prior to that, in the television series ‘St. Elsewhere’, 82 to 88, Denzel received recognition and respect by playing the continuing role of Dr Philip Chandler. He has of course played a diverse range of characters since then and his latest offering ‘Safe House’ of which he co-produced, has the tall and handsome devil swaggering through this action packed masterpiece with the aplomb of the experienced and confident pro that he is.
It would be a pleasure and a thrill to be playing opposite either one of the above two icons.