FORTRESS is based on a book, by Gabrielle Lord, that itself was based on the true story of the 1972 Farady School kidnapping in Victoria, Australia. It was produced for Australian television and eventually shown there in theaters, only to be picked up by HBO in the United States.

It's hard to believe that Rachel Ward has legitimately been recognized for her acting when she's been terrible in the few genre films I've seen her in (this and the early 80's slasher NIGHT SCHOOL), but whatever. Here, she sounds like she's deaf when she talks and she plays a teacher at a school that only consists of one class with kids of various ages. Her and her class are abducted by four masked men with shotguns, and Ward's character remains calm despite the circumstances, but that could be because it's hard to take grown men in goofy animals masks seriously. They're subsequently dumped in a cave and blocked in by a boulder. From that point, the film focuses on the teacher as she tries to keep the children calm and teach them survival skills in the process. The kids sing annoying songs to keep themselves occupied. 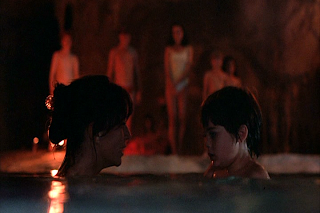 I can't really talk about what happens from the cave scenes onward because I'd be getting into slight spoiler territory, but that's the gist of it. There's obviously a reveal at some point regarding the motive of the masked abductors, as well as the question of whether or not Rachel Ward's character and the children manage to escape from the cave somehow. The only notable cast member other than Rachel Ward that I can think of is Vernon G. Wells (who I interviewed HERE) of COMMANDO and MAD MAX 2 fame. He plays one of the masked men, but the strange thing about Wells in this film is that he's masked the entire time and never shows his face. You'd think they'd capitalize on his familiarity at the time (this was well after MAD MAX 2), but I guess not. Speaking of which, the masks are odd: Santa Clause, a duck (Wells), a mouse, and a cat. I will say, though, the cat mask is pretty cool despite the fact that it's... well... a fucking cat mask. 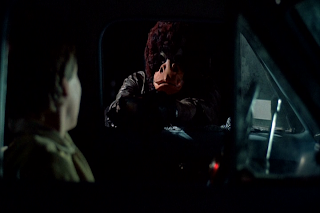 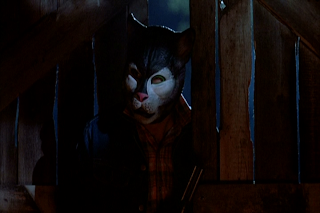 Perhaps the most noteworthy thing about the film is its incredibly weird and jarring Danny Beckermann score. It's Simonetti-esque at times, but that's not necessarily a good thing. In most cases the music doesn't fit the tone of the film, and in some cases it's almost too spot-on, if that makes any sense. For example, when the thug in the cat mask appears on screen, you'll hear a "Meow" noise created by a synthesizer if I remember correctly. I'm all for a good synth score, but in the case of this film it's a bit too much and really goofy at times. 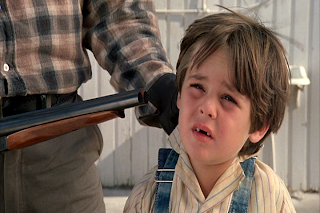 FORTRESS actually looks pretty good for a TV movie. It's shot fairly well and the cave set where a good chunk of the film takes place looks damn good. But unless you have some sort of personal attachment to this film, it's a "one watch" movie for the general film fan or anyone watching it out of curiosity. It gets pretty childish towards the end in the midst of some gritty violence, with Ward and the kids building a fort and setting boobie traps and whatnot. There's also some awkward child nudity and some surprising scenes of one of the kids in particular (Toby, played by Richard Terrill) getting abused and having a gun shoved in his face. FORTRESS certainly won't stimulate your mind in any way, but it's an odd little film that's worth checking out if you're curious.