This movie fucked me up as far as how to approach writing about it. It's basically two movies in one. On one hand, you have Robert Forster playing a father who's son is senselessly murdered by a member of a gang called the Headhunters during a home invasion. When one of the gang members is basically let off the hook by the corrupt judge, he flips out in court, attacks the judge, and ends up being the one who gets sent to prison, where he vows to avenge his son's death upon his release. On the other hand, you have Fred "The Hammer" Williamson, who leads a vigilante squad comprised of fed-up citizens who feel they've been let down the by system. They drive around in a van, abduct criminals, and make examples out of them. The Neighborhood Watch from Hell. Anyone wanna take a guess as to how these worlds collide? 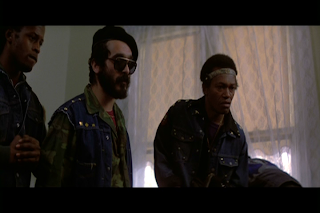 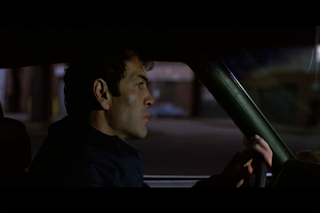 Talk about setting the motherfucking tone. This William (MANIAC) Lustig-directed film features one of the best opening sequences I've ever seen. What initially appears as Hammer breaking the fourth wall and talking to the camera is eventually revealed to be his character speaking to a room full of equally disenchanted citizens who are frustrated with how the city handles the insane crime rate, being that they're involvement is basically non-existent. The scene is intercut with footage of ordinary citizens emptying bullets into targets at a makeshift firing range as Hammer preaches to the onlookers. As Hammer wraps it up, the film quickly cuts to the opening credits sequence, which consists of giant white lettering and an awesome, hand-clap and synth-infused theme song that sounds like something out of a top-notch Eurocrime movie, except on steroids. 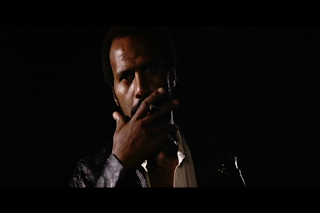 If that opening sequence doesn't just grab you by the balls, something's wrong with you. And on to the film, which, because of the revenge theme and the grimy NYC setting and the stereotypical 80's gang of urban hyenas, comes across simply as DEATH WISH without Charles Bronson. I certainly won't deny the fact that it's not doing anything that the first two DEATH WISH films did before it, nor will I deny its complete lack of originality, but it doesn't change the fact that Bill Lustig took a simple idea and created a worthwhile genre entry with VIGILANTE by making it entertaining and injecting a level of style and ultraviolence that wouldn't seem out of place in a 70's Euro-crime film.

There's nothing particularly noteworthy about the film's structure. It follows the simple revenge movie formula. VIGILANTE keeps a great pace until somewhat stalling towards the back end before literally going out with a bang. What makes VIGILANTE a standout film, in my opinion, is its style and the cast. Robert Forster plays his role with conviction. The Hammer seems to be in full-on Blaxploitation mode, and his scenery-chewing is a bit distracting at times, but his presence is undeniable. Legendary tough-guy actor Woody Strode appears in the film as a prison inmate who acts as Forster's protector, and even at his obviously old age (pushing 70), he still manages to quickly drop the monstrous Henry Judd Baker to his knees during a prison brawl. Joe Spinell, who director Lustig immortalized in MANIAC three years earlier, and Steve James make small appearances in the film. Don Blakely is chilling as the deranged member of the Headhunters who blows Forster's son to pieces with a shotgun; his subtle mannerisms and character traits make him a believable psycho. 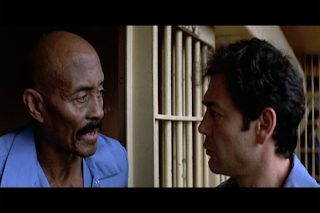 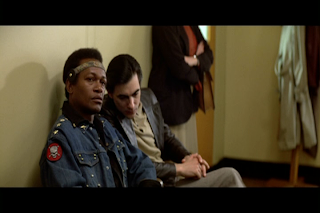 To anyone out there who thinks HOBO WITH A SHOTGUN and other exploitation throwback films like it are, like, "the greatest things ever!", do yourself a favor and watch the real deal in VIGILANTE. Aside from being a solid film, VIGILANTE is one of those great cinematic time capsules that preserves the filthy but nonetheless fascinating aesthetic of a bygone era in one of cinema's greatest cities.