I rarely booze it up these days, but I had such a shitty night at work last week that I actually bought a tall can of Bud Light and thought to myself: "Fuck yeah! I'm gonna drink this whole beer as soon as I get home! Boo, work!" Instead, I ended up failing miserably at catching up with the third season of FRINGE and subsequently went to sleep purely out of boredom, and now I have a tall can of Bud Light in my fridge that I probably won't drink. Well, it's a little too late to say this now, but I passed up a great opportunity to crack open that tall can last night as I watched W IS WAR, because the viewing experience would have been much more enjoyable with a light buzz. Sober (and tired), though? Yeah, sort of, but admittedly I wasn't in the mood to lower my standards for cinematic insanity of the Filipino variety. 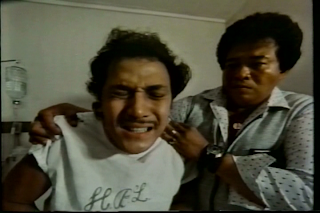 The plot for W IS WAR is very simple. A cop, who's simply known as "W2" (yeah, I dunno), bites off more than he can chew when he tangles with a group of bald-headed, leather-clad footsoldiers who work for a mysterious opium dealer named Nosfero. W2 kills Nosfero's brother, and the gang retaliates by terrorizing him and his girlfriend. Apparently they end up raping W2's old lady, but they never actually show it in the film; what we see is limited to members of the gang laughing maniacally as they shove her around and make her cry. This sparks a war between a distraught W2 (pictured above, looking constipated) and Nosfero, and in the meantime our hero is suspended from the police force and has to take matters into his own hands. It all builds up to a rather epic showdown that takes up a good chunk of the film's final twenty minutes. 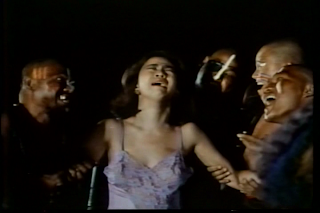 Rape
I can forgive a lot of things when it comes to movies like this, but there's really no excuse for piss-poor editing, is there? I mean, I can't imagine the budget being so low that they couldn't afford someone who was capable of simply editing scenes together to come up with a final product that was moderately coherent. Apparently they couldn't, because the transitions from scene to scene in this film are anything but smooth. For example, there's a scene where W2's fiancee is having sex with another man (the rape apparently turned her into a nymphomaniac), and then it suddenly cuts to her sitting up in bed and explaining to W2 why she just cheated on him as the other man involved gathers his clothes and scurries out the bedroom. But I guess this is one of the many things that gives W IS WAR character, right? 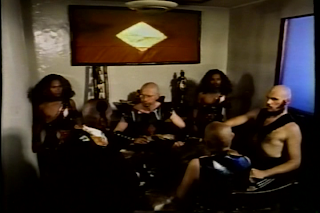 Let's talk about Nosfero's gang for a second. As far as I know there were no signs of an apocalypse ever transpiring, but yet the villains (all 200+ of them!) dress like they're straight out of MAD MAX (or, more appropriately, one of its many low-budget rip-offs). They look like a combination of Filipino Neo-Nazi skinheads and leatherboys who look like they're on their way to a fetish club. Most of them are bald (even the women), but some of them have mohawks and painted faces. Some of them ride around on motorcycles, and other simply run behind them and try to keep up on foot. The motorcycle to gang member ratio is way off; at any given time, anywhere up to five people can be seen on a single motorcycle. Nosfero wears spiked gauntlets that look like GWAR hand-me-downs and is accompanied at all times by two bearded, uzi-carrying dwarves. Amongst the hundreds of Filipino extras are two white men: Praxis and Pentagon. Aside from sounding like he belongs in Mortal Kombat, Praxis looks like some random middle-aged lawyer, except he dresses like Warlord from the WWF, post-Powers of Pain, when he had that crazy-looking black outfit and Phantom of the Opera mask. Pentagon is easily my favorite character in the film. I dare not describe him, so as to not spoil some of the ridiculous surprises in store should any of you seek this film out. 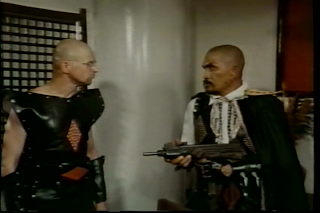 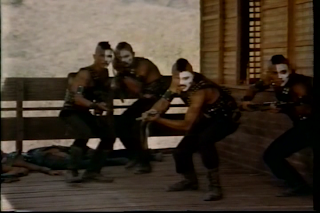 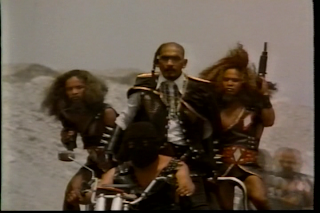 W IS WAR is easily one of the best examples (that I've seen) of exploitation-era action movies that are so genuinely BAD that you can't help but be in absolute amazement of what you're seeing. However, I have a low tolerance for these sorts of films. I don't particularly seek out "bad movies", and when I do, it's very rare that one of them wins me over. W IS WAR has many memorable and absurd aspects about it that I found enjoyable, but the first hour of the film was pretty uninteresting for the most part. The final act of the film (the last twenty or so minutes), on the other hand, is absolute insanity and almost redeems the rest of the film. The back end of W IS WAR is literally around twenty minutes straight of explosions, gunfire, Filipinos falling from trees, and (very slow) motorcycle chases. W2 and his accomplice drive around in a modified MAD MAX style car and wear suits of armor during the big battle. Suits of armor! Did the last twenty minutes make me a fan and change my overall outlook on the film? Not completely, but it does deem the film worthy of a somewhat high recommendation from myself to anyone who hasn't seen it. At this moment, I can't think of a better movie to watch in a party atmosphere or group setting than W IS WAR.