A 70's film opens with a stupid hippie song that basically describes the movie for you while making a depressing commentary of the underlying moral of the story. To follow it up, the atrocious hippie song gets its own standalone credit during the opening title sequence, as if anyone's interested. Next, we get a glimpse of the bad guys - one of whom is a female, another of whom is a complete and utter scumbag, and another of whom we'll later find out is sympathetic. And then we're introduced to the victim, who's either representative of innocence or the misguided youth of certain counter-cultures of the time (the latter playing into the cautionary tale aspect). What follows is bad editing, rough jump cuts, out-of-place comedic moments, rape, more rape, and the incorporation of the victims' parents into the plot somehow (which, in all fairness, goes back to a certain Ingmar Bergman movie).

The above paragraph can be applied to not only Wes Craven's LAST HOUSE ON THE LEFT, but any other post-LAST HOUSE abduction movie of the 70's. THE CANDY SNATCHERS features all of the above conventions, but it's still able to stand on its own two feet for a number of reasons. As much as I hate to admit it, for what it is and despite its many (MANY) flaws and quirks, THE CANDY SNATCHERS is incredibly well-structured for the simple fact that it makes some pretty unexpected twists and turns throughout.

In the film, three bumbling kidnappers, who seem to have no prior criminal experience, abduct some chick. Turns out her name is Candy (get it?) and her father is a high-end jewelry dealer. They want diamonds in exchange for the daughter. Pretty simple, but things don't exactly go as planned and everything spirals out of control. A number of factors come into play, namely the fact that Candy's father doesn't seem interested in playing ball with the kidnappers. Meanwhile, a mute little boy who looks like Bob from HOUSE BY THE CEMETERY with a mild case of Down's Syndrome is witnessing everything. The film occasionally takes the attention off the kidnapping storyline and focuses on the little boy's life at home, which basically consists of his mother saying some pretty mean-spirited shit and treating the kid like dirt. 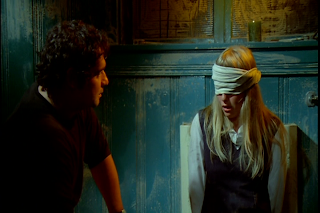 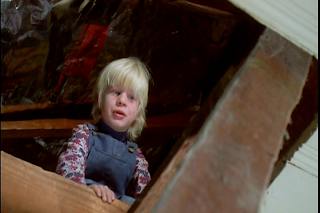 Not much more needs to be said about the plot. As much as I disliked the tone of the film and some of the technical aspects, like the awful music and the sloppy editing I mentioned earlier, I really have to give this movie props for how it sets everything up and ultimately ties up all of the loose ends in a conclusion that absolutely reeks of irony. There was also an unexpected amount of impressive stylistic choices, including a use of gelled lighting that reminded me particularly of the Argento-esque train sequences in NIGHT TRAIN MURDERS (another film inspired by LAST HOUSE, coincidentally), as well as a number of unusual camera shots throughout. 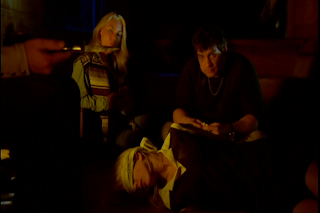 The main selling point for me with this film was Tiffany Bolling, who also starred in BONNIE'S KIDS the same year and plays one of the kidnappers in this particular film (I couldn't tell whether she was the loose cannon of the group, or the only one with any common sense, since she often went back and forth between the two). She's a stunning blonde-haired, blue-eyed woman with incredible facial features. I'll watch anything she's in at this point. Here, Bolling chews up the scenery with pretty much the rest of the cast, with the exception of maybe the actor who plays Eddy, the overweight and sympathetic kidnapper. The guy who plays the third kidnapper, Alan (also the brother of Bolling's character), looks and sounds almost exactly like David Spade. 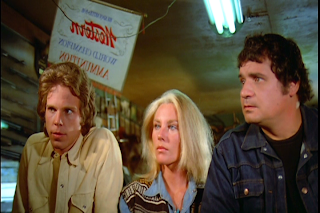 As a whole, THE CANDY SNATCHERS is not my cup of tea. I'm not a big LAST HOUSE ON THE LEFT fan in the first place, so I'm inherently not a fan of the films that draw inspiration from it. However, I do think it's fairly well done for what it is. Fans of dirty grindhouse cinema will (and probably do) enjoy it because of its unorthodox style and overall sleaze factor, and I feel comfortable recommending this film to casual fans of exploitation cinema and can be pretty sure that a majority of those people will get a decent viewing out of it. I for one stayed interested throughout because of the unexpected turns it took, and I found the plot twist to be quite clever.