Going back in time from my last review, THE NEW TALE OF ZATOICHI is the third film in the series, the first to be shot in color, and the earliest film in the series that I'll be reviewing. At this rate, I don't know how much more of these ZATOICHI reviews I have in me, because I'm slowly finding out that my level of interest and enjoyment is significantly lower than when I covered the LONE WOLF AND CUB films. But, we'll see how it goes. I certainly won't be going out of my way to cover all twenty-something of them, that's for sure.

NEW TALE is an almost plotless film that follows Zatoichi as he tries to put his troubled past as a degenerate gambler and killer behind him. And I don't mean plotless in the sense that it's a bad film or that it makes little sense, but the film is more of a quick glimpse into the nomadic lifestyle of the eponymous blind swordsman, and it's a film that basically gives you a better understanding of who he is as a character and the troubles he's faced with as a result of being handicapped. There's a big emphasis on not only the mystique of Zatoichi in this film, but also his loneliness and the fact that he's constantly on his own. It's actually quite sad, especially when you see the contrast of how genuinely pleasant Zatoichi is when in the company of people he trusts and how he subsequently deals with all of that being taken away from him in some form or another. 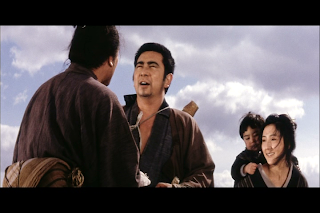 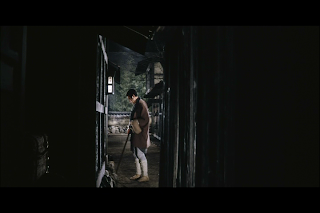 As I said in my introductory ZATOICHI review, 'Ichi may be blind, but he's far from handicapped. The fact that he survived long enough to appear in over twenty films proves that he's one hell of a swordsman and is more than capable of handling himself, but at the same time he's a very sympathetic character because of how he carries himself. For example, in this film he always tries to avoid confrontation and take the high road. Even when faced with impending danger, he does the cowardly thing by backing away and asking for mercy (pretty much a big no-no in feudal era Japan). But, as pretty much any genre film that focuses on a character with a sketchy past has proven, trouble always has a way of finding you. Such is the case with Zatoichi, who reluctantly has to resort to his old ways to stay alive. 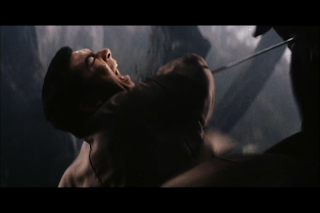 Like the last ZATOICHI film I watched and reviewed, this isn't the most action-packed samurai film I've ever seen, but what it lacks in excitement, it makes up for it with amazing visuals and solid acting (I have a feeling I'll be saying the same thing for every one of these movies from this point forward). Shintarô Katsu turns in a wonderful, emotional performance as Zatoichi. The film is slow and kinda boring, quite frankly, but at least this one's easier to follow in terms of plot and characters than CHEST OF GOLD, and it's also paced much better. Overall, a solid film but not as enjoyable as I'd hoped.