Presented in three sections, AMER tells the story of a woman named Ana, beginning with her childhood, transitioning to her teenage years, and culminating with her as an adult. There's really no narrative to speak of, and the dialogue is few and far between during the film's ninety-minute run-time. AMER is a film that thrives on atmosphere and is full of sexual symbolism, all while under the guise of an homage to Italian genre films from the 70's and 80's and the inspirational filmmakers who made them. That being said, attempting to make sense of the film or get some sort of entertainment value out of it would be missing the point. It is, after all, an art film. AMER is something you put on and surrender your senses to. If you're a fan of the Giallo genre, or Italian horror films like SUSPIRIA, the experience will be rewarding. Also, if you're even remotely interested in watching the movie, I'd suggest skipping this review.

The first section of the film focuses on Ana as a child and takes place in a rather large and inherently spooky house. Ana spends this section as an observer, arguably representative of the film's audience as she's exposed to a series of vague events involving her parents, who isolate themselves and behave secretively and suspiciously. A veiled ghostly figure who seems to only exist in Ana's imagination constantly emerges from various rooms in the house, apparently stalking the young girl. There's a fairytale-like atmosphere to this portion of the film as young Ana runs from room to room, observes the aforementioned veiled figure through peepholes, and eventually makes some discoveries that range from eerie to traumatizing. At a certain point, the decayed and muted browns make way for psychedelic cinematography and primary colors as the film transitions into a nightmarish world. It's this part of AMER that reeks of Argento. In fact, it's the closest I've ever seen a film come to replicating the look and atmosphere of SUSPIRIA. 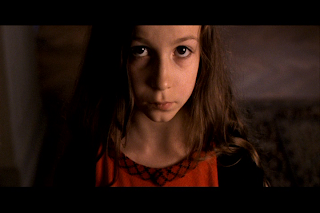 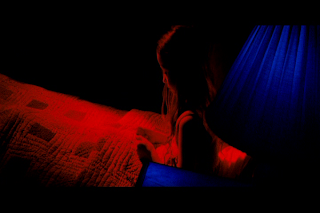 Judging by the way she's sexualized by the camera, when we eventually see the teenage Ana, it could be argued that we're introduced to her during the phase in her life when she transitions into womanhood and becomes aware of her sexuality. This is a very dreamlike part of the film, as opposed to the rather nightmarish opening. Not much to say about this particular section since it doesn't last very long and mostly consists of lots of close-up shots of eyes, awkward moments of silence and staredowns, and an overlong sequence in which Ana walks by a group of macho motorcyclists who are practically salivating at the sight of the young woman as her short skirt blows in the wind to reveal her panties. Noteworthy is the gorgeous outdoor scenery and the Morricone song used to open this segment. 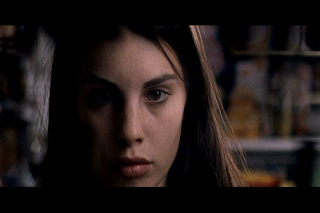 If the first part of the film was an ode to Argento's supernatural horror masterpiece and the second part was the filmmakers' take on stylized Italian romance films, the third is the full-blown tribute to Gialli. One of the recurring themes of AMER is sexuality and how it plays a part in Ana's life. As an adult, Ana doesn't come across as someone who's fulfilled her sexual needs, but rather someone who constantly fantasizes about intimacy because of her overwhelming desires that she doesn't act out for whatever reason. This part of the film begins with her getting picked up by a mysterious driver who takes her back to the home where she grew up (the same house from the first part of the film), which is now basically empty and even spookier than before. The house, by the way, is stunning, and one of the best examples of production value that I've seen in quite some time in a film. 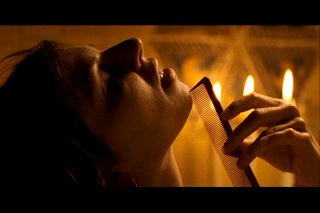 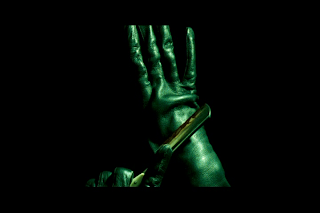 In what is easily the most blatantly symbolic scene of the film, Ana lies in a bathtub as she rubs a comb on her naked body, the sound of the comb's teeth loud as it moves across her skin. The tub slowly fills up (there's no running water, mind you). A mysterious figure with black leather gloves enters the scene and attempts to drown her, but Ana snaps out of her daze, escapes, and is subsequently pursued around the house by stereotypical Giallo antagonist, who later handles his straight-razor like an artist would a paint brush.

If you made it this far, regardless of if you've seen the movie or not, I'd recommend checking out the filmmakers' short films included on the Olive DVD release. They'll give you a better insight as to what themes the filmmakers like to play with, including split personalities and duality, which is something that may or may not come into play during AMER. Personally, I found the film as a whole to be slightly tedious, but as a fan of filmmakers like Argento, Fulci, and Bava, AMER was a very rewarding experience because of the numerous Easter eggs throughout that reference the aforementioned filmmakers - some subtle, some far too obvious. Visually, it's one of the most amazing movies I've seen in a while. I for one am very excited to see what the filmmaking duo of Hélène Cattet and Bruno Forzani come up with next.