A group of obnoxious drag racers in a small desert town terrorize everyone from motorists to pedestrians. Meanwhile, the sudden arrival of a suspicious young man (Charlie Sheen) coincides with the drag racers getting their comeuppance when they're preyed on by a mysterious figure in a souped-up Dodge Turbo Interceptor. THE WRAITH combines the slasher film with the supernatural killer car theme (see: THE CAR), but reverses them so that a group of antagonists are being stalked by a murderous anti-hero - in this case a seemingly alien being who uses drag racing to lure in its prey and ultimately use its car as a weapon - instead of the other way around. Aside from the slasher and killer car elements, THE WRAITH is reminiscent of 70's Carsploitation films with its numerous scenes of machine worship and automobiles being fetishized. On top of that, there's a romance sub-plot (and twist) for the ladies, and the film bursts at the seems with 80's pop culture, including a soundtrack with tunes from the likes of Billy Idol, Ozzy Osbourne, and Huey Lewis. 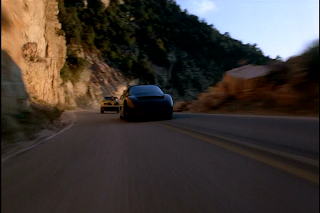 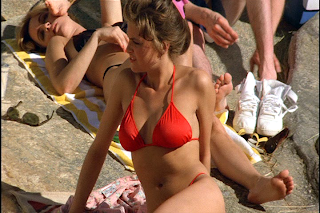 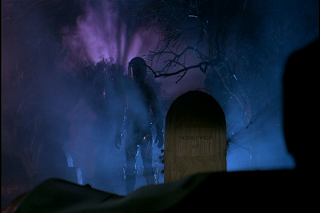 The antagonists in THE WRAITH are colorful, but would you expect anything less from a late 80's film? Leading the group of hyenas is Packard Walsh, the obsessed, possessive and abusive non-boyfriend of Sherilyn Fenn's character. Speaking of Packard, he has impeccable jealous boyfriend radar; every time Fenn even so much as looks at another guy, you literally hear tires screeching in the distance, signifying that cock-blocker extraordinaire Packard Walsh is on the scene. Clint Howard plays Rughead, the mechanic of the group, whose Bride of Frankenstein-ish hair gives the appearance that he stuck a fork in a light socket one too many times. Aside from a couple of other supporting goon characters, the group of antagonists are rounded out by the undisputed show-stealers: the inseparable odd couple of Skank and Gutterboy. Skank (David Sherrill) is a stereotypical 80's punk who drinks hydraulic fluid ("I'm tweakin', dude!"), and Gutterboy (Jamie Bozian) is his dim-witted sidekick who always looks like he just did a faceplant into a pile of manure. (I recently reached out to David Sherrill regarding an interview. Response pending.) 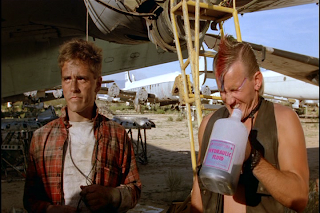 Skank and Gutterboy should've had their own movie, goddamnit.

Flawed? Sure. Randy Quaid really stinks up the film whenever he's on screen, thanks to his scenery-chewing and ongoing John Wayne impression. The ending is anti-climactic and the plot is inherently predictable. But who fucking cares?! I may be a little biased towards the film and blinded to some of its flaws because of my nostalgic attachment to it, but, at the risk of sounding hyperbolic, THE WRAITH is gold for anyone who likes the garish aesthetic of 80's cinema, and anyone who has a fondness for the 80's in general. Whenever I watch this film, I desperately wanna go back and experience the 80's as a young adult (I was only five when this movie came out), despite most of the people from that generation claiming that it was an awful decade and not as "cool" as it looks. Besides that, some of the race scenes are impressive (as well they should be, seeing as one of them in particular proved to be fatal for a second unit camera man), the dialogue is ridiculously quotable, and the 80's rock soundtrack adds a nice kick to the proceedings, not to mention the fact that Sherilyn Fenn (an occasionally rollerskating Sherilyn Fenn, no less) is absolutely adorbs in this.