Originally billed as a sequel to THE DEER HUNTER overseas (really?), THE LAST HUNTER is an Italian-produced Vietnam film that was shot in the Philippines by director Antonio Margheriti and a minimal crew. David Warbeck (THE BEYOND) plays Captain Henry Morris, who's on a mission to take out a radio tower deep in the jungles and stop the broadcasting of anti-war propaganda. Morris and his crew of ragtag soldiers, along with a female journalist named Jane Foster (Tisa Farrow), trek through the jungles of Vietnam and encounter enemies and a group of American soldiers who are holed up in a cave that just so happens to have a full bar! It's a typical Vietnam movie in terms of the conventions and set-pieces, but with bizarre parallels to WIZARD OF OZ and a great score that wouldn't feel out of place in an Italian zombie movie. 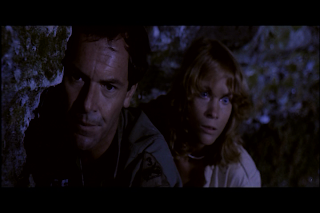 As if it weren't clear enough by what I mentioned earlier, this film was indeed made to cash in on the success of THE DEER HUNTER and, more specifically, APOCALYPSE NOW. Antonio Margheriti even went out of his way to shoot in the same locations as Coppola's Vietnam classic, so if a lot of the scenery looks familiar to you, it's no accident. Speaking of which, regardless of Margheriti literally trying to follow in the footsteps of Francis Ford Coppola, the locations he shot the film in are pretty amazing. Say what you want about this movie, but you can't deny the excellent production value. Keeping in mind the small crew and minimal amount of equipment Margheriti utilized while making this film, I'd go so far as to call it a huge achievement for the director. 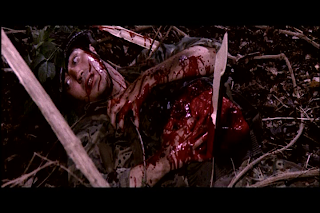 There's not a whole lot else to say about this movie other than it contains a vast amount of Fulci-esque gore, which caused it to be outright banned in some countries. Speaking of which, I coulda swore that this was on the Video Nasties list, but I guess I was wrong. Judging by how violent it is, I'm actually quite shocked it didn't get banned in the UK. Speaking of Video Nasties, actress Margit Evelyn Newton, who appeared in Bruno Mattei's infamous HELL OF THE LIVING DEAD, has a small role in this film. Other noteworthy cast members include Bobby Rhodes who played the pimp and personal trainer in Lamberto Bava's DEMONS and its sequel, respectively, and John Steiner, who played an important role in Argento's TENEBRAE.

Despite THE LAST HUNTER being kinda boring, I quite enjoyed it for its atmosphere, which is partly due to Franco Micalizzi's occasionally eerie score and the film's slight otherworldly feel. Like WIZARD OF OZ, which I mentioned earlier, Warbeck's character, his platoon, and the female journalist are comparable Dorothy, her dog, and her heartless, courage-less, and brain-less cohorts. The unveiling of the mysterious propaganda-spewing woman at the end of the film is similar to the reveal of the Wizard. I'm sure comparing a Margheriti-directed exploitation movie to an American classic sounds very pretentious, but the similarities are there. I also compared ESCAPE FROM NEW YORK to the same film when I reviewed it back in the day, but I think it's less of a stretch in this case. Keep in mind, however, that I'm not praising the film. My reaction to the film has more to do with the fact that it's not what I expected. It's still boring, and in general it's not a pleasant film to watch.