The year: 2010. Due to a rising crime rate and a desire to separate the haves from the have-nots, the ghettos and projects have been isolated by giant walls and borders. When a government vehicle is hijacked and a bomb is stolen and accidentally armed by thugs from the Barrio 13 district, a supercop named Damien is given 24 hours to infiltrate the ghetto and disarm the bomb before it decimates the entire city. He's given an escort in the form of Leïto - a resident of Barrio 13 who was imprisoned for killing a corrupt cop six months earlier. As it turns out, Leïto has ulterior motives and wants to rescue his little sister, Lola (Dany Verissimo), from the clutches of a drug kingpin. Damien and Leïto reluctantly compromise in order to race against time and kill two birds with one stone, but will their insane parkour skills be enough to take on an army of gun-slinging gangsters?

DISTRICT B13 is well known for being an insane, action-packed French genre film full of dangerous-looking stuntwork. Actor David Belle didn't really have any significant acting experience prior to making this and was cast in the film based on his impressive parkour skills and his ability to climb walls and maneuver his way through obstacles like a monkey. Director Pierre Morel and co-star/stunt coordinator Cyril Raffaeli certainly exploit Belle's natural athleticism here, but it works in the context of the tone of the film and never feels like they're just throwing in a bunch of random action set-pieces for the sake of it. Raffaeli is no slouch either, and in fact he's involved in some of the film's more impressive stunt sequences. 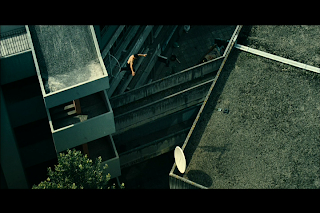 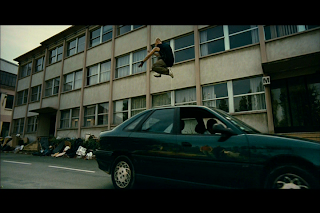 Substance-wise, aside from some political and social commentary, DISTRICT B13 is a fairly conventional action film and pretty average in terms of story. Personally, I'm a fan of action films that use detonated bombs and explosives as plot points despite them being a cheap way of creating suspense. The race against time aspect works in most cases and it's effectively used in this particular film; the addition of a damsel in distress is a nice touch because it adds a little something extra. When it comes to films like this, some would argue that a lackluster story can be overlooked just as long as the films are enjoyable and deliver the action. Fortunately, DISTRICT B13 has a decent story AND it's fun, but it's still a showcase for insane stunts above all else.

To me, the best things about DISTRICT B13 - even more so than the memorable stunts - are the people in it. The chemistry between the two leads is amazing, and the villains are great despite them being caricatures and stereotypes (especially the Carlos Montoya character, who rocks a skullet like nobody's business). Dany Verissimo, who plays the damsel in distress, is absolutely magnetic when she's on screen. The flawed lead villain, Taha Ben-Mahmoud, has some hilarious character traits, like the fact that he always looks like he just took a nap on a pile of cocaine. 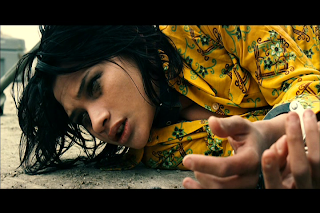 DISTRICT B13 is easily one of the best examples of the hyperstylized genre film that the French do so well. For the sake of comparison, it's like a Neveldine and Taylor film, except a lot more focused, not as assaulting, and without all of the vulgarity. Extremely fun and highly recommended. Also, if you like gunplay you'll love this film - it has more scenes of people pointing guns at each other than anything I've seen in a long time. 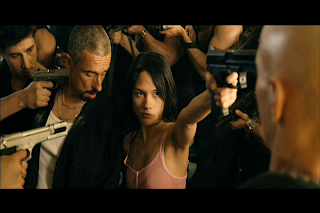 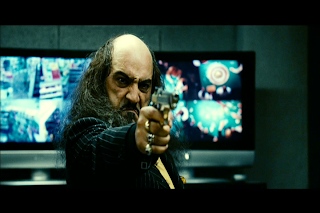