Picked by Hans A.

I have a history with Nicolas Winding Refn's Viking film VALHALLA RISING. I first saw it last year, or maybe the year before that, and fucking hated it. Having only seen BRONSON at the time when it came to Refn's filmography, I had some expectations going into this film that were simply not met. With BRONSON, Refn did some interesting things cinematically with what could have been a standard but violent biopic about England's most dangerous prisoner, so I expected a lot more from VALHALLA RISING than what I ultimately got from it, which was a slow, boring, and incredibly pretentious film that said absolutely nothing. Since then, though, I've seen most of Refn's filmography and have a much better understanding of him as a director. But does it make VALHALLA RISING any less boring? We shall see. 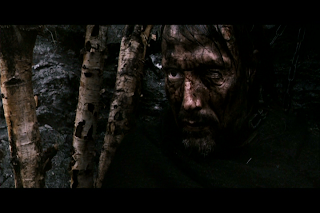 VALHALLA RISING is split up into six chapters and tells the story of a mute, one-eyed Viking warrior and his adolescent companion who join a group of Christians as they embark on a crusade to Jerusalem to "reclaim the holy land". The film takes place in or around 1000 AD, which was a crucial time in Viking history - a time when Christianity was introduced to and subsequently practiced by Scandinavians who, up to that point, practiced a polytheistic religion and worshiped numerous Gods. According to Viking history, the transition to Christianity was a smooth one for the most part, but there were still a few hardcore Vikings who refused to embrace Christianity, which is something that we see in this film. 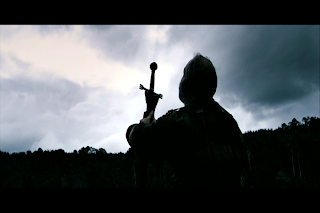 When the movie opens, "One-Eye" is being led around in chains and kept in a cage by fellow Vikings who, for money, force him to fight other people who appear to be slaves to the death. It's established that One-Eye's captors are stubborn Vikings who refuse to convert to Christianity. It's not long before One-Eye turns on his captors and ventures out into the mountainous terrains with a young boy he befriends. They eventually meet up with the aforementioned group of Christian crusaders who offer to treat One-Eye as an equal, just as long as he stands by their side and does battle with anyone who prevents them from reaching their destination. Things take a surreal and slightly supernatural turn when their boat becomes surrounded by a mist that disorients them and compromises their sense of direction, only for them to suddenly end up in a seemingly deserted land that's suggested to be Hell. 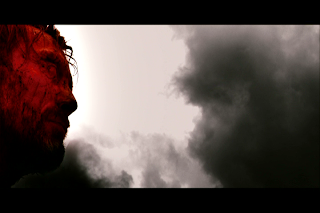 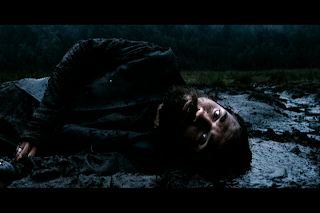 Seeing VALHALLA RISING now is a much more interesting and satisfying experience than when I originally saw it, and this is entirely because I'm much more aware of Refn's films and his style as a filmmaker. Is it still boring? Yes. Is it still a little too self-important and pretentious? Yes. But I'm able to overlook those things a little bit more now and accept the film for what it is instead of worrying about expectations, and it's because of my knowledge that Refn is a different sort of filmmaker who sticks to his guns and has a tendency to tell stories in a non-traditional manner. You see, VALHALLA RISING is not the most exciting movie out there, but it's absolutely phenomenal as a cinematic experience. The sound and the stunning visuals compensate for the lack of dialogue and seamlessly blend together to create a thick atmosphere. The unconventional and occasional harsh score is comprised of ambient sounds, sporadic trumpet blasts, and jarring "noise" compositions that really drive the point home of VALHALLA RISING not being your typical "adventure" movie. 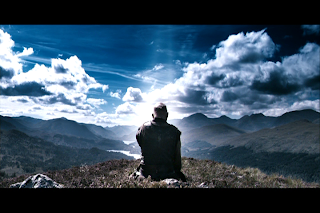 VALHALLA RISING also says some interesting things about religion and how it was perceived during such a primitive time as the turn of the 11th century. Without getting into detail, there's a moment in the film where one of the crusaders is blinded by his faith and what he interprets "serving God" to be, while one of his allies stands up to him, not so much questioning his beliefs, but questioning his logic and the arguably dangerous manner in which he uses his faith in God. The film certainly addresses religion, but it does so in a neutral manner that doesn't come as the filmmaker trying to make a statement.

Again, this is a slow and quiet film with minimal dialogue and static shots that seem to linger for a tad too long, and it's also a film that can be quite deceiving (which I found out the hard way when I first watched it), but if you're willing to simply watch it in the right setting and surrender to the power of cinema for ninety minutes, VALHALLA RISING is a fascinating watch. It's also a good thing that the film is split up into chapters, because they give the viewer some time to breathe and gather themselves after watching - in some cases - exhausting sequences of not a whole lot happening. The chapters also allow the viewer to take the film in small doses if need be, but considering it's only ninety minutes and not some two-plus-hour epic, it's not that tedious of an experience.