I would say "it's good to be back" after taking a few weeks off, but I'm not entirely back just yet. We've sort of come full circle here with this 13 Questions segment seeing as Dynamo Marz of The Deadites was the very first person to participate a few months ago. Since then, he's launched a podcast under the Deadites umbrella called Trick or Treat Radio, and joining us this week is his co-host, collaborator, and co-conspirator Johnny Wolfenstein. Once you get to know Mr. Wolfenstein, please check out the links below! 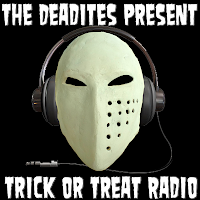 1. Who are you and where are you from?
I am Johnny Wolfenstein and I hail from Necronomicon, MA

2. Where might people know you from?
I am the producer of media for the world's finest monster hunting, keyboard slinging, candy eating, electronic band, The Deadites. People also may have seen me on The Deadites' video podcast, The Cryptocast where I make an occasional appearance in front of the camera, but I also direct/edit/produce it. We just started up a brand new endeavor, an Audio Podcast known as Trick or Treat Radio where I co-host and produce.

3. When it comes to what you do, who or what are your major influences?
Horror movies, professional wrestling, music, and comic books. If I were to name an actual person, it would be Wiggly, who is a pioneer of podcasting and has been a huge inspiration to me. He and I have become friends over the years and I'm glad to know such a talented, interesting dude. If you don't know him, look him up. Some of the podcasts he's done over the years include: Magic Milkshake Machine, We Talk Games, A Wiggly World, CHIKARA's Podcast-A-Go-Go. 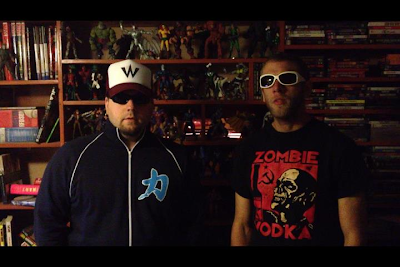 Johnny Wolfenstein (left) on the set of the Cryptocast
4. What four peoples' faces would you put on your own personal Mt. Rushmore?
Devin Townsend, MC Bat Commander, Belial (from Basket Case), and El Santo

5. What's the last album you bought?
I hope the feds don't read this blog, because I rarely buy albums these days, instead, I have means to which I acquire my music. Having said that, I did just pre-order Devin Townsend's upcoming release, Epicloud. I kind of fibbed there folks, I do support the artists that I truly love and want to see continue to put out albums.

6. What are the last movies you saw in theaters and on DVD/Blu-Ray?
I most recently saw The Dark Knight Rises in the theater and at home I just watched The Raid: Redemption. I cannot recommend them enough. Loved both films immensely. 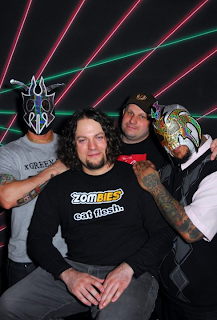 Johnny Wolfenstein and Dynamo Marz with CHIKARA stars Ultramantis Black and Crossbones
7. What's the last podcast you listened to?
Wow, I sound like an asshole but it was my own, Trick or Treat Radio. I always listen to them the day after I edit them to make sure I didn't miss any egregious errors or leave too much silence between conversations and kicking myself for every "ummm" or "ahhh" that I say between thoughts. Aside from my own, I've been listening to a mish-mosh of other Podcasts to hear what others are doing and see how we stack up. Some of my favorites are: Grizzly Bear Egg Cafe, The Art of Wrestling and A Wiggly World. 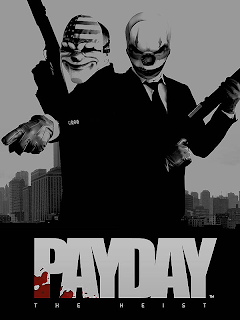 8. What's the last video game you played?
I recently acquired Lollipop Chainsaw, but have yet to play it. I hope to get some time this weekend. Other than that I play quite a few video games. Lately I've been playing Payday: The Heist (so I can rob banks and not actually get in trouble), Hero Academy (Even though I suck, I love playing asynchronous strategy games like that), and Borderlands (to finish all the DLC, in anticipation of Borderlands 2)

9. What's the last book you read?
I don't have time for novels these days, but Comic Books suit my lifestyle much better, so I read a ton of those. I recently read: Before Watchmen: Ozymandias #2, Aquaman #11, Shade #10, Swamp Thing #11 and Animal Man #11.

10. What are your favorite sports teams?
While I secretly love the Rudos, I'll proclaim my allegiance to the Tecnicos.

11. What cartoon or comic book character can you relate to the most?
Probably Spider Jerusalem from the Comic Book Transmetropolitan. Mostly because I really want to carry around a bowel disruptor gun and have a cat with two heads that smokes cigarettes. 12. Create a playlist of ten songs that give people an idea of your musical taste.
This is a tough one, but here goes:

13. If you could spend the day at an amusement park with one person from the entertainment industry, who would it be and why?
Ric Flair because I'm sure that man has a million and one stories to tell, it would make the long lines much more bearable. And I sort of want to say that I rode Space Mountain WITH Ric Flair.