Being a huge fan of both Mario Bava and Gialli, I'm surprised it took me as long as it did to finally see BLOOD AND BLACK LACE, which is regarded by fans of the genre as the first true Giallo and a film that inherently inspired many slasher movies for years to come. While certain proto-slashers and the German Krimi may have been an influence on this film, it was BLOOD AND BLACK LACE that introduced a few conventions to the genre, as well as the standard Giallo slasher attire to Italian cinema: black fedora, mask, black trench coat, black gloves. And, because of Bava's fondness for flamboyant camera work and interesting uses of color, the entire aesthetic of this particular film became the blueprint for many others of its ilk and his style was an influence on some of the more noteworthy filmmakers of the genre, like Dario Argento and Sergio Martino to name a few. 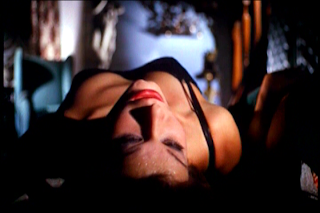 Set mostly in a "fashion house", BLOOD AND BLACK LACE features a trend and convention that would be used in damn near every Giallo ever made: the lives of fashionable upper-class yuppies being infiltrated by a murderous entity. Paranoia and panic ensues when a gorgeous model is found dead after being strangled by a masked man. An Inspector comes into the picture and the film is then established as a whodunit of sorts. As a number of the victim's peers struggle to make sense of the situation, the killer occasionally springs out from the shadows to claim another victim and do whatever's necessary to seemingly obtain a diary that contains incriminating information. 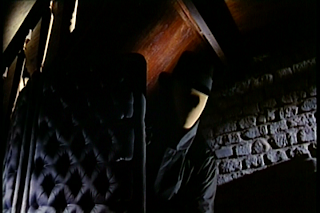 One of my initial observations of this film was that there are a lot of characters. As a murder mystery, there are a lot of possible suspects to choose from, which always keeps things interesting. I, however, am personally not a fan of murder mysteries with too many characters who are there for the sake of confusing the viewer, because the inevitable reveal usually ends up being disappointing. Too many characters for the sake of a high body count, though - that's another story. Since I don't like to spoil movies, I obviously won't talk about the manner in which all of the characters here were used, but I will say that the body count is decent - not in terms of a large number, but because of the style of murders and the intensity of the death scenes, which, in hindsight, were fairly shocking for the time period that BLOOD AND BLACK LACE came out. While the straight-razor has since gone on to be the most recognizable weapon of choice for antagonists in Gialli, the killer in this film utilizes methods of murder and torture that are interesting. 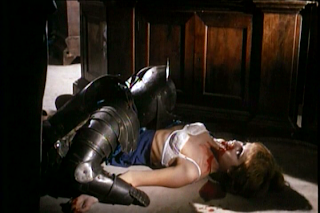 The main thing worth noting about this film are the visuals, which shouldn't come as a surprise to anyone familiar with the work of Bava, regardless of whether you've seen this movie or not. Bava, as a visual artist, was probably at his most impressive in the 60's, and BLOOD AND BLACK LACE features the vast color palette that he was fond of at the time. Outdoor nighttime scenes highlighted with theatrical blue and green lighting, muted colors juxtaposed with bright reds, so on and so forth. The most impressive visual sequence, in my opinion, occurs when a certain female victim is being chased through a house by the killer. The house is mostly dark with the exception of unnatural, artificial lighting. Of all the colors that Bava could have used, he chose pink, purple, and green for this particular set-piece, and it works very well. Another great thing about this sequence is how Bava successfully maneuvers the camera through each room and around the house as the woman is being stalked. Wild stuff, I tell ya. 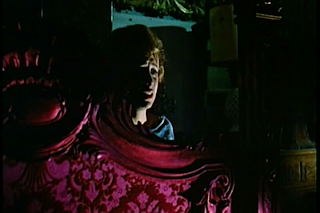 As some of you may know, it wouldn't be a proper review on The Death Rattle if I didn't complain about something. Sorry, but that's just how it is, and sometimes when I point out what I feel is a problem with a movie, it doesn't mean that I go out of my way to dislike a film or that I'm trying to steer people away from seeing it. I absorb movies a certain way, I make observations and I write about them. That being said, I had a real issue with the dialogue towards the back end of the film. I'd even go so far as to say that the writing is atrocious in the final act. I won't get into details, but there's an info-dumpy exchange of dialogue that goes on for way too long and explains way too much. It's really bad, no matter which language you're watching it in. Speaking of which, it's also worth noting that the dubbing on this release is unbearable to listen to. Another "dislike" would be the score (Jazz gives me a headache), but I guess that's more of a product of the time than anything.

The bottom line is that BLOOD AND BLACK LACE is a very important film that helped shape an entire genre that, in turn, went on to help shape the slasher genre as we know it today. The evolution of the slasher goes back farther than this particular movie, but it's not to discredit the contributions that Bava made with BLOOD AND BLACK LACE. Aside from the dialogue and the extended reveal in the back end, this film doesn't overstay its welcome and there's so much replay value here for enthusiasts and students of the genre. If I were to rate this movie based on the enjoyment I got out of it and compared to other films by Bava and of the Giallo genre, I'd score it a little lower, but considering the impact it made and especially the period of time when it came out, I had to be a little more forgiving.