John Murdoch awakens in a bathtub in an apartment he's not familiar with, with no recollection of how he got there. There's a slain woman in the room and a murder weapon. Next thing you know, he's being pursued by vampiric men in black hats and trenchcoats, as well as an Inspector who ends up on the case of the dead woman. John is occasionally contacted by the creepy Dr. Screber, who lurks in the shadows and acts as an exposition machine. Clues lead John back to his home, where he meets his concerned wife Emma, but he has no idea who she is. Has he suddenly been thrust into a false life as part of a cruel experiment? Or, was he simply framed for a murder by people who wiped his memory? 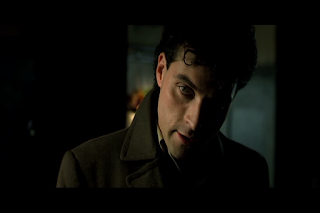 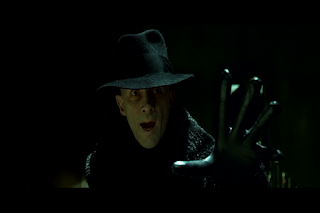 DARK CITY is directed by Australian filmmaker Alex Proyas, who also made THE CROW (one of my favorites) and I, ROBOT (not one of my favorites), and it's a neo-noir set in a futuristic industrial wasteland of sorts. As the movie progresses, there's mentions of "tuning", "imprinting", and other things having to do with mind control, psychic powers, telekinesis, so on and so forth. Truth be told, I had no idea what was going on for a majority of the film. DARK CITY gets into some INCEPTION type shit, except it deals with memories and time as opposed to dreams. The concept is interesting but convoluted. The aforementioned men in black, in a way, control things from their underground lair, where they wear black leather get-ups and finish each other's sentences like the Cenobites from HELLRAISER. 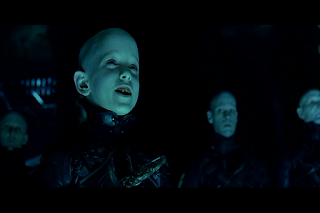 Visually, DARK CITY is very impressive, especially for a movie that was made in the late 90's. The special effects, for the most part, aren't particularly dated and are actually on par with some modern special effects. They also go for some interesting visual sequences here, with buildings rising up from the ground and layouts of interiors suddenly changing right before your very eyes. Another cool visual element of the film are the actual men in black and their underground habitat. While the characters themselves aren't super interesting, they look cool and appear to exist in the same world as CITY OF LOST CHILDREN or another movie of the sort. The most impressive visuals, perhaps, are Melissa George's breasts and Jennifer Connelly's face. Duh. 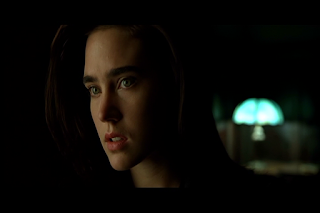 Ultimately, there were two things that kinda killed this movie for me, or at least kept it from living up to the great concept and visuals, and that would be the acting and the music. Rufus Sewell is someone who I'm normally indifferent towards, but I just do not like him in this film. He plays a man with a lot of odds stacked against him and someone we're supposed to root for, but something about Sewell kept me personally from being able to invest in the character the way that I was supposed to. In other words, maybe he wasn't the right choice to play the leading man? On a side note, one of the writers, on the DVD commentary track, totally dissed Jennifer Connelly as an actress. It's arguable that she could have been cast in the film because, at the time, she had that "classic" look that would make her right at home in a neo-noir, but I thought she was fine in this. Of course I could just be biased since I'm madly in love with the Jennifer Connelly of this time period, but whatever. As for the music, it was composed by Trevor Jones, and it's one of those "big" heavy-handed scores that becomes extremely annoying, repetitive, and almost unbearable after a while. I would've been much happier had Trevor just recycled the music from LABYRINTH for this - even the David Bowie numbers. Why not.

I'm not sure if others feel this way, but DARK CITY felt, to me, like a dark, futuristic version of THE TRUMAN SHOW, except if the people running the show actually physically intervened and if the lead character was being pursued by dangerous, shadowy figures. Overall, cool concept, fantastic visuals and special effects, but it didn't really do much for me otherwise.