After the events of THE ABOMINABLE DR. PHIBES, which saw the diabolical Phibes and his trustworthy assistant Vulnavia go down in a blaze of glory, DR. PHIBES RISES AGAIN sees the duo rising from the wreckage after a three-year hibernation thanks to some sort of significance in the lunar cycle. Whereas Phibes was motivated by vengeance in the original film, his goal this time around is to resurrect his wife Victoria (Caroline Munro), so naturally he and the ethereal Vulnavia travel to Egypt to make it a reality. 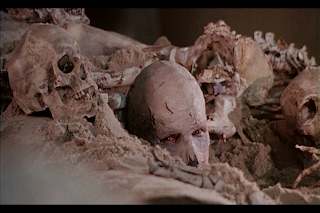 Turns out an ambitious explorer named Biederbeck stole something that belonged to Phibes as he lay dormant following the disastrous events of the first film, and it's this particular item that Phibes needs to bring his bride back from the dead. The item is apparently a key to achieving immortality or something along those lines, which would probably explain the mystic origins of Phibes and the mysterious Vulnavia. Biederbeck has his own agenda, though, and it has to do with an Egyptian tomb and a hidden River of Life, hence why Phibes has to travel all the way to Egypt to track down the dastardly Biederbeck.

DR. PHIBES RISES AGAIN was apparently rushed into production following the success of the original, and it was supposedly given less of a budget as a result. That said, this particular film is somewhat reflective of a rushed production. Whereas the first one was extravagant and spectacular, this one is stripped down to the bare essentials in a lot of ways, but it's not to say that this sequel doesn't have that same weird atmosphere as its predecessor. The only difference that kinda bothered me personally is the absence of Virginia North as Vulnavia. As evident by the gushing in my review of ABOMINABLE DR. PHIBES, I adored both the character Vulnavia and the actress Virginia North, who couldn't reprise her role due to being pregnant. There was something so indescribably angelic and graceful about her, which is something I can't say about Vulnavia this time around. It's not to say that Australian actress Valli Kemp did a bad job, though; she's equally as gorgeous, but her approach to playing the role seemed a tad different and thus her chemistry with Vincent Price was lacking. But who knows, it could've just been due to the hurried production. 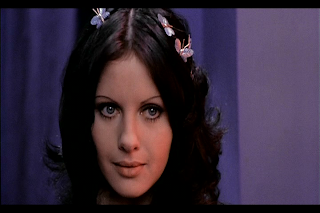 I hate to keep referencing the original, but I feel like I sort of have to. It's almost impossible to review this is a standalone film and judge it on its own merits. Same director, same cast, same lead characters, same expectations. Prior to watching ABOMINABLE DR. PHIBES, I've heard it referred to as campy, which is accurate to a degree, but the tragic background of Dr. Phibes makes the camp easy to overlook. For what it's worth, I can't say the same thing about this film, which isn't necessarily a bad thing. The camp in DR. PHIBES RISES AGAIN is right at the forefront in a lot of ways, which is inherent considering the revenge angle is replaced with one that could be described as Frankensteinean. The fact that Phibes not only brings his entire band of Automaton musicians to Egypt but manages to rebuild his elaborate ballroom inside of a pyramid speaks volumes about the levels of absurdity in this sequel. 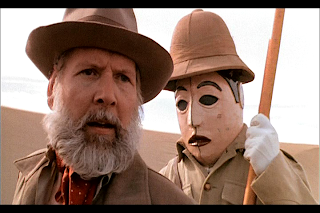 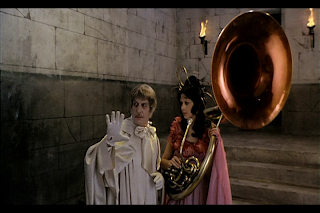 Vincent Price is great as usual, but the mystique and tragedy of his character is almost completely missing in DR. PHIBES RISES AGAIN. He's a lot more exposed and talkative, and most of the time I have no idea what he's talking about. To say that he babbles a lot would be an understatement. I also think it's safe to say that he's more of a heel in this one. 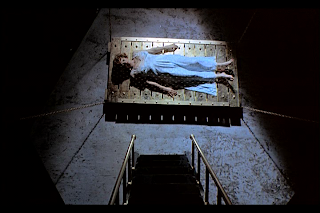 Ultimately, DR. PHIBES is a step down all across the board in comparison to its predecessor, but, to be fair, that's a hard film to follow. As I already mentioned, this was essentially made to capitalize on the success of the original, so the sincerity won't be as evident. This is a more of a straight-forward campy horror-comedy; it's not as engaging and dazzling, but the beautiful cinematography is still accounted for, as are the elaborate set-pieces. The Ancient Egyptian imagery is noteworthy, and I admire how Phibes uses Egyptian iconography and themes when killing people in this. The final set-piece is a SAW-like trap where someone has to race against time to save someone. Overall, not nearly as good as ABOMINABLE DR. PHIBES, but not much British horror of this era is.