Not since catching Gaspar Noe's ENTER THE VOID in the tail end of 2010 has a movie left me as up in the air and confused as BELLFLOWER. Like VOID, I wasn't sure whether I liked BELLFLOWER or hated it by the time it was over, and I'm still not sure if I like or hate it. One thing that I can say about it, though, is that it left an impression on me. That's not necessarily a good thing, but it's not a bad thing either. Like I said, I'm torn on this one, but I got enough out of it to give what I feel is a fair review.

Woodrow and Aiden are two grown-ass men and life-long best friends who are obsessed with the fictional character Lord Humungus (the iconic homoerotic villain from the second MAD MAX film) and the post-apocalypse; not the genre of film made infamous by Italian filmmakers in the 70's, mind you, but the actual aftermath of the inevitable doomsday. If you haven't seen this bizarre indie film yet, I'm sure there are images of two militant skinheads holed up in a garage swirling around in your head, but it's not the case with the two clowns in BELLFLOWER. Rather than angry people-haters, Woodrow and Aiden are two Southern Cali hipsters, and they seem to be fascinated with the aesthetic of the post-apocalypse rather than two people who long for the violent end of humanity. 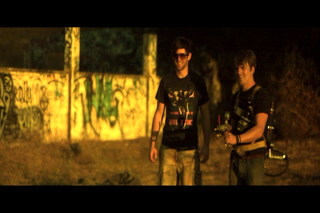 When I said these guys take their love of the MAD MAX movies and their doomsday obsession to a new level, I meant it. They go so far as to construct two important things that will accompany them when the world ends and they "rule the wastelands": a home-made flamethrower and a rather impressive heavily-modified '72 Buick Skylark that they name "Medusa". Now, one of the many strange things about BELLFLOWER is that it takes all of those things and presents them as seriously as possible. In other words, it's not a quirky comedy about two friends who have a playful fascination with a couple of Australian action movies; Woodrow and Aiden are absolutely convinced that they'll survive the apocalypse and lead a gang known as Mother Medusa as they drive around in their super-duper car and regulate the law of the land with their flamethrower. 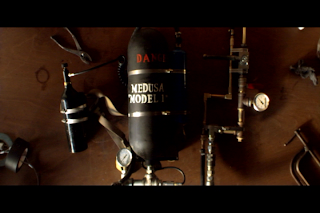 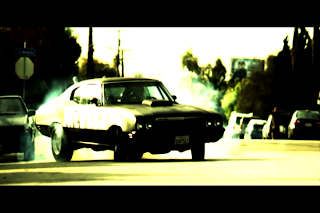 Early in the movie, Woodrow falls in love with a chick named Milly as the two of them compete in a cricket-eating contest. Still with me? The two quickly run off together and drive all the way to Texas just so Milly can eat in shittiest restaurant they can find. On a whim, they trade in Woodrow's car for a motorcycle and drive it all the way back to Cali. How RANDOM of them! BELLFLOWER then basically becomes a love story set against the backdrop of a couple of delusional friends preparing for the end of the world. Things go sour between Woodrow and Milly, however, for reasons that I needn't necessarily mention, and a whole bunch of drama ensues involving the two former love-birds and the people that surround them. 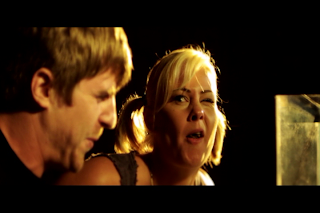 BELLFLOWER has been met with mixed reviews since it debuted at Sundance in January of 2011, and even more so since its gotten a wide release. I know a lot of people who absolutely hate it, and... well, I personally can't think of anyone who actually likes it, but judging by its current rating on the internet movie database, it appears that there are indeed people out there who are fond of this film. As for me, well, I already brought up the fact that I'm up in the air on this one, but now I'll actually explain why.

It should be said that BELLFLOWER is a gorgeous film. Standard camera work and cinematography, but the filmmakers seemingly went out of their way to pretty it up in post-production. At the end of the day, though, it's lipstick on a pig. As it is, BELLFLOWER is a film with an interesting and refreshing concept, great visuals, and obnoxious characters. If you take the visuals out of the equation, it would then be a bland, amateurish film with an interesting concept and obnoxious characters. I'm no Roger Ebert, but, in my opinion, if anyone out there is to properly critique this film, they need to focus on its core and not the extra shit that writer/director/actor Evan Glodell felt the need to throw against the wall. That being said, without the visuals and without the unwarranted post-apocalypse backdrop, what you'd have is a basic mumblecore movie about a relationship that goes awry. REALLY awry. On the other hand, if you were to look at this movie for what it is, compare it to movies within its genre, and take into account that it's an independently-produced film that was made for seventeen-thousand dollars, you'd come out of it having watched a very ambitious and stylish piece of work that comes across as a labor of love (or, to be fair, a vanity project) for Glodell.

See why I'm so undecided about this movie? 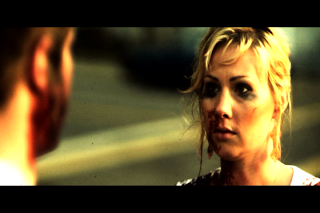 I have no reason to bash this movie, nor do I have any reason to defend it. I understand why BELLFLOWER would upset people, and, quite frankly, I've soured on the film quite a bit after a friend of mine told me that he was disrespected by the hipster too-cool-for-school filmmakers when he attempted to interview them at Sundance, but I personally appreciate BELLFLOWER for what it is. If I do have a major complaint, it's that the film is way too fucking long. It only clocks in at about a hundred minutes, but it feels much longer than it really is. And yes, pretty much everyone in the movie is annoying, especially the whiny lead character Woodrow. In the end, BELLFLOWER won't make any lists of my personal favorites, but it's certainly one of the weirdest films I've seen in a long time.