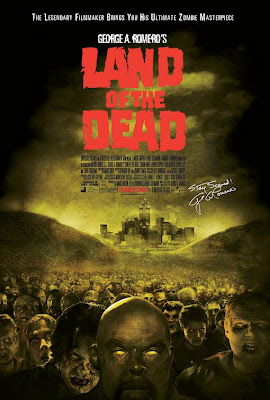 #12 LAND OF THE DEAD (2005) - The fourth movie in Romero's series of Living Dead films, LAND OF THE DEAD, to some, is considered to be the last thing George Romero made that was worth a shit. It really is something special - Romero with what I believe was the biggest budget of his career and the freedom to make the zombie movie that he wants to make, and without some studio breathing down his neck (well, not too much, anyway). And make that movie, he did. LAND OF THE DEAD has generally gotten a lot of good reviews since its release, and I've even heard some horror fans make the bold statement of it being the best of Romero's zombie films, but I have to say that I'm actually not a big fan of this movie. Well, I like it, but I don't love it. It's generally fast paced and has the feel of an Action Movie more so than a horror, and there's a great social commentary on poverty and the Iraq war. It's a story about the haves and the have-nots and zombies. The annoying characters, however, and the movie's many failed attempts at trying to be humorous keep this from being higher on my list. 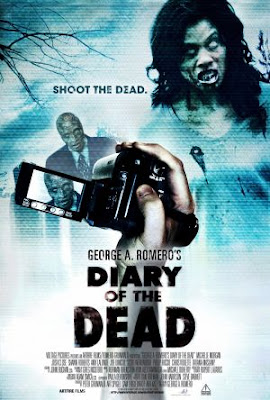 #13 DIARY OF THE DEAD (2007) - It's the zombie apocalypse as captured by a bunch of film students (and uploaded to MySpace and YouTube). I really like Romero's commentary here. There's the whole thing with the media manipulating and blowing things out of proportion, which is true. It's all about fear. Society needs something to be afraid of in order to distract them from their own problems. And there's the whole thing about society's reliance on technology, which is also true. If the internet were to suddenly cease, almost every business in the world wouldn't be able to function. But what would you do if any access to the internet whatsoever disappeared? A great band once said: Give me convenience or give me death. DIARY OF THE DEAD is almost a slap in the face to people who are so reliant on the convenience of technology, and that's why I like it. But, unfortunately, DIARY OF THE DEAD also reveals Romero to be pretty clueless when it comes to the things he's trying to satirize. God bless him. Picking this movie apart and harshly criticizing it would be too easy. Romero had a great idea and that's pretty much where it ends. Fun movie, though. I still liked it.
Posted by Aaron at 11:20 AM