Out of 224 slasher movies released between January 1, 1980 and December 31, 1989, one movie was voted by you as the King of all 80s Slasher Movies. And that movie is none other than 1984's A NIGHTMARE ON ELM STREET, directed by Wes Craven. 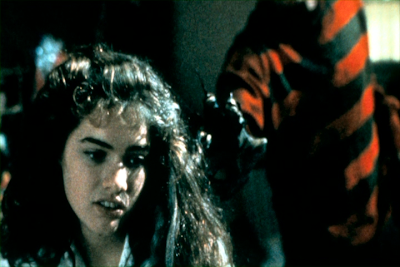 During the qualifying round in which it was fair game between all 224 movies, NIGHTMARE received more votes than any other film, qualifying it for the First Round of the tournament. In the First Round, it was randomly paired up against 1981's HAPPY BIRTHDAY TO ME and eventually destroyed the Canadian slasher with 86% of the votes which was easily the biggest ass-whipping of the tournament. It then went on to the Second Round to face Dario Argento's 1982 Giallo TENEBRE, which it beat with 64% of the votes. The Semi-Finals saw NIGHTMARE beat one of its sequels, 1987's A NIGHTMARE ON ELM STREET 3: DREAM WARRIORS, with 68% of the votes for that particular pairing.

Finally, it came down to the last two 80s Slasher Movies that were left standing after the dust had settled and the body parts were collected: A NIGHTMARE ON ELM STREET and 1980's FRIDAY THE 13TH. It goes without saying that NIGHTMARE won, and it did so with 75% of the votes. It's only appropriate that the last two movies to make it to the Finals are two of the most popular and influential Slasher movies ever made, and because of your votes it should settle once and for all who the undisputed Champion of 80s Slasher Movies is. Well, at least according to those of us who are part of the horror blogging community anyway. Thanks to everyone who voted, and stay tuned because I have something special planned that will kick off some time on Sunday morning. 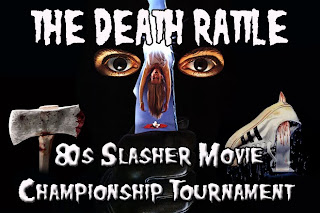