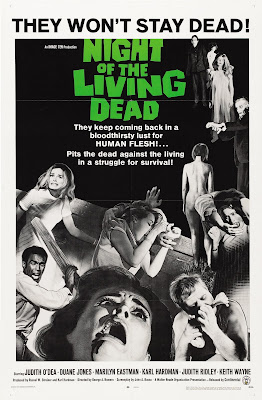 Click here to see the entire list
#1 NIGHT OF THE LIVING DEAD (1968) - A lot of people credit Romero's NIGHT OF THE LIVING DEAD as being the birth of the modern-day zombie film. This may be true, but let's not forget the fact that Romero was heavily influenced by Richard Matheson's I AM LEGEND. He took the vampire holocaust aspect of Matheson's novel and put his own twist on it. Instead of vampires we had ghouls. The ghouls became zombies and the horror genre hasn't been the same since. A prototypical survival horror plot, the low-budget-but-effective black and white look, and, in my opinion, one of the best ironic endings in the history of horror cinema are what make NIGHT OF THE LIVING DEAD my favorite George Romero movie. 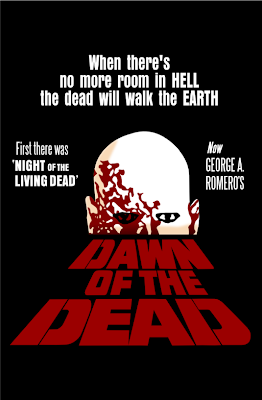 #2 DAWN OF THE DEAD (1978) - While NIGHT OF THE LIVING DEAD got the severed head rolling, its "sequel" DAWN OF THE DEAD is considered to be the movie that truly shaped the zombie film as we know it. It honestly took me a long time and a few repeat viewings before I really began to appreciate this movie. I somehow avoided seeing it as a kid. It doesn't hold a special place in my heart and it never will. But, as an adult watching it, I couldn't help but pick it apart and compare it to other zombie films out there when in reality it is every other zombie film out there. I've heard some people call DAWN OF THE DEAD the "greatest horror movie ever made". I disagree, but then again the "greatest horror movie ever made" is a matter of opinion, not fact. Truth be told, I enjoy and seek out a lot of other zombie movies more than I do this one. The bottom line, though, is that no matter how much I do or don't enjoy this movie, there's no denying that it's a truly awesome piece of horror cinema that's socially relevant and extremely high on replay value. One of the most important horror films ever made. 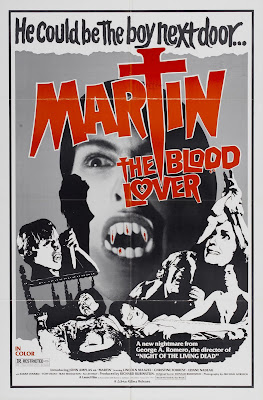 #3 MARTIN (1977) - If anything, MARTIN is proof that George Romero is capable of doing something other than re-hashing the same old zombie movie over and over again and doing it well. Personally, I consider MARTIN to be an extremely underrated horror movie. Romero himself calls it his favorite film (that he's directed). Like other Romero films, slow, boring, and badly paced in spots, but a brilliant idea nonetheless. This is a glimpse into the life of a young man named Martin, who thinks he's an eighty-something year-old vampire. He's not your typical Hollywood vampire, though. He doesn't have fangs and he can't fly or turn into a bat. He can go out during the day anytime he wants to. He likes ice cream sandwiches. But he needs (wants?) blood, and the way that he goes about satisfying his craving for blood is a bit disturbing to say the least. Is Martin really a vampire or is he simply just a troubled young man in need of psychiatric help? MARTIN takes the vampire genre and not only turns it on its ear over thirty years before LET THE RIGHT ONE IN did, but deconstructs and mocks it in the process. Ex-cellent, Mr. Romero. Ex-cellent. 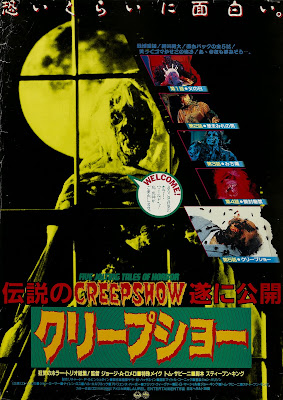 #4 CREEPSHOW (1982) - Zombies, cockroaches, monsters, meteors, Stephen King covered in moss, and Ed Harris dancing. Take your pick. A collaboration between two "masters of horror" George Romero and Stephen King, CREEPSHOW is my favorite horror anthology movie of all-time. Sometimes. There are so many good ones out there, but this one holds a special place in my heart. It's the only Romero movie (unless you count CREEPSHOW 2, which he only wrote) that I saw as a kid. The nostalgia factor and my overall level of enjoyment with this one in comparison to Romero's other films are extremely high, and CREEPSHOW is just a really fun horror movie in general, with a good cast, memorable moments, a nice variety of segments, and a lot of style. Argento-ish blue and red lighting and interwoven animation give it the aesthetic of an EC-style comic book bursting out of the pages and all up onto your scrizz-een. 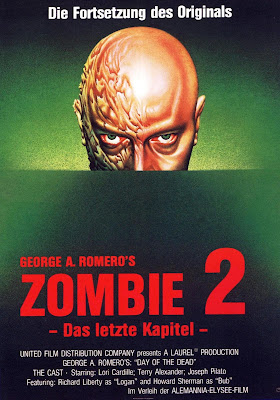 #5 DAY OF THE DEAD (1983) - The third in Romero's "Dead Trilogy". For a long time this was my favorite of the three. Now, not so much. I still like it a lot for a number of reasons, though, and it mostly has to do with the zombies. It features one of the most iconic (and coolest) zombies ever - Bub! The zombies look a lot nasiter as opposed to a bunch of extras with green face-paint (DAWN OF THE DEAD). The shot of the zombies being lowered down on the elevator to the underground shelter is such an awesome sight to behold. From the elevator scene on, all Hell breaks loose and we get some gruesome pay-offs (including the legendary final death scene - "Choke on 'em!"). I also appreciate the - no pun intended - dead serious tone of the film. There's nothing funny or quirky about this one. The most mean-spirited George Romero film? I'd say so. It's the end of the world as we know it, but the chances of everything being fine are slim to none. People may consider this to be the weakest of the three original Living Dead films, but it more than stands on its own and is still better than most conventional zombie movies that have been released since.