Me and this movie have a history. I was pretty obnoxious as a child, so my mom would often stop by the video store on her way home from work and come home with a handful of VHS tapes to keep me out of her hair. The thing is, she would rarely get me "childrens movies". I mean, it's not like she would bring home CANNIBAL HOLOCAUST or anything, but she did have a tendency to be pretty lenient with what I watched. Well, one day she brought home a tape that blew my mind - it was a VHS copy of MASTERS OF THE UNIVERSE. 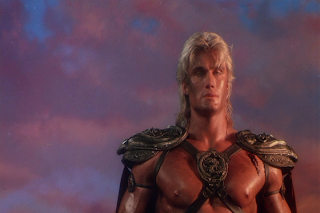 I wasn't a huge fan of the cartoon growing up, but I had a large collection of the action figures and was familiar with the He-Man mythology. The reason why this film came as a huge surprise to me at the time is because I didn't even know it existed. Mind you, I was like seven years-old at the time, so it goes without saying that I wasn't the most up-to-date person when it came to films. Nonetheless, having this tape in my possession was pretty amazing to me at the time. I could actually see awesome characters like Skeletor and Evil-Lyn as living, breathing people! I'm pretty sure I stopped whatever I was doing at the time and watched it immediately, most likely after thanking my mom repeatedly for being the bestest mom ever. And yes, when it was all said and done, I thought this was the greatest thing I'd ever seen. All of that said, MASTERS OF THE UNIVERSE holds a special place in my heart, so my review might be a tad biased. 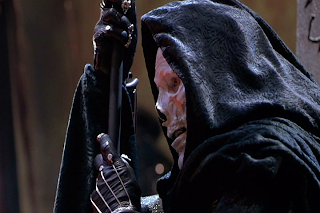 I haven't heard or read too much about this movie over the years as far as what people think about it, but it seems like one of the main problems people have with it is that it introduces new characters who've never been part of the He-Man mythology up to this point. I was somewhat surprised by this back in the day as well. While we do get to see some of the main established characters turn up, there are a lot of key players who are either left out of the film or are given smaller roles than in the cartoons and whatnot. I adored some of the new characters (and still do), but there was always a part of me that was left wanting. The most prominent of the new characters is a dwarf named Gwildor, who, according to the film, is a locksmith and an inventor. The purpose of Gwildor was to seemingly act as comic relief and be a character who would appeal to children, which is understandable. He's also the guy responsible for creating the film's plot device: a key that can open any portal in the universe. Skeletor wants the key, He-Man has the key. They all end up on Earth, the key gets lost, some teenager finds the key and tries to play it like a synthesizer, and pandemonium ensues. Speaking of Gwildor, he could've potentially been a very annoying character; he is annoying at times, but for the most part he's effectively comedic and has some good lines.

MASTERS OF THE UNIVERSE presents the characters in a fish-out-of-water scenario, which was something that was very prevalent in films in the late 80s. The comedic tone here works for some people, and for others it fails. Parts of it are indeed cringe-worthy, but it's fine. We also get a friendly pissing contest between Man-at-Arms and Teela throughout the film for whatever that's worth. Perhaps the strangest thing to come out of these characters being stranded on Earth is a scene that make a commentary on carnivorous diets and nutrition. It almost seems like the screenwriter was a Vegetarian or Vegan and wanted to make a statement about the consumption of meat through this film. It's a brief scene, but anyone who's seen this film may know what I'm talking about. 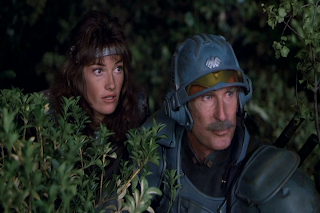 It's arguable that the most out-of-place characters in the film are Kevin and Julie (a young Courteney Cox). Kevin is the kid who finds Gwildor's key, which results in him and his girlfriend Julie being caught up in this war between He-Man and Skeletor as they both essentially race against time to locate the key - in He-Man's case it's to get back to Eternia to save the Sorceress, and in Skeletor's case it's to use it for evil purposes of course. But, seeing as the film is set on Earth, it's a given that there will be some focus on human characters, if anything to juxtapose He-Man and everyone else. I understand why the characters of Kevin and Julie are there, but you know... they do kinda take away from the action we'd all expect from a He-Man movie. They're not awful characters though. Julie is going through a grieving process for reasons that are explained in the film, so she has some interesting stuff going on even though it feels like it belongs in another movie. Strangely, the actors who play her parents look identical to Man-at-Arms and Teela, which was apparently a bizarre coincidence. 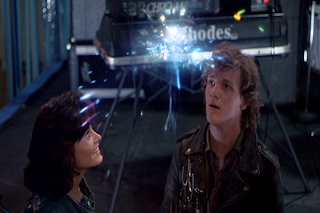 Now let's get into the positives of the film. To do his dirty work, Skeletor sends some warriors to Earth to pick up on He-Man's scent and locate Gwildor's key. Personally, I love Skeletor's henchmen, despite the fact that only one of them (Beast Man) is an actual character from the mythology. They all vary in terms of looks and styles, and they all reek of having back-stories that are never elaborated on for obvious reasons. There's also a lot of detail put into their costumes and makeup effects. I was always most drawn to Saurod, who has a cool reptilian look. In general, most of the visual elements of the film are pretty awesome, all things considered. The costumes range from decent to outstanding, and the overall design of the characters and sets are great. 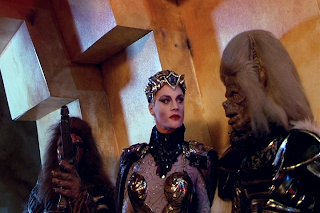 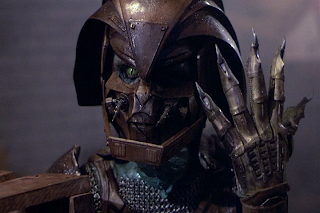 It goes without saying that I'm somewhat blinded by nostalgia when it comes to this movie, but I honestly can't find a whole lot wrong with it. Regardless of the fact that the mythology isn't represented particularly well, MASTERS OF THE UNIVERSE is about as close to a cartoon come to life as it could've possibly gotten, which is a plus considering it was aimed at kids but still had enough of an edge and comedy to appeal to an older crowd. Dolph Lundgren, amazingly, doesn't look he's about to fall asleep for once, Meg Foster is awesome as Evil-Lyn, and Frank Langella does a good job of portraying Skeletor as an overdramatic diva - the cartoonish, fantasy movie equivalent of a lonely old gay man who hates everyone. MASTERS OF THE UNIVERSE is also paced well. There aren't a lot of points in the film where things slow down. The plot relentlessly move along and constantly sets up new set-pieces or challenges for the characters. Too bad Albert Pyun never got to make the sequel. Now that would've been interesting.