While not as highly regarded as some of their Asian peers, Hong Kong filmmaking duo The Pang Brothers (Danny and Oxide) have been cranking out some interesting genre movies over the years, most notably THE EYE and its sequels. It should be said that I personally haven't seen any of the EYE movies, but I've seen the remake with Jessica Alba which was pretty atrocious. I've seen some other films of theirs, though, all of which have been atmospheric and visually interesting at the very least, so it didn't take much for me to take the plunge on THE CHILD'S EYE, which was shot and released in 3D. 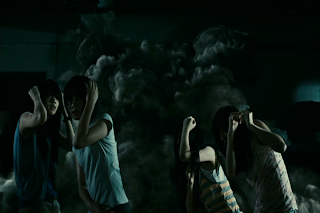 So a group of good-looking young people from Hong Kong visit Thailand for whatever reason. As their trip ends and they're en route to the airport to fly back home, all of the roads are shut down due to a massive protest involving hundreds of angry Thai people. As a result, they're forced to take shelter and stay at a ratty hotel nearby. By this point, it's already established that one of the characters, Rainie, is into ghost stories, urban legends, and folklore. Naturally, it turns out that there's some weird shit going on in the hotel they're staying at. It's suggested initially that there's an invisible entity latching itself on to the group of protagonists, and from there it turns into a series of ghostly encounters that get progressively more intense as the movie goes on. 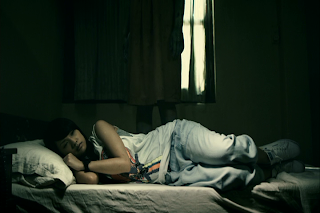 THE CHILD'S EYE certainly isn't the most entertaining or well-paced horror movie I've ever seen, but it's fairly successful in terms of cool visuals, which goes back to what I said about The Pang Brothers earlier. I'm sure if I were to delve more into their filmography it would become even more obvious as to why they're not on the level as some of the more well-known Asian horror directors, but even based on this movie and the other two or three of theirs that I've seen, I think it's safe to say that they put more of an emphasis on style and mood over substance. That said, THE CHILD'S EYE has some potentially eerie moments and creepy visuals that would've been more effective in a different context. Instead, the film as a whole comes off as a bit silly because of unevenness of comedy and horror. For example, there's a weird sub-plot involving a little boy with the face of a dog; in the right context it could be unsettling, but it's far from the case here. 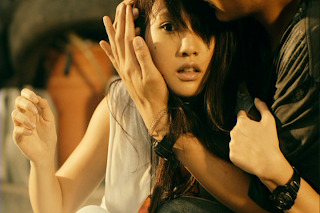 As a whole, THE CHILD'S EYE tends to border on self-parody; a lot of it has to do with the comedic elements and camp falling flat more often than not, but the loud and overwhelming musical stings are also to blame. Speaking of which, another strange thing about this is the music. The score is quite good, but - again - it's used in a really unusual way that doesn't quite work for reasons that I can't articulate at the moment. I'm sure THE CHILD'S EYE sounds like an utter disappointment at this point in the review, but it's not a complete misfire from The Pangs. It's a gorgeous film for the most part. The camera work and shot compositions are great, and it's a "busy" film from a visual standpoint. 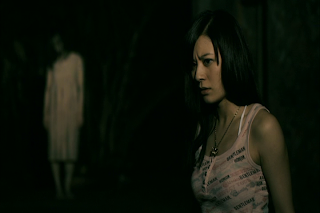 I watched this in 2D, but a lot of the moments in the film that catered to 3D are pretty obvious. For the most part, it's a lot of random shit flying at the camera, but there are moments where the film turns into an overload of neat special effects that would probably look awesome in 3D. For it to look as good as it does in 2D, I'm sure it's a visual treat when watched otherwise. What I took away most from this movie, however, is how pretty the lead actress Rainie Yang is. I'd definitely like to see more of what she's done. The Pang Brothers, though? Not so much. For what it's worth, the first half of THE CHILD'S EYE is really good and moves at a brisk pace, but things go downhill from the middle of the second act onward. In my opinion, the film falls apart big time in the final act once it gets into some weird SILENT HILL type of shit. Overall, it's an interesting mess.