Yep, this here be AMERICAN MANIACS, or AMERIMANIACS for short. I first heard about this movie back in 2010 when I interviewed Ashlynn Yennie from THE HUMAN CENTIPEDE: FIRST SEQUENCE. At the time of the interview, AMERICAN MANIACS was still in production under the title "FETCH". I was excited for Ashlynn at the time. As a fairly new actress, she took a big risk with HUMAN CENTIPEDE that ultimately paid off, so to know that she was already working on other horror movies made me have high hopes for her to be an up-and-coming "Scream Queen" - if anything, just so I could say: "Yeah, I was down with Ashlynn before she got famous." Well, I can't say that I think AMERICAN MANIACS is a step in the right direction for her, but I'll forever be grateful to the gorgeous Ms. Yennie for the interview way back when. 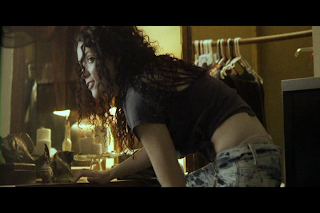 Ashlynn plays a stripper named Starlene in the film. She's married to some loser named Clyde Arbuckle, who apparently has a bunch of money stashed somewhere. In true white trash fashion, Starlene is banging some other guy named Griffin on the side, who's even more of a loser than her husband. The actor playing him looks like David Cross. Starlene and Griffin, along with a show-stealing felon named Punch, plot to find steal Clyde's money and live high on the hog. Little do they know, their intended target is a sick fuck who tortures women and feeds them to his dogs. Essentially, AMERICAN MANIACS establishes all of these flawed characters and sets them up for an inevitable clash. That said, there isn't a likable person in the bunch - not even the town's sheriff who's got some serious skeletons in his closet. 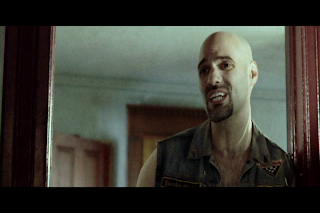 Any movie that opens with strippers and a guitar-driven soundtrack immediately has my attention, especially when one of the strippers is propped up on a pole while striking a Jesus Christ pose. Now that I think about it, I haven't seen any other movie that opens with blasphemous pole-dancing, so I guess that doesn't apply. That being said, it's apparent right from the start that director C.M. Downs isn't a fan of subtlety, and this is something that becomes even more evident as the movie goes along. Although I'm not sure how much of the blame should land on Downs considering this was written by Trent Haaga (DEADGIRL). Either way, AMERICAN MANIACS offers lots of shock value and not much else. 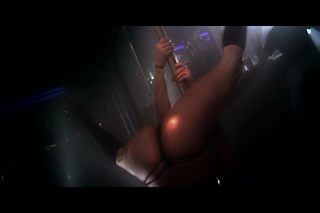 Haaga's script is fine, but I think this would have been much better off in the hands of another filmmaker and a different group of actors. The whole set-up with the characters I mentioned earlier is interesting. I'm totally down with a story in which no "white hats" are established. If done well, there doesn't even need to be any sort of redemption for it to be effective. When the smoke clears and the only person (or people) left standing is an absolute scumbag, it can be a nice, grim alternative to the popular narrative. In the case of AMERICAN MANIACS, though, there's just not enough talent behind and in front of the camera to pull it off. I'm not gonna say who's responsible, but the acting in particular is fucking brutal, and it's what's mainly responsible for dragging this movie down. This honestly has some of the worst acting I've ever seen in my life. 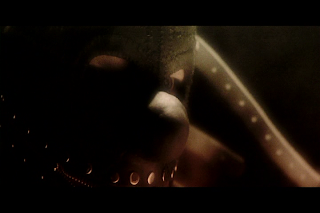 There's the old saying: "If you don't have something nice to say, don't say anything at all." Well, if I actually followed that piece of advice, I wouldn't say shit about this movie. But, at the end of the day, I have zero credentials. Distribution companies and producers aren't exactly knocking down my door for box quotes. I wouldn't even dare refer to myself as a "critic". I'm just some dude who writes about movies. Should the people involved with AMERICAN MANIACS somehow stumble upon this review, I hope there are no hard feelings. A group of people got together, worked with each other, developed their skills, bonded, and busted their asses to make AMERICAN MANIACS. But holy shit, I do not like this movie. At all. It sucked the energy out of me and made me regret paying 6 bucks for a used copy of it. I'm sorry. What I will say, though, is: this has one of the most fucked-up endings I've ever seen. In fact, it has one of the most fucked-up scenes I've ever witnessed period, but, considering it made me laugh, it's safe to say that they couldn't even get that right.