A disabled Vietnam veteran named Jack Stryker returns home and re-adjusts to life as a civilian. Unlike most traumatized characters in post-Vietnam movies, he seems to be doing fine and isn't haunted by the war; Stryker has his own cabin out in the woods and successfully becomes reacquainted with his old flame. However, this all coincides with a Manson Family-like cult wreaking havoc in the nearby area and sacrificing humans to a higher power. The cult eventually plays an important part in the story in a way that attracts the attention of not only Stryker but of some fellow Marines who he served with in 'Nam. THOU SHALT NOT KILL... EXCEPT essentially turns into a revenge movie with the Marines versus the cult, and a bloodbath ensues. 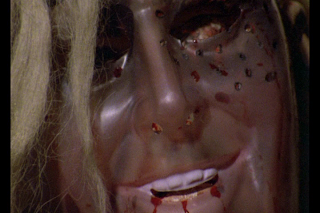 Originally titled "STRYKER'S WAR", THOU SHALT NOT KILL... EXCEPT is an independent film that was produced in Detroit, Michigan and features a cast made up entirely of Michigan natives. A few weeks ago, the post-Vietnam movie WHO'LL STOP THE RAIN was on my mind and I reached out to some friends about similar films to check out. One of them suggested this particular movie, which I'd never heard of until he mentioned it. It wasn't exactly the type of post-'Nam flick I was looking for, but I knew I had to check it out for different reasons. The main selling point for me was its ties to the original EVIL DEAD, most notably the fact that it stars Sam Raimi and it originated from a short film that starred Bruce Campbell in the lead role. Also, the list of titles I had for Michigan movies for my 50 States theme weren't exactly appealing, so I figured I'd use this one and kill two birds with one stone. While it's not specifically set in Michigan (it's given the generic setting of "United States"), it was filmed in the state and it's a collaboration of filmmakers and actors from Michigan. 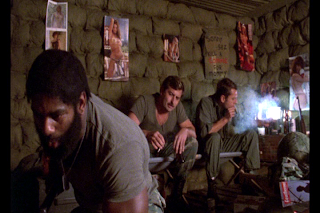 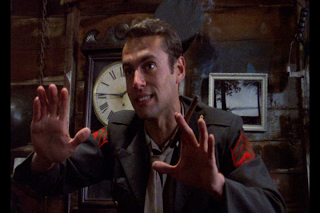 THOU SHALT NOT KILL is interesting, in that it feels like three separate movies that tie into each other: a Vietnam movie, a post-'Nam movie, and an exploitation movie. The opening 15 minutes are supposed to be set in the jungles of Vietnam and explain how the lead character got wounded while in combat. This section of the film also establishes the camaraderie and brotherhood between a small group of Marines that carries over into the rest of the movie. From there, the film goes back to the United States and focuses on Stryker's life after the war and subsequently turns into a full-blown exploitation movie once the revenge angle kicks into gear. 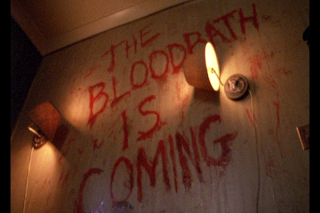 The only things, to me, that really expose THOU SHALT NOT KILL is a low-budget and independent production are the ADR/sound effects and some of the acting. Interestingly, Bruce Campbell actually worked on the sound editing for this film and is responsible for a lot of the film's sound effects, some of which were recycled from the first EVIL DEAD. Campbell unfortunately couldn't star in the film and reprise his role as Jack Stryker from the original short movie because he was a SAG member by this point and technically wasn't able to. However, Campbell is very much present in spirit; he was a stand-in for some pick-up shots and a majority of the interior scenes were filmed in his garage. Speaking of EVIL DEAD, its director, Sam Raimi, is fun to watch as the nameless Manson-like cult leader in what can only be described as a scenery-devouring performance. His brother Ted also gets a decent amount of screen time (albeit under a mask) as one of the sadistic cult members. As far as the other cult members, some of them look rejected villains from an 80s Troma movie. 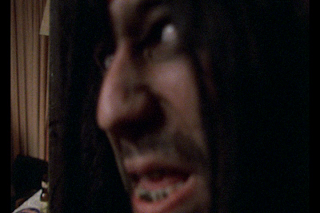 All things considered, the people who worked on this did a great job of turning nothing into something, and by that I mean making the best of whatever resources they had to make a campy but (in some ways) believable film. For example, the Vietnam scenes are kinda silly and aren't exactly of the highest quality, but the people who made this clearly tried their best when it came to utilizing stock footage, editing it together with footage that was shot in the woods and fields of Michigan, and disguising it all for the sake of portraying the Vietnam war. Whether they were truly successful or not is subjective, but I appreciate the hard work put into this by the cast and crew. Another example of what I'm talking about would be the back end of the film that sees the Marines going to battle with the homicidal cult. The back end is kinda sloppy and anti-climactic in spots, but it's satisfyingly violent in the context of it being an exploitation movie (the body count is very high), and it's certainly reflective of a group of people having some fun and making an indie movie out in the woods. Overall, THOU SHALT NOT KILL is well-made for what it is, aware of what it is, entertaining, and interesting watch as a fan of not only EVIL DEAD but of Sam Raimi, Bruce Campbell, and that whole crew.