On what seems like a normal day in rural Iowa, a citizen of a small town walks onto a baseball field with authority in the middle of a game, and he's brandishing a shotgun. Luckily the local Sheriff, David Dutton, is there to intervene, but the disturbed local is gunned down and killed in the process. What would cause a supposedly well-liked person to do such a thing? This is a question that the guilt-stricken Sheriff asks himself following the incident, especially as he comes face to face with the woman he widowed and the teenage boy he left fatherless. However, it seems as if more of the locals are experiencing the same sudden and drastic changes in personality and demeanor. There's clearly an ailment going around, and it's causing people to become emotionless and develop harmful tendencies. 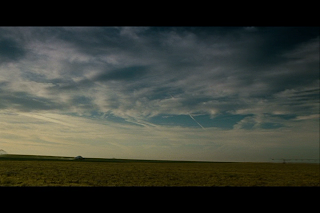 Aside from some of the locals behaving strangely (and violently), a corpse attached to a parachute is discovered by some hunters in a nearby swamp. Considering the size of the town, the Sheriff is tackling all of these problems with only the help of his loyal Deputy, Russell Clark. Needless to say, these cops are really earning their paycheck. And shit gets crazier (no pun intended) when all of these incidents lead to the town being stormed by a machine gun-wielding soldiers in chem suits who force the town's population into a large quarantine area that's eventually compromised by angry rednecks. Most importantly, I learned that there are swamps in Iowa. 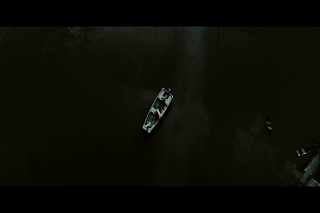 Basically, THE CRAZIES turns into a WALKING DEAD-ish apocalypse/survival movie when the Sheriff and a small group of characters hit the streets and embark on a quest through a maze of wrecked vehicles and burning debris, all while hiding from both the military and the people who are infected with whatever virus is floating around. They're faced with various obstacles on their journey and tension eventually mounts between them, which adds an unreliability to the storytelling, in that you often question who's infected or who's simply exhausted and frustrated by the circumstances. That said, the stakes are pretty high when you consider the severity of the virus. 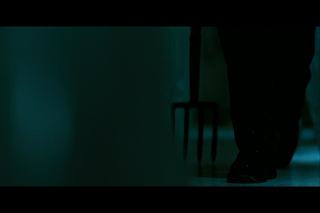 I first saw this remake of George Romero's THE CRAZIES on a rare trip to the movie theater, despite the fact that I try my best to avoid financially-supporting remakes at the box office. I don't remember why I decided to see it on the big screen. I think it had to do with some of the decent buzz from the horror community. If that was the case, they were wrong. I fucking hated it. Now, not so much. I was a bit more forgiving of it this time around, but the same things annoyed me about this movie as when I first saw it. For one, parts of it are contrived as fuck, and anyone who's seen it will definitely know what I'm talking about. The other thing about this movie that bugs me is the amount of cheap jump scares that rely on loud noises rather than building tension. All of that being said, though, with the film's problems in mind, I was able to focus more on its positives this time around. 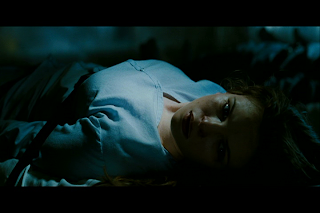 In the spirit of George Romero, this remake has a built-in message. There's an obvious commentary here on the Iraq War, the misinformation (or lack of information altogether) provided by the media in regards to certain tragedies, and government cover-ups. On top of that, the film addresses the fact that the working-class are the ones who are left to suffer. This film's commentary is especially evident (and a bit heavy-handed) when one of the guys in chem suits is unmasked and revealed to be a young soldier who's simply carrying out orders based on the minimal information provided to him by his superiors. Does the commentary benefit the film in a significant way? Not necessarily, but it's there, and it inherently has a lot more to say than the average horror flick. 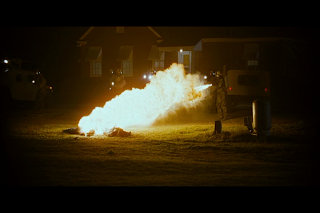 Another thing worth mentioning is the amount of violence in THE CRAZIES. One thing you can't accuse this movie of is being tame and holding back on the violence, because there are shootings and stabbings galore. For some reason the violence never really stood out to me when I first saw this (probably because the film has already lost me early on), but it's definitely a highlight for me this time around. And THE CRAZIES is also a lot more impressive from a production standpoint than I remember. The film looks great, it features some decent pyrotechnics work and stunts (burning houses, explosions, etc.), and the people who made this really exploited the outdoor settings, landscape, and architecture - especially some of the unique local architecture in Iowa and wherever else they shot this. My man-crush Timothy Olyphant is good in this as well, but sometimes he sounds like he's delivering his lines through a jaw that's wired shut. Overall, this ended up being a nice surprise. I still think I would've reacted to it negatively had this been the first time I'd seen it, so perhaps this will go down as one of those movies that required more than one viewing out of me in order to appreciate it.