Two people wake up in what appears to be an incinerator surrounded by the charred remains of dozen of humans. Strangely, the incinerator is also littered with swords, helmets and armor, as if they were somehow transported back in time to the medieval ages. The incinerator leads them out into a series of tunnels where they meet other people who are just as lost and confused as they are; it ends up being sort of a CUBE/SAW-esque scenario where they're unable to escape and are forced to participate in a series of challenges. Amongst other things, the group of characters discover traps, torture devices, and Bai Ling. And, as usual, Bai Ling is wearing clothes that seem better suited for a five year-old. 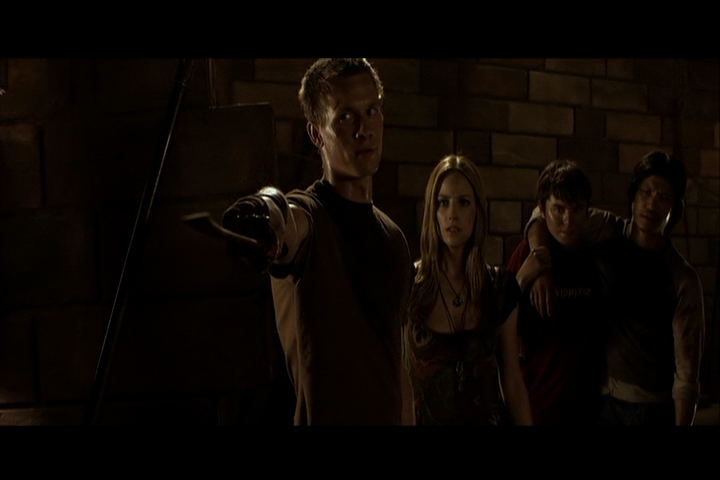 As the film goes on, there's some background revealed about each character and why they could have ended up in who-knows-where. But mostly it's just them walking through an elaborate underground system and trying to find a way out. 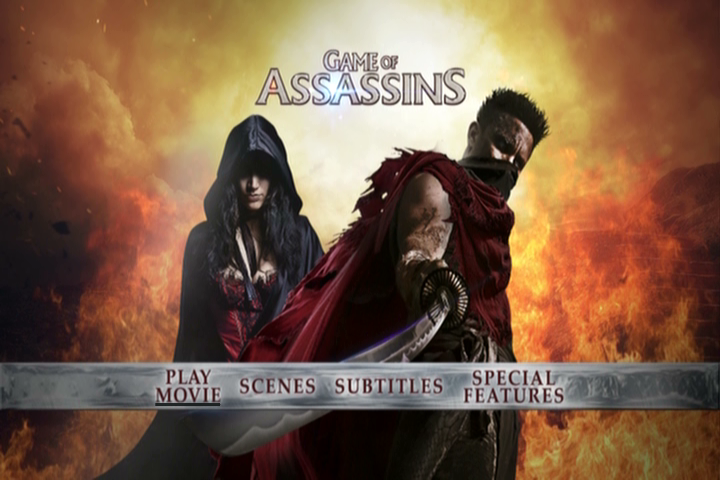 So I was browsing the new release section at the local video store as I tend to do and this movie's DVD artwork grabbed by attention, so I thought I'd give'r a look. Unfortunately none of the characters on the cover (pictured above via the DVD menu) - nor anyone even remotely resembling them - appeared in the movie. Given the synopsis and the appearance of said characters, I expected something resembling Oliver Stone's SEIZURE, where antagonists who are seemingly from another time-period or dimension are forcing a group of people to participate in cruel acts - all under the guise of some sort of metaphorical message. But hey, I can't fault GAME OF ASSASSINS for not delivering that; my own expectations are to blame. Regardless, what I ended up with was a bunch of mostly uninteresting characters interacting with each other while trapped, disoriented, etc. GAME OF ASSASSINS inherently features a few horror pay-offs here and there, but they don't make up for how boring the movie is. It drags for being under 80 minutes long. The film's low budget is also front and center throughout, especially when it comes to the incredibly cheap-looking sets. 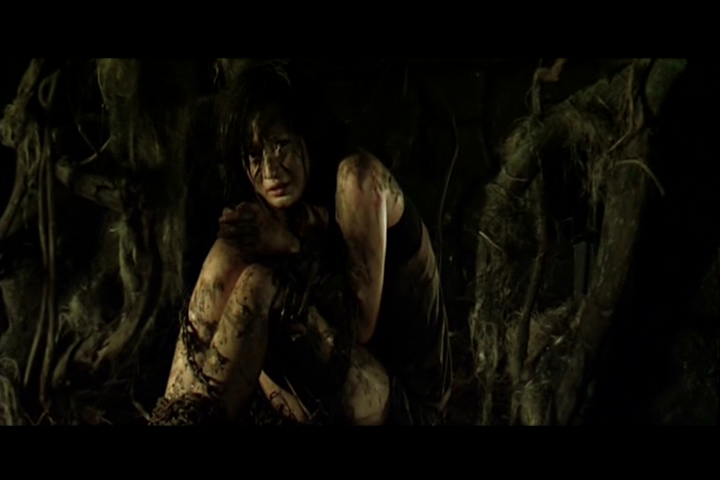 Storywise, there's enough going on to make you want to see how everything plays out but barely. Earlier I mentioned SAW and CUBE, but it's probably more along the lines of the latter in a lot of ways. There are too many similarities for me to get into. The way everything is set up in terms of why the characters are there and what these strangers have in common is interesting but the pay-off is blah, although I will give the film credit for going in a rather peculiar direction at the very end. So yeah, if watching this has ever crossed your mind for whatever reason, I wouldn't dissuade you from doing so, but I would tell you to keep two things in mind: 1) it's low budget as fuck and it looks it, and 2) if you've seen CUBE, this is a lesser variation of that. I'd also advise that you make a drinking game out of this viewing experience if you decide to watch it with a group of people. The rules for the GAME OF ASSASSINS drinking game are simple: each person picks a character and takes a shot every time their designated character is double-crossed by someone. Some will end up drunker than others, but, unless someone has a high tolerance for booze, everyone will be drunk (or at least buzzed) by the end of the movie.