I wouldn't go so far as to label HUNDRA a "Sword and Sorcery" film, but it's a film that takes place in the same time period as movies like CONAN THE BARBARIAN and whatnot. The lead character, Hundra, is a powerful warrior who belongs to a tribe consisting entirely of independent, man-hating women. They only use men for mating purposes, and they're so anti-male that if one of the women gives birth to a boy, the child is discarded. One day, while Hundra is away from the village, a tribe of barbaric males invades their isolated area in the forest and proceeds to rape and viciously slaughter the entire tribe of women. Oh, the irony. Hundra eventually returns and finds the village in shambles, littered with the corpses of her fellow man-haters. You'd think it would turn into a revenge movie where Hundra ventures out and slays every single male she can get her hands on, but it's surprisingly not the case. 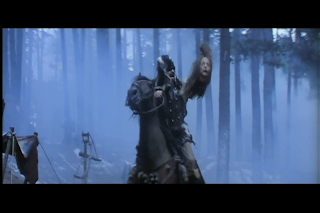 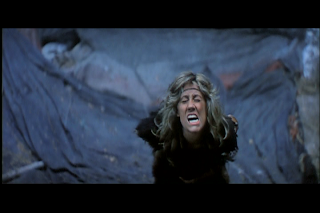 Hundra eventually seeks out the guidance of a crazy blind woman who lives in a cave and is protected by an army of midgets. According to this blind woman, Hundra's destiny is to rebuild her tribe and reproduce female warriors who are inherently just as powerful as her, but in order to do so she obviously needs to have a male plant his seed inside of her. This is a challenge for Hundra, seeing as how she was not only raised to dislike men, but because men were responsible for decimating her village and murdering the rest of her tribe. Another twist is that she's supposed to seek out a specific man to impregnate her, but she has no idea who it is, so apparently she has to seduce a bunch of men until she finds the right one. 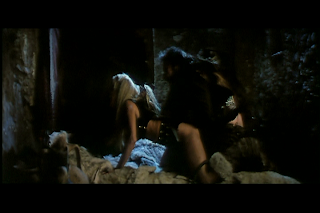 I have to say, HUNDRA turned out to be something that I wasn't expecting at all, which is neither a good nor bad thing. I hadn't even heard of this movie up until a couple of months ago - coincidentally, not too long before it was suggested for me to review. That being said, I was expecting a female alternative to CONAN, or an exploitative Corman-esque type of Sword and Sorcery movie, but HUNDRA turned out to be neither. This film puts a huge emphasis on female empowerment and it doesn't really fall into the traps of the Sword and Sorcery genre. In other words, it's a bit more unconventional than I was anticipating. HUNDRA opens with some cheesy yet nasty moments of violence and rape, but then it turns into a comedy in which Hundra undergoes an extreme makeover and essentially becomes more of a "proper" well-mannered woman, all while taking a female member of a tribe under her wing and grooming her to be more independent and less subservient to the men around her, resulting in a weird balance of exploitation and lighthearted comedy. 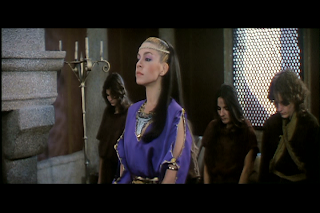 Even though it was quite evident from the start that HUNDRA was gonna be a cheese-fest, I was genuinely impressed by the aforementioned village invasion scene, which was quite simply insane. What I liked about this scene is that it wasn't one-sided at all despite what the ultimate outcome would lead you to believe. It was great to see this group of female warriors throwing down with a bunch of men; not necessarily because of how it portrayed the women, but because it was just entertaining and it's not something you normally see - at least on the scale of this battle sequence anyway. The filmmakers must have spent a fortune on horned Viking helmets and furry boots. On top of that, the film was scored by Ennio Morricone of all fucking people, so you have this insane battle sequence in the forest backed up by epic Morricone music. It's quite surreal.

Laurene Landon, who played Bruce Campbell's mistress in MANIAC COP, brings a lot of energy to the table as Hundra, and the character she plays is kind of a bad-ass, although there were numerous times where she could have easily been killed by her opponents. Because of how her character is portrayed, she never uses her sex appeal to gain an advantage on her adversaries, which was somewhat disappointing for me since I was open to seeing some nudity in this film, but at the same time I appreciate that element of Hundra's character. That being said, if anyone goes into this expecting a Corman-esque type of film that features tons of nudity and gruesome violence, they'll come out of it sad and disappointed. Seeing as most of the film revolves around Hundra trying to find a man to have sex with, you'd think it would build up to this amazing sex scene, but it doesn't. In fact, the only time we see Laurene Landon nude is when she's riding a horse. Yep, naked horseback riding. Beggars can't be choosers, right? I'll take what I can get. 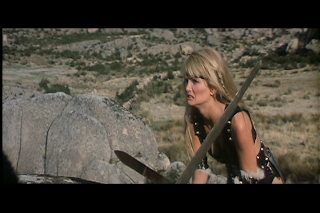 The highlight of HUNDRA, for me, aside from the massacre that takes place at the beginning of the film, was the pairing of Hundra with another female character and how they benefited each other. Also, the actress opposite Laurene Landon (Maria Casal) was pretty hot. While I do appreciate this movie for being "different" and defying expectations and featuring strong female characters, I also thought it was too long and kinda boring in spots, which goes back to my expectations of this being a film with a bit more action in it. If the female empowerment twist sounds like something you'd be interested in, I wouldn't discourage you from watching it, as it's not a waste of time by any means. Personally, I'd rather stick to the more conventional and absurd Sword and Sorcery films of the 80's. The screenshots in this review are from the OOP Subversive release, but you can find this film in certain Mill Creek box sets if you're interested in watching it.