Lead character Elizabeth successfully gets a grant for a project that revolves around connecting with complete strangers over the internet. Elizabeth will be logged into a Chat Roulette type of website called The Den at all hours of the day and record every interaction with people from all over the world. The goal is to basically video chat with as many people from as many parts of the world as possible. In the process, she comes across her share of trolls and perverts and downright scary people, but it always goes back to one profile in particular. 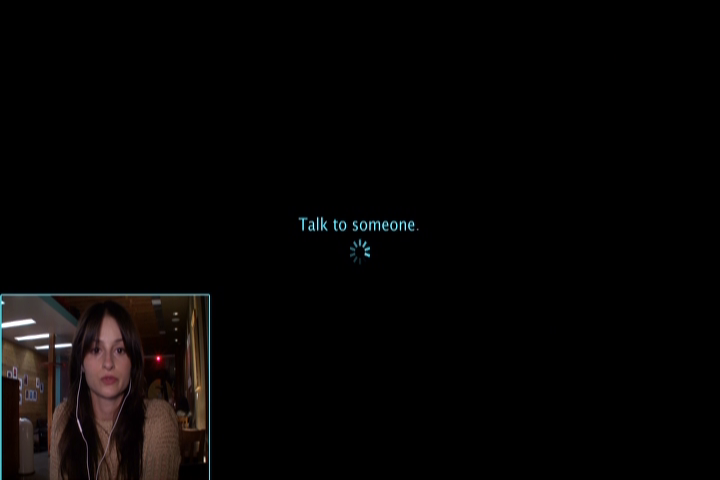 This mysterious profile always brings up the same still photo of teenage girl. The person on the other end of the profile prefers to have text-only chats and refuses to let their voice be heard or their face seen. There's also something going on with Elizabeth's computer (specifically her Den account) being hacked in the middle of the night. Well, one day, in the middle of a chat session with this person, the video suddenly turns on and she sees the girl from the picture being murdered in a rather quick and shocking manner. Naturally, she contacts the police and reports what she saw, but the film does everything in its power to keep the police out of the picture for the remainder of its running time, whether it be the Cyber-crimes unit brushing if off as a hoax or claiming there's not enough evidence to proceed with an investigation. From there, it seems that the person responsible for the murder is setting his (or her) sights on Elizabeth and those close to her. A whole lot of fucked up and creepy shit ensues. 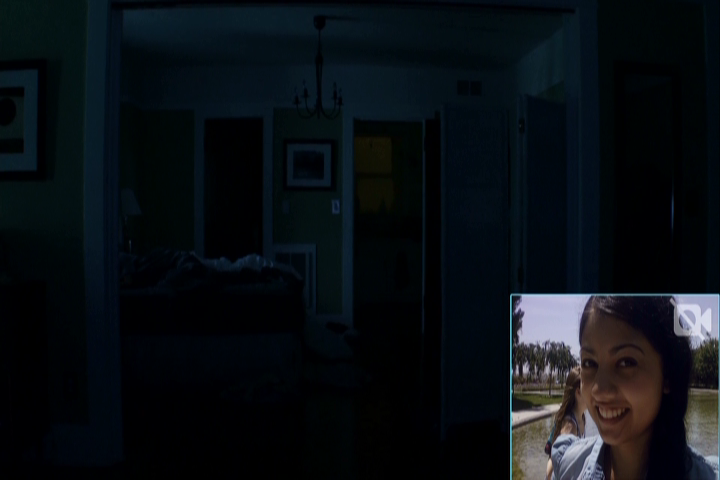 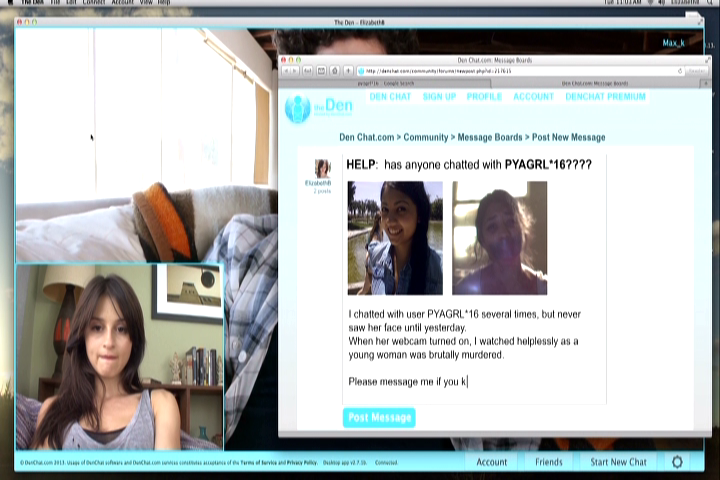 The whole video chat project of Elizabeth's is simply an excuse to set up the film's motif. That said, the entire movie is shown as if we're watching Elizabeth's computer screen. She communicates with everyone via webcam and computer, and the people she actually has physical contact with are right there on her webcam and being recorded with her. So we're seeing all of her video chats and all the fucked-up things she sees, literally, from her point of view. Stylistically, this is a very unique and creative film that takes the handheld found-footage type of horror movie to a new level visually. 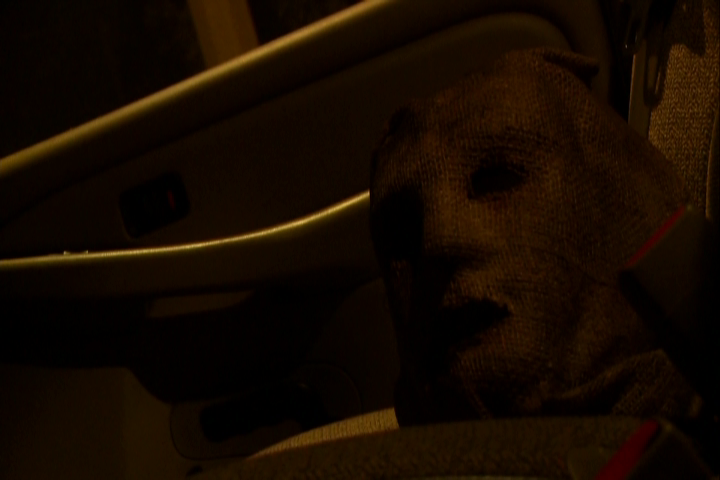 For what it is, this is a pretty well-made movie? I guess? I don't really have much to compare it to, except for maybe MEGAN IS MISSING, which also focused on the dark and horrifying side of the internet and utilized a similar type of found-footage-by-way-of-everyday-technology gimmick. And, while it was indeed quite shocking, MEGAN was not a very well-made film from a technical standpoint.

In particular, I love the unpredictability of the initial video chats and the subsequent cyber-stalking. And I don't mean unpredictable in the sense of "Who's gonna pop up on Elizabeth's screen next?" but rather seeing some of these people and anticipating what they'd do next. Some of them end up being normal, some of them are clearly out of their fucking minds from the jump, and some of them start out as being nice and charming but end up being complete trolls. That said, I think this would have worked slightly better as a mystery, with the big pay-off being the motives for the person (or people) behind the crimes as opposed to how the film ultimately turns into a slasher and shows the antagonist(s?) in action. Once the curtain is sort of pulled back on what's really going on, the intriguing story is reduced to a series of messed-up scenarios. Still, though, the slasher element is very effective and unsettling - not just because of the gruesome violence that's shown, but also because it's rooted 100% in reality. The internet can be a wonderful resource of information, but there's an extremely dark side of the internet that's very real, and, like MEGAN IS MISSING, this film examines that dark side in a way that personally made me feel somewhat uneasy. Overall, a surprisingly solid and engaging horror movie that way more people should be talking about. Big thanks to Heather for recommending this one. I'm not sure if I would've even heard of it otherwise.