Chas, the strongarm for a group of organized criminals in England, is in the doghouse with his fellow "businessmen" for taking liberties with clients, so when he finally goes too far, he leaves his life of crime behind him in fear of both the authorities and the repercussions for bringing attention to the mob. He somehow ends up moving in with a reclusive artist named Turner (Mick Jagger) and his two live-in girlfriends, and it isn't long before he succumbs to their lifestyle and becomes immersed in a world of sex, psychedelic drugs, and self-discovery. So, how will he react when the mob finally tracks him down? 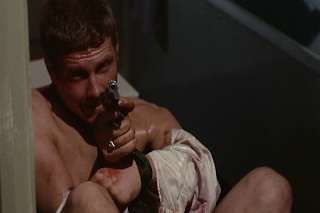 PERFORMANCE was co-directed by Donald Cammell and Nicolas Roeg, with Cammell focusing more on the actors and Roeg setting up the shots and being the more technical of the two. Donald Cammell had an interesting life and career, making only a handful of films (including DEMON SEED) before killing himself in the late '90s. Admittedly, I only knew of Cammell prior to this because of his work with Kenneth Anger. He starred in Anger's LUCIFER RISING as Osiris, and I remember the avant-garde director speaking about him in the film's commentary track. This particular film was supposedly based on Cammell's dealings with both the criminal underworld and the rock n' roll crowd while living in London. 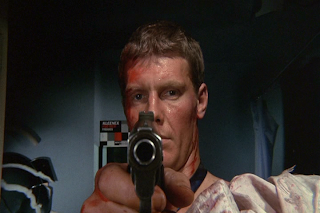 PERFORMANCE is an odd film, and this is apparent right from the very beginning of the movie. The film has a strange opening sequence that starts out with graphic clips of Chas having sex with some random chick (I say graphic because the first thing you see is a close-up shot of his ass and scrotum) intercut with a car driving on the open road. The music, some rock n' roll tune, abruptly fades out with awkward timing to make way for some unconventional and unwelcoming sound effects that sound like they belong in a horror movie. The film's title shows up on a freeze frame of Chas admiring at himself in a mirror as his lady friend gives him oral sex. What ensues is a film that consists of similar methods of unorthodox editing, occasional breaking of the fourth wall, and strange musical cues that consist of everything from moog synthesizers to Bluesy acoustic guitar-playing - and this is before the psychedelic drugs are introduced.

Like another older film I watched for the first time recently, THE LIMEY, I found that once I got used to the unusual editing, watching the rest of the film was not only a breeze, but a rewarding experience. The film is split in half, give or take, with the first half focusing on Chas' criminal dealings and the second half focusing on his time with "ol' rubber lips" and his two female followers. Personally, I found the first half to be interesting on a technical level, but it's the second half that truly blew me away. Mick Jagger is magnetic as Turner in his first ever film role, and his "performance" shows he simply had what it took to demand attention regardless of whether he was on stage with the Stones or in front of a camera. A true alpha male, if you will. The ruggedly handsome James Fox, who's great as well, is like a mix of David Bowie, Christian Bale, and a Cockney Harrison Ford. 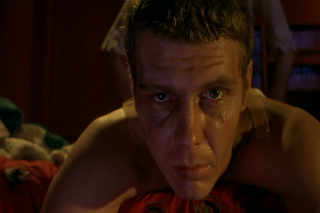 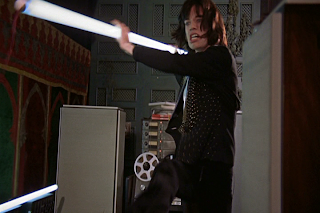 There's also an interesting dynamic between Chas and Turner, and certain elements of their relationship in the film suggest that there's an underlying theme of duality and that underneath all of the psychedelic drug trips and philosopical waxing that they're indeed the same person, or at least extensions of one another. If anything, Turner is the manifestation of the person that Chas is hiding underneath his tough guy exterior, and it isn't until the two meet that he becomes aware of this. There's no evidence to prove any of the above theories, but there seems to be a lot more going on with the two characters than simply a clashing of two people who oppose each other in both lifestyle and personality. Personally, I was a bit startled by the parallels between this and, believe it or not, FIGHT CLUB in terms of the characters and the duality aspect, right down to a certain female character's involvement, an incident takes place towards the end, and the revealing final shot of the film. 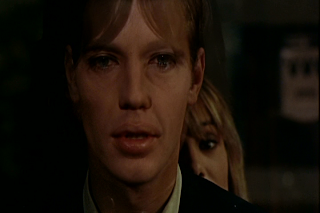 PERFORMANCE was filmed in 1968 but wasn't released until 1970 because Warner Bros. had issues with the original cut of the film, namely the amount of violence and the fact that Mick Jagger didn't appear until late in the film. With Nicolas Roeg in Australia filming WALKABOUT, Cammell worked solely with editor Frank Mazzola to re-cut the film and submit it to the studio. Despite Cammell and Roeg's initial artistic vision being interfered with by Warner Bros., the final product is still amazing. Great performances from the two leads, a full-blown musical-style number towards the back end where Jagger performs an entire song, and an experimental score from composer Jack Nitzsche are just a few of the things that make PERFORMANCE a pretty gosh darn good movie. Go here for some interesting pieces of trivia on the film.